Since 2008, the left-leaning Fundación Alternativas has produced an annual report evaluating the quality of democracy in Spain. This study relies on a survey of social scientists familiar with Spanish politics and society, and has the aim of measuring the 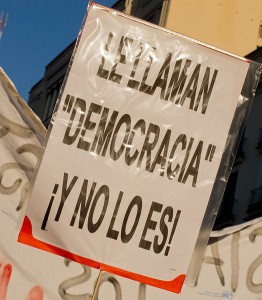 quality of democracy in relation to both processes and outcomes. The report measures the quality of democracy via a set of 59 independent indicators that respondents evaluate from 1 (min) to 10 (max). These indicators correspond to five areas: citizenship and the rule of law, political representation, governance and accountability, civil society and participation, and international relations. The report indicates that there was a worrying decline in the quality of Spanish democracy in 2012 – the year corresponding to the 2013 report. The study produced its lowest ever score, with a result of 5.2 out of 10. With a fall of 0.6 points in comparison to the previous year’s result, it is also the largest decline in score since the first measurement in 2008.

The steep decline in the quality of democracy is primarily related to the deterioration of living conditions as a result of the crisis, declining trust in institutions, Spain’s democratic procedures, and the loss of sovereignty in the context of the Eurozone crisis. The only sphere where the report notes a positive trend is in citizen’s participation via the strong mobilisation of social movements. Regarding the economy and welfare policies the report shows that the economic crisis and the way in which it has been managed have contributed to increased social inequalities. The contribution of economic policies to the decline in the quality of democracy is also related to the perceived insulation of unpopular austerity policies from democratic pressures.

In the sphere of institutional politics and governance, the report notes a clear deterioration stemming from two causes. First, lines of accountability have been watered down by the abuse of legislation introduced by the government and approved by Parliament, which is in theory strictly limited to emergency situations. The lack of transparency in policy-making and the weakness of the opposition have also had an impact. Second, interviewees report a strong increase in perceived political corruption. Recent scandals have affected the Prime Minister, Mariano Rajoy; however the leading opposition party, PSOE, have also been hit by a major scandal in their regional stronghold of Andalucía. The perceived impunity that Spanish politicians have experienced in relation to these scandals has exacerbated the problem. The report views these two factors as the main reason for the sharp decline in citizens’ trust in representative institutions shown in recent opinion polls.

The third sphere where the report finds a strong decline in the quality of democracy is related to the higher political salience of European Union membership. So far, the approach of the Spanish public to the EU has been characterised by an uncritical ‘permissive consensus’ which relates European integration to democratic stability and economic prosperity. The report suggests, however, that issues of EU governance may become more relevant for Spanish politics, as interviewees increasingly perceive EU influences on national politics as a limit on the room for manoeuvre at the national level. To the extent that the EU is perceived as lacking democratically legitimate institutions, any limits to national sovereignty affect the quality of democracy.

Naturally, some aspects of the report may be questionable. The overall goal is not to establish whether Spain is a democracy or not, but simply to assess the quality of the democratic system. As such, this requires developing definitions and measures of the quality of democracy, which raises certain problems. Democracy may be conceived of in a minimalist sense as being limited to free competition in elections, or it can correspond to a more comprehensive definition which incorporates features such as participation opportunities.

Evaluating the results is even more demanding. For instance, the extent to which the involvement of the EU in national politics is considered negative for democracy depends entirely on an individual’s attitude toward the EU and its democratic deficit. Similarly, associating elements such as social protection and social/economic equality with the quality of democracy may satisfy progressive individuals, but this view is not necessarily shared by those with different political opinions.

In terms of methodology, the report is based on an expert survey. It does not intend to represent the entire population of social scientists, and is based on a small and highly politicised sample. It makes clear that respondents are situated to the left of the average Spanish citizen. In this sense it might be expected that respondents would reduce their perceptions of the quality of democracy during a period of conservative (PP) government in comparison to their views during the previous centre-left (PSOE) government.

However, data from previous studies suggest that this is not necessarily the case. The quality of democracy score decreased during each of the years of the PSOE government between 2008 and 2012, with the exception of 2011. The continuity of the study over different years, which allows some stability in the composition of the panel of experts, is one of the most interesting aspects of the report, as it facilitates an understanding of political cycles. Although the report notes the sharp deterioration in 2012, it must also be understood in the context of a situation in which an economic crisis has been transformed into a crisis of governance.

The central question of distrust towards democratic institutions is not unique to Spain. The report suggests that Spanish democracy is not only facing recurring corruption scandals, or a temporary incapacity to produce popular policies as a result of the economic crisis, but also a structural problem of credibility. Spanish citizens can legitimately question the value of political commitments given that both PSOE and PP governments have implemented measures contradicting their election manifestos. While a change of government programme can be expected in a representative democracy, where citizens have the option of choosing a different party in the next election, this appears to be limited in the context of Spanish economic policy as existing policies have been increasingly institutionalised.

Furthermore, it is questionable whether we can speak of a democracy of high quality in the absence of any deliberative element. Since promises made ahead of the 2011 election – among others not to cut public education or health budgets and not to raise taxes – were false, it is difficult to agree that citizens have provided consent to the measures that are being enforced. The lack of credibility of representative institutions may be linked to this systematic breach of commitments. In this sense, one of the recurring arguments of the PP ruling party is that the word of the Prime Minister should have a higher credibility than that of their former treasurer – the now imprisoned Luis Bárcenas. However the credibility of Mr. Rajoy is affected by previous breaches of promises. Perhaps we should also require citizens to be realistic regarding their preferences: many knew that electoral promises were impossible to keep, but institutionalising cynicism is not necessarily a good recipe for a high quality of democracy.

The full report on which this article is based is available here (in Spanish).

This article was originally published in Spanish by Agenda Publica. The English version is re-posted from the LSE EUROPP blog.

Luis Bouza García is the Academic Coordinator of European General Studies courses at the College of Europe in Bruges.

This entry was posted in Spain and tagged Accountability, Corruption, Democracy. Bookmark the permalink.