Posted on September 6, 2013 by Eurocrisis in the Press

The next European elections are just around the corner. They have been moved forward from June to May 2014 to avoid coinciding with the celebration of Whit Sunday–which is a holiday in some of the EU’s Member States–and with the exodus of early Summer vacationists. Anything is possible if it is to increase electoral participation that has been decreasing even as increasing powers have been granted to the European Parliament. 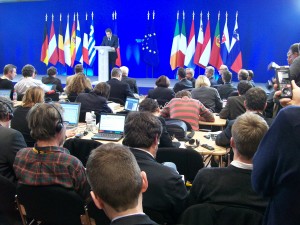 Although the European project seems to fare better when it ‘flies under the radar’, shunning popular engagement, the next European elections will be the testing ground for an experiment in institutional design that hopes to make a ‘dry and boring’ Europe more interesting and appealing to the masses while catalysing a European demos. With the goal of having a European election worthy of its name, national political parties will clearly indicate their affiliation to a European political family (social-democrats, Christian-democrats, liberals, greens, etc.), and so explicitly support a pan-European candidate for the presidency of the European Commission. At last there will be a link between a vote in the European elections and a European leader. For example, it has been known that the current president of the European Parliament, Martin Schultz, wants to run as the Socialist candidate for that office. Therefore, if his candidacy is confirmed, those voting for the PSOE in Spain or for Labour in the UK would know in advance that they are lending support to this German politician as the Socialist candidate for the European Commission.

Somewhere in Europe there must be political consulting firms working on the project of a ‘President for Europe’, a dream of many federalists. Last April I conducted a similar exercise with students attending an MA in Civic Education at Danube University in Krems, near Vienna. I asked them to engage in two practical exercises: 1) to draw the election poster of a pan-European candidate, and 2) to draft the first issue of a pan-European magazine that we tentatively named as ‘Der Spiegel Europe’. The results were telling.

The electoral posters drawn by my Austrian students could be divided into two categories: ‘cosmopolitan’ and ‘cyborg’ candidates.

Among the first category, my students suggested the name of Maria Vassilakou, the city councillor for urban planning and climate protection in Vienna. Her Greek origin and her successful integration into the Austrian political landscape epitomised, for them, the possibility of a union between Southern and Northern Europe. Another name came to the fore: Karel Schwarzenberg, who was at the time the Czech Minister for Foreign Affairs. Schwarzenberg is widely known in Austria (where he lived for 40 years) as he descends from the Habsburgs, the family that ruled a multi-national European empire.

Cyborg candidates all had a bit of Margaret Thatcher. In my reading this is a subliminal longing for the political attributes that Europe lacks: charisma and decision-making ability.

The contents of that first pan-European magazine had a focus on economics, which again reveals another conspicuous feature of the current European Union: its almost exclusive identification with economics (even pro-European Spaniards respond “money” and “euro” when surveys ask them what Europe means for them). My students were unable to find any popular figure in a would-be European star-system. The contents of the magazine was so technical that not even the well-intentioned ‘Eurominati’ that populate Brussels offices and hold Jean Monnet university chairs across the continent would be able to read it without yawning.

This was a very productive seminar, it revealed (to my students and myself) how far we are from a ‘normal’ political Europe. Nevertheless, during the exercise I realised there is indeed a feature that we Europeans seem to share. When I asked them if we should reach the point of crying and getting moved at the sight of the European flag, as Americans do with their Star-Spangled Banner, my students said they had no envy at all of such feelings. “I don’t think it is good nor desirable to feel what Americans feel about their flag”, said one of them, followed by the affirmative nod of his classmates. Which reminded me of philosopher Bernard-Henri Lévy’s  observation when he followed de Tocqueville’s footsteps in America for The Atlantic magazine:

“A thing which impressed me there, at the beginning, was the flood of American flags. Everywhere American flags. On the windows, on the shops, on the jackets, on the bicycles, on the cars. I am coming from a country where you never see a flag. I come from a country where to love the flag, or to feel an emotion in front of the flag, is considered as proof that you are a cuckoo and an idiot. And I arrived in a country where there are flags everywhere. My hypothesis is that it has something to do with the fragility of being a nation in this huge space of fifty states. People come from everywhere. The greatness of America is that being a nation has nothing to do with the evidence of the body. It has nothing to do even with the fact of having common roots in common ground. It has to do with an idea. It has to do with contracts. It is to want to be an American. We are not born American, we become American, and this creates a sort of uncertainness, a sort of fragility. Compensation for that is this extreme exhibition of the flag.”

European elections, like the euro currency itself, are the superimposition of a federal dream over a reality that is, if anything, merely confederal. The nearly ‘direct election’ of the president of the European Commission is the ninth attempt to create a people, ‘the Europeans’. It is also another chance (perhaps one of the last ones) to enliven the EU with that which is so alien to its DNA: the explicit and the popular.

This entry was posted in Europe, Other and tagged Candidates, Demos, Direct election, European Elections 2014, Federalism, President of the European Commission. Bookmark the permalink.
We use cookies on this site to understand how you use our content, and to give you the best browsing experience. To accept cookies, click continue. To find out more about cookies and change your preferences, visit our Cookie Policy.