Posted on September 17, 2013 by Eurocrisis in the Press

By Ania Plomien and Diane Perrons 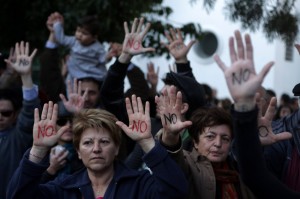 Five years ago the failure of the international financial sector – prompted by the Lehman Brothers bankruptcy in the USA in September 2008, followed by the RBS bail out in the UK and the collapse of the three largest banks in Iceland in October – precipitated an unprecedented economic crisis.  Beginning with the sovereign debt crisis in Greece in April 2009, the Eurozone and other countries across the globe were affected by and implicated in this ‘capitalism’s winter of discontent’[i]. Widespread job losses, home dispossessions, business foreclosures and many other social and economic damages affected a large number of people. But, like many disasters, these crises also had a silver lining – they inspired lively activist, policy and academic debates on the desirability and possibility of moving away from the prevailing neoliberal model of capitalism. Public discourse, especially in the early stages, by and large supported the calls to reign in the global finance recognising that ‘markets are not always wise’ and that  parts of financial services can be ‘socially useless’[ii]. And a gender perspective was visible too, in the UK the Women’s Budget Group proposed a Plan F[iii] , while more broadly (and curiously) women were constructed as redeemers of this man-made wreckage[iv].

Five years on we are told, somewhat cautiously, by the President of the European Commission that although the economic crisis is not yet over, the ‘recovery is within sight’ with Europe being ‘on the right track’ as long as ‘we are not complacent’[v]. In the UK the Chancellor announced, rather more boldly, that the country is ‘turning a corner’ as it is in the ‘early stages of recovery’ and any further progress depends on the resolve ‘to hold to the course we have set’ including ‘our deficit reduction plan’[vi]. Do these optimistic, if careful, assessments of progress reflect the overhaul of the financial institutions? Have the necessary policies to fix the economic problem, its symptoms and its causes, been implemented? And are the (more and less) ambitious demands articulated by many policy-makers, activists, commentators, and society at large part of the solution being so faithfully pursued?

Indeed, both in the EU and in the UK, a number of reforms took place. At the European level €700 billion were made available[vii] for stabilisation measures in a number of struggling national economies, the financial sector was reformed to protect people’s bank deposits, and the countries of the Eurozone and those aspiring to join it are bound by rule-based fiscal policies focused on the reduction of deficit and debt to attain ‘sound’ public finances and ‘modern’ economic policies effectively restraining discretion of democratically elected officials. In the UK the Bank of England[viii] injected £375 billion into the economy, the financial institutions and the regulatory systems have been amended, a few  top bankers faced repercussions for their role in the financial crisis, while the cash bonus culture was only temporarily and partially curbed. These changes in the EU and in the UK, however, are hardly capable of transforming the economy in such a way that the economy serves the society, rather than the reverse.

As we argue elsewhere[ix], the underlying causes of the global economic crisis are complex and deeply rooted in rising economic inequalities associated with the neoliberal model of global development. So, while the era of neoliberalism has been accompanied by economic growth and rising affluence in many countries and regions of the world, the fruits of this growth have not been equally distributed with labour’s share of value added falling, earnings inequalities rising, and the reliance on debt-financing to maintain living standards reaching unsustainable levels. Addressing inequalities should thus be firm on the policy agendas of governments interested in effective and long term resolutions to the crisis. But, austerity-first policies are pursued in the UK and elsewhere in the EU in line with what the President of the EC declared that ‘ultimately, this is about one thing: growth’. The problem here is at least twofold – with austerity policies and the growth objective in and of themselves, and with a partial view of the economy – both being gender-biased.

With respect to the first, in the UK, debates of austerity measures focus on its relation to growth – whether austerity strangles or weakens growth prospects, whether growth would have been possible without the recent easing of fiscal tightening, whether the growth we are now witnessing is the right kind – debt-fuelled, consumption-driven, or investment-based – and whether all sectors of the economy are partaking in the current growth to attain a balanced recovery. The fixation on growth and the perverse promise of ‘fairness’ and ‘ensuring that those with the broadest shoulders bear the largest burden’[x], obscure the view that the current model of growth will not deliver well-being for all, especially if austerity disproportionately hits women as repeatedly shown by the WBG[xi] analyses. Even as jobless growth seems to have been averted, many of the newly created private sector jobs are inferior[xii] to those lost in the public sector undermining the coalition government’s ‘jobs equals prosperity’ formula and, with the continued necessity for the public purse to supplement wages of the low-paid and insecure workers, defeating the ethos of a non-interventionist state or the creation of sufficient and non-debt financed demand.

In relation to the second, heterodox and feminist economic empirical and theoretical analyses of the economic crisis and of macroeconomics in general highlight that ‘sound’ macroeconomic strategies are as much a social and political issue as a technical one. As such, the biases privileging the rich and the powerful through the way that fiscal deficits are currently managed are not inevitable and rethinking macroeconomic policy to promote greater equality by social class, gender and ethnicity and for transforming prevailing gendered social norms is possible. The project of resolving the financial and the economic crises in a sustainable and equitable way depends crucially on addressing the crises in social and political spheres.

[ix] D Perrons  and A Plomien (2013)‘Gender, Inequality and the Crisis: towards more equitable development’, in Karamessini, M. and Rubery, J. Women and Austerity. The Economic Crisis and the Future for Gender Equality. Routledge.  http://www.routledge.com/books/details/9780415815376/

This entry was posted in Europe, Gender, United Kingdom and tagged austerity, ethnicity, fiscal deficits, growth, Inequality, Neoliberalism, social class, women. Bookmark the permalink.
We use cookies on this site to understand how you use our content, and to give you the best browsing experience. To accept cookies, click continue. To find out more about cookies and change your preferences, visit our Cookie Policy.