Posted on February 2, 2015 by Eurocrisis in the Press

For years, conventional wisdom has said that the role of the EU in national elections is rather insignificant. Even European Parliament elections are often regarded as ‘second order’, where voters use the ballot box in order to express their grievances towards governing parties and the way they manage national issues. This lack of a proper debate on EU issues is not too surprising if we take into account how detached European citizens often feel from what goes on in ‘Brussels’. It is for that reason that last Sunday’s elections in Greece, marked by the major role of the EU and the remarkable victory of Syriza, become rather historic. 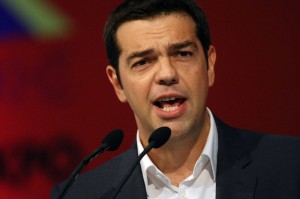 Indeed, Greece is no exception to the rule and historically the EU has not played a massively important role in elections. However, since the beginning of the Eurozone crisis in the Mediterranean country, things have changed a lot. Progressively, more and more Greeks have viewed the EU under a negative light: when the country joined the Eurozone in 2001, 51 per cent of its people had a positive image of the EU, considerably more than the rest of the member states (42 per cent). Since the crisis, the percentage of people who have a positive image of the EU has dramatically dropped: before the 2014 European Parliament elections it reached an all-time low of 16 per cent, which was also the lowest across the EU. In late 2014, the positive image of the EU had gone up to 23 per cent but the majority continued to view the EU negatively, the highest percentage out of the only three member states (the others being Cyprus and Austria) where negative feelings prevailed.

But for all the bleak feelings, the support of EU membership has not seen an equally impressive decrease, and few days before last Sunday’s (25th January) elections more than 80 per cent of Greeks wanted the country to remain part of the Eurozone. Indeed, this is an interesting feature of euroscepticism in Greece, unlike other countries such as, for example, the UK:Greeks remain somehow ‘reluctant Europeans’, firmly in support of their place in the EU but at the same time questioning what the EU looks like at the moment.

Those changes in society have also been reflected in the party scene. Over the crisis years, elections have been fought between two main camps: on the one hand, those parties that promoted themselves as strongly pro-EU and they supported measures that satisfy the conditions of the EU bailout agreements (such as the centre-right New Democracy or the centre-right PASOK) and, on the other side, those who opposed these deals and austerity (such as Syriza or their government coalition-partner Independent Greeks). As such, the EU took centre stage in the parties’ campaign with all parties invariably making references to the EU and the Eurozone crisis.

But this ‘Europeanisation’ of political parties and their debate can be seen most clearly in the case of Syriza and its journey until claiming victory in last Sunday’s elections. As the positive impact of the EU went down, Syriza’s share of votes went the opposite direction: from 5 per cent in the elections just before the crisis, Syriza jumped to 16.79 per cent in 2012, 22.9 in 2014 and finally to 36.34 per cent in last Sunday’s elections. The party’s success based on an anti-austerity/ anti-establishment agenda should indeed be seen as a result of great public frustration with the way Brussels have dealt with the Eurozone crisis. At the earlier stages of the crisis, Syriza advanced a radical rhetoric, with some of its members openly advocating policies that did not conform to a ‘European’ future of the country, such as exit from the Eurozone or return to the national currency of drachma. But on their way to government, Syriza had to take into account those ‘reluctant Europeans’ described above. Gradually, Syriza has tried to promote itself as a more moderate and pro-EU party- albeit with an alternative vision for Europe and with many, different voices on what the future should look like- and does not negotiate the place of the country in the Eurozone.

So, while in many cases –including Greece in the past- policies that are decided at EU level do not impact the elections debate because people grow indifferent about them, the Eurozone crisis is a slightly different story. In this case, people see policies that are decided at the EU level to be of such importance for national politics of many countries, such as Greece, that become the single most salient issue in the national debate. Indeed, what we have seen in the Eurozone crisis and in the latest elections in Greece is not the EU gaining importance as an issue per se. Rather, in a sense, national politics continue to dominate the discussion but this time people view them intrinsically linked to what goes on in Brussels and the bailout agreements.

But for all the obvious impact of the EU on the terms and outcome of the elections debate, the big question now is what sort of government Syriza will lead the day after. And, since Greece has often been seen as the country that could set the tone of an alternative solution to the Eurozone crisis, this is a question crucial for the rest of Europe too. Over the years, Syriza has moved to support Greece’s place in the Eurozone. Indeed, this convergence of the agendas of big parties on the issue of the EU has often been the case throughout Europe. But despite all its transformation that has brought it closer to the EU, Syriza remains a party that evangelises a different, more radical, anti-austerity agenda for Greece and for Europe. The words of Syriza’s leader Alexis Tsipras following the election results do not leave room for misunderstandings: ‘the verdict of the Greek people …annuls… in an indisputable fashion the bailout agreements of austerity and disaster’. The following months will test whether this different Europe can actually exist.

George Kyris is Lecturer in International and European Politics at the University of Birmingham. He is author of ‘The Europeanisation of Contested States: The EU in northern Cyprus’ and his broad research focus is the international role of the EU and conflict resolution and the politics of the Eurozone crisis.