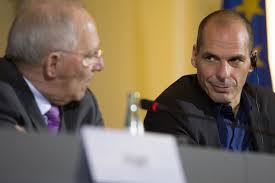 We need to talk about Syriza. But it would be unwise to do so without perspective, or without history. We need perspective in order to gain perspective, thereby allowing us to triangulate rather than simply divide complex issues into neat bundles of meaning. And we need history in order to contextualise rather than distance ourselves from the origins of the events we seek to discuss.

In the meantime, it is imperative that we resist much of the noise that surrounds discussions about the new kid on the European bloc, namely Greece’s newly formed government which was borne out of a peculiar coalition between the self-styled radical left-wing Syriza party and the populist right-wing ANEL (Independent Greeks). What is interesting about much of this “noise” is the eerie silence that has hushed up any coherent explanation of how to make sense of this odd couple, especially in the non-Greek media coverage and public discourse alike. Behind that silence lurks a complex tangle of polarities, dualisms, enclosures and paradoxes that informs both the electoral result per se, as well as the very rationale that brought it forward. This is where history becomes useful.

Emerging out of the shadows of its previous existence as a province of the Ottoman Empire, Greece was born as a nation in the mid-19th century and grew up in various stages of turmoil, beginning with the country’s War of Independence from the Ottomans (1821-1832) and the intermediate civil wars of 1823- 1825 (Filikoi vs. Kotzabasides between 1823-4 and Ydraioi vs. Moraites between 1824-5), succeeded by a disastrous sequence of events that include World War I, the Balkan Wars, the Greco-Turkish War of 1919-1922, the turbulent inter-war period of 1923-1940, the Italian and German Occupation during World War II, the Greek civil war of 1946-1949, and the military junta of 1967-1974.

The main casualty of this successive wave of injuries to the country’s national sovereignty and the collective self-understanding of its people has been the conspicuous absence of a period of healing, which could bequeath its citizens a political education that could move beyond deep-seated suspicion, animosity and hatred. What succeeded this forty-one year period of peace instead, known in Greek as Metapolitefsi, was further entrenchment and divisions that are still with us today, hiding in the background and subconsciously informing cultural, political and voting behaviour.

The uncomfortable inheritance of such divides eventually resulted in the internalisation of such disputes as neuroses, only to become manias that afflict both the electorate and the Greek political elites to this very day. And while Syriza’s rise to power had the hallmarks of previous voting contests in Greece, the mentality the elections reproduced has added an extra layer to the patina of time. This is where and why we need perspective.

In tracing the origins of political dispute in Greece however, we discover something more than a conciliatory deficit. We come face to face with a pronounced hostility towards rational argument and critique. Without it we can only speak from encamped positions which forebode, if not forbid, independent judgement while also sabotaging our ability to listen, let alone see, clearly.

In the context of Syriza’s rise to power, all this translates to turning a blind eye to the party’s insincere and deceitful comportment towards itself, its electorate and its European partners alike. This is where we need perspective, otherwise, it would be uncomfortable to admit that Syriza’s victory owes its success to playing to, if not with, the electorate’s weaknesses, made up of insecurities, phobias, anger and despair: all of which are legitimate emotions, but unreliable raw materials for politics.

It is embarrassing to accept that we were seduced by Syriza’s flamboyant barnstorming populism via an anti-austerity rhetoric that pitted “poor Greeks” against its “uncompromising creditors” with memorable slogans such as “Go back, Ms. Merkel”, “we vote and they leave the next day” and “we will beat the drum and the markets will dance”, not to mention the widely reported ‘tearing up of the EU austerity deal’.

While such sloganeering may appeal to the masses, it also degrades/infantilises people and offends everyone’s political reasoning and imagination by lazily reproducing, albeit in reverse, the bigoted narrative of feckless and profligate “Club Med” countries vs. their thrifty, hard-working “ski lodge” counterparts: a repeat performance of which we have witnessed recently in the press, on TV, and online in various shades of kitsch (here and here). 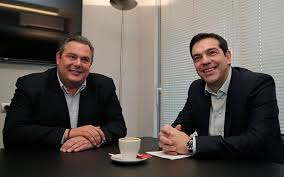 It is harder still to admit that such posturing left no room for a coalition with any other party than a tawdrily nationalistic, anti-European, openly homophobic, anti-Semitic, nearly far-rightist group which is prone to conspiracy theories, aptly representing what Richard Hofstadter called the “paranoid style” in (American) politics. Syriza and ANEL may be ideologically divided, but they are united by a mutual hatred for Greece’s bailout programme thereby refusing to ally with the Communist Party (KKE), social democratic left DIMAR, centre-left KIDISO, centrist Potami, socialist PASOK, conservative New Democracy, excluding only far-right LAOS, and neo-Nazi Golden Dawn as impossible partners.

What is even harder to stomach, however, is the realisation that we’ve been played in a game of doublespeak that Syriza tried both at home and abroad. After winning state power, Syriza didn’t just tuck backwards into a somersault (kolotoumba in Greek), but also got stuck in a cul-de-sac when it had to find a way to harmonise its pre-electoral largesse with the pressures of realpolitik. The chosen strategy, acutely Machiavellian both in its conception and execution, was to deal with the country’s fate (fortuna) by exercising shrewd diplomacy (virtù) in the form of language games. Instead of having to betray its fan base at home or alienate its European partners abroad, Syriza’s Dickensian “circumlocution office” introduced a series of euphemisms that were ushered in to lessen the blow of the difficult measures it had to draw up, for the economy to remain afloat until the next bailout loan.

Austerity quickly became “ascetic life”, and was described, in Churchillian terms, as a path paved with “blood, sweat and dignity” to be Stoically endured by the Greek populace as an alternative to belt-tightening austerity, thereby portraying poverty as dignified rather than a different form of the same humiliation that austerity-ridden Greeks have endured since 2010. The much hated memorandum was renamed a “contract” and a “programme for recovery and growth”, while the equally despised troika (the EU Commission, the ECB and the IMF) metamorphosed into “the institutions formerly known as the troika”.

In the context of the Eurogroup negotiations this meant adopting an obstinately uncooperative attitude to start with, which satisfied the public mood at home by inspiring truly moving pro-government rallies, but infuriated the country’s eighteen interlocutors with the arrogance of its message: this being in essence to treat the national electoral result like a papal bull which decrees the rest of the Eurozone must succumb to the will of the Greeks, as if the other eighteen finance ministers did not democratically represent the will of their own people. This farcical hard-line stance was quickly replaced with “creative ambiguity” tactics that would have made Henry Kissinger proud, and the fanciful mythology of a “united Southern European front” became even harder to sustain following the reaction of Cyprus, Spain, Portugal and Ireland who “betrayed” the anti-austerity axis that never was.

When Greece quickly lost its swagger following the extension of a four-month bailout, it continued to brandish this brand new second hand agreement triumphantly, despite reactions from within the party’s so called “Left Platform”, and amid criticism from towering figures of the Greek Left such as resistance fighter Manolis Glezos and anti-junta composer Mikis Theodorakis, while also inaugurating the first anti-government demonstration since Syriza’s rise to power.

The outcome of this degradation ceremony however, does not simply reveal the excess of promises/expectations over possibilities/opportunities, but beckons us to tussle with a perennial problem in Greek politics, this being none other than the triumph of rhetorical inflation over analytical deflation and critical reflection. In the context of Syriza’s first month in government, this void was expressed by confusing hope with hype in a country that has never been short of promises that hardly ever materialise into tangible benefits.

What now for Greece?

The answer is as simple as it is complex, and requires “pessoptimism” à la Gramsci to turn Greece’s recent “degradation ceremony” into a progressive “graduation ceremony“ by setting learning objectives that will not cultivate further alarmism or encourage politics of acclamation and demagogy, but aim instead at the exercise of judgement (krisis), wisdom (phronesis) and soundness of mind (sophrosyne). In the short-term, it is of course important to raise the necessary revenue to plug the funding gap by tackling corruption and tax evasion head-on, through increasing transparency, imposing swift and severe penalties, while also boosting the country’s productive base as a top priority.

In the long-term however, this means putting social justice first, provided that this is what the electorate genuinely wants. But this cannot be done without making a sincere effort to define our identity and belonging vis-à-vis Europe on our own, rather than fatalistically rely on tired narratives of European demise or German dominion which only exacerbate the current climate of fission and acrimony that rips the entire Union asunder.

What is needed instead is a clear focus on strong levels of integration across the EU combined with tighter national regimes of regulation at home, aimed at discarding divisive claims about “unrelenting creditors” and “idle debtors” by honouring our mutual commitments as members of the same political community. This involves giving up ideological habits and replacing anachronistic archetypes of political identity with a process of what Hannah Arendt called “natality”: the formation of a novel political identity made up in the context of where we find ourselves now, instead of rummaging through modernity’s trash-can in search of political orientation.

Last but not least, none of these goals are possible without revisiting how we vote and how we think. What is sorely missing is the ability to vote and think politically in a non- self-referential or emotive manner – which may satisfy ideological fantasies, but does little justice to determining options for how politics ought to be done and what policies can/will be agreed upon or publicly ratified. To do so, we must resist whatever comfort selfishness, fanaticism, anger, fear and despair might afford, in favour of a duty of civility, a willingness to listen carefully to what our elected representatives actually do, and fair-mindedness in making decisions in front of the ballot box.

Anything else is destined to prove Abraham Lincoln right: ‘a house divided against itself cannot stand’. To avoid further bitterness and ill-feeling we therefore ought to appeal not to our vulnerabilities but to the ‘better angels’ of our nature and political culture. No crisis can pass unless such agitations cease, and no such realisation can dawn on us without deciding where we are, whither we are tending, what to do and how to do it. The rest is just history and mere perspective.

This article first appeared on the LSE blog EUROPP

Dr Lambros Fatsis teaches Sociology at the University of Sussex. Since 2012 he has been commenting on the Eurozone crisis from the ‘Sociologists of Crisis’ column for The Sociological Imagination online magazine.

The winds are changing: a new left populism for Europe

This entry was posted in Greece and tagged austerity, Greek politics, Independent Greeks, left wing politics, populism, SYRIZA. Bookmark the permalink.
We use cookies on this site to understand how you use our content, and to give you the best browsing experience. To accept cookies, click continue. To find out more about cookies and change your preferences, visit our Cookie Policy.