It is easy to see how almost all the European Union’s Member States, as well as other western advanced economies, are facing greater social inequalities, the spread of precarious/poorly-paid job conditions, greater tax burdens on households/SMEs, stagnation or slow economic growth together with high unemployment rates and cuts in core government functions. All these factors are leading to an impoverishment of the middle classes. From this picture arises, at least, one question: Is this situation a harsh consequence of a global economic crisis, or, on the contrary, the crisis is a response to a particular type of socio-economic paradigm—commonly known as “the system”? This article, divided in two parts, aims to answer that question: part 1, concentrates on negative socio-economic effects of crony capitalism, and part 2, deals with the relationship between crony capitalism and the global neoliberalism paradigm now reigning in most countries. 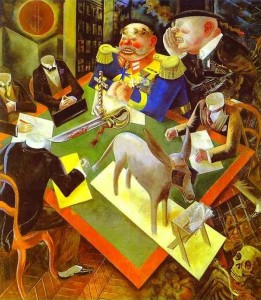 Crony capitalism, which can be defined as a set of economic practices and modes of organisation whereby success depends of the close relationships, often even personal, between business people and political figures, can be identified as the core of a flawed socio-economic system, mainly based on the characteristics that will be listed below, having an overall negative impact on economic growth as well as wealth distribution, and ultimately generating a high level of systemic poverty.

Strong links between politics and wealth — rent-seeking. In essence, business people use political connections to achieve wealth. Rent-seeking is a source of corrupt practice that distorts free market — there is no creation of wealth nor entrepreneurial spirit is necessary, as entrepreneurs/enterprises obtain financial gains, without any risk, from political lobbying.

Financial speculations — e.g. commodities and property prices are conveniently inflated. Lack of competitiveness — monopolies and oligopolies. The current economic globalisation is plagued of enormous asymmetries—multinational companies have an oligopolistic power in most markets—. Poor regulations (or appropriated legal vacuums) allow governments to grant profitable contracts to their cronies.

Privatisation policies — well-placed people/entrepreneurs/firms gain the property on public assets (sometimes at bargain prices) stifling fair competition. These privatisations worsen the efficiency of the service, contracts are not awarded to the best-qualified applicants, but to those who are closer to political power—also making it more expensive as bribes and increase the cost and ultimately the price of a service. As it is well known, the private sector has the goal of profit maximization and cost reduction. However, such profit-driven approach should not be applied to the management of the key functions of the state, because doing so only favours access to public services from people with sufficient economic capacity to afford them, leaving all others behind.

Legal and illegal financing of political parties — e.g. multinational companies and wealthy individuals influence political parties for the protection of their own interests. Sometimes capital flights are not the result of disorganized states, but a tactic to seek advantageous conditions for investments, large profits and special tax privileges — e.g. tax havens.

Crony capitalism is not just unfair, but it also has a negative socio-economic impact:

Domestic competition is repressed, economic efficiency is reduced due to misallocation of resources and lack of competitiveness generated by favouritism of insiders (lobbyists, those with access to privileged information, enterprises/entrepreneurs arising from political clientelism and so forth) over outsiders (unfairly excluded economic operators/consumers/entrepreneurs/enterprises). Crony capitalism is not a competitive form of capitalism.

Lack of effective measures to encourage productive sectors: innovative firms are stifled by better-connected players — in my view, bubble-prone economies appear to be associated with cronyism.

Discriminatory and unfair tax system: taxes that benefit high incomes and big business at the expense of others, which in turn encourage tax evasion and money laundering. Government revenues are reduced and as a consequence greater social inequalities on the one hand, cuts in core government functions on the other.

Long-term growth—a model of growth that is not based on competitiveness but export-oriented and debt-driven—is concentrated in sectors prone to bubbles and as a result a weak economy ensues, characterized by continuous ups and downs and high level of unemployment.

New class of tycoons — post Soviet countries like the Ukraine and Russia or China (with a Communist government and a supposedly liberalized economy) have a high level of cronyism. Billionaires emerging in recent years from bureaucratic positions are an example of it.

There are industries more prone to graft, as for example:

These industries are vulnerable to monopolies or have a high state involvement. Therefore, if public companies are handed — by the privatisation process — to entrepreneurs (enterprises or tycoons) close to political power on favourable terms (again: cronyism capitalism), the public suffers from the resulting higher prices and lower quality of services.

Billionaires in crony sectors weigh heavily in post-Soviet countries and Asian countries. It is easy to see that governments, through economic and structural reforms, have handed state-owned companies over to people close to political power on favourable terms. There we see the origins of new billionaires, in most cases, senior officials (relatives and/or friends) of the Communism apparatuses. South America presents a similar situation.

Obviously, these big corporations in crony sectors controlled and managed by new tycoons, entrepreneurs who have become billionaires as a result of their close relationship with political power rather than by their own entrepreneurial skills, weigh heavily on global stock markets, putting pressure on market indices (national and international) and influencing the decisions of governments.

In China, at the beginning of the economic reform era in the late 1970s, urban residents had permanent jobs for life, free housing and health care. By the mid-1990s, unemployment had grown considerably — because of factory closures and lay-offs—, and most of these people were forced into poverty, unemployment benefits were granted rarely and only covered the basic survival needs.

In more recent years however it cannot be denied that China has gone from being the world’s factory to a major consumer, both in domestic and international markets. In the past fifteen years, the performance of Chinese economy has been shaped by a policy of high labour productivity combined with higher wages. This fact led to the creation of powerful middle classes, increased people’s purchasing power and strengthened domestic business structures; as a result, the social differences have been reduced, as well as the growing middle class is making China more competitive. The Chinese middle class is around half a billion people with a higher buying power per household than that of the Eurozone’s middle class. Obviously, there are still large regional and socioeconomic disparities. An important strong point would reside in the fact that the growth of modern cities (it must be noted that China estimates homes built, irrespective of whether these were sold, to calculate its GDP, giving rise to ghost towns and exposure to the danger of a real-estate bubbles as this mechanism constitutes a transfer, rather than a creation, of wealth) was capable of including more people within the middle class, as well as encourage a model based on clean, renewable energies, but it seems that liberal economic measures always bring with them a great deal of crony  capitalism — or, at least maintain, or even increase, the negative effects of cronyism. Therefore, free competition and socio-economic success based on merit are pipe dreams.

On a global level, mergers and acquisitions of multinational corporations are continually increasing, mainly in key sectors of the economy, such as energy, construction, communications, health and pharmaceutical, transportation (industries more prone to rent-seeking). As a result, there is a global power concentrated in the hands of few companies, lack of competitiveness and transparency, tax engineering. This is precisely the opposite of what the globalisation advocates intended: the so called “free market values”. This concentration spreads much wider and deeper global socio-economic crisis, a domino effect, and in the case of stock values it benefits large investors at the expense of smaller ones; furthermore, it increases volatility of the world’s leading stock markets, as global financial systems are more prone to crashes and bubbles. Paradoxically, those who declare themselves as “liberals” and strong supporters of free market are anxious to forge alliances with such classes [new tycoons, lobbyists, politicians…] when they intend to discuss business in such countries.

[Part II will be posted in the next few days]

This entry was posted in Other and tagged clientelism, crony capitalism, cronyism, globalisation, Neoliberalism. Bookmark the permalink.

2 Responses to Crony Capitalism and Neoliberal Paradigm (Part I)