The European Periphery and the Eurozone Crisis 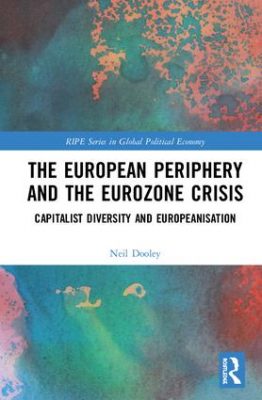 Nearly ten years on from the first Greek bailout, the countries of the eurozone periphery have exhibited markedly divergent recoveries. A popular narrative attributes the contrasting recoveries of Greece and Ireland to their divergent enthusiasm for following EU rules on structural reforms and austerity. In contrast, my new book, The European Periphery and the Eurozone Crisis, shows that ‘following the rules’ doesn’t always ensure good economic health, but is linked to the causes of the eurozone crisis in the first place.

Why the ‘official narrative’ is flawed

The eurozone crisis has often been told as a story of excessive spending, runaway borrowing, weak competitiveness, and the political unwillingness to make painful but necessary reforms. This ‘official narrative’, developed by, among others, Greece’s lenders has underpinned a policy response of austerity and ‘structural reforms’. As Greece exited its bailout in August 2018, this story resurfaced as a tale of assisted redemption. The European Commission tweeted that Greece has embarked on a “new chapter” which is:

“the result of both national reforms and support from EU partners. The sacrifices and efforts of the Greek people in undertaking these reforms have delivered real, tangible results”.

“It is good that #Greeceexits its bailout. Nevertheless we don’t have to forget that due to the SYRIZA government this didn’t happen much earlier and much cheaper for the Greek people”.

As this story goes, the country got into trouble by flouting the rules of the game. The EU helped Greece recover by assisting it in (eventually) getting with the programme. Ireland, on the other hand, has been held up as the ‘poster child’ of austerity, praised by former Commission President Barroso as evidence that “with strong determination and support from partner countries we can and will emerge stronger from this deep crisis”.

There are a few problems with this story. Commitment to ‘following’ EU rules has been no guarantee of recovery from the eurozone crisis. Even the IMF have admitted, more than once, that they failed to recognise the damage austerity would do to Greece. Ireland’s recovery, as Samuel Brazys and Aidan Regan show, has been foreign direct investment-led and not driven by austerity. However, following certain EU rules did play a role in causing the crisis in both Greece and Ireland in the first place.

European financial integration was a cause of the eurozone crisis

In my book, I show how from the late 1980s onwards, the EU encouraged member states to reform their banking and financial sectors in preparation for the completion of the European Single Market and the euro currency area. A Single European Market in Banking was expected to increase competition, economies of scale, and make it possible for businesses and consumers to avail of banking services across the entire EU market. These EU-led reforms led to dramatic transformations of the relatively under-developed banking sectors in the European periphery. In the cases of both Greece and Ireland, it rapidly transformed stagnant economies into some of the fastest growing in the EU. However, such record growth rested on very fragile foundations.

Prior to its adaptation to European financial integration, the Greek and Irish banking sectors were tightly controlled and strictly regulated. Banks in Greece had limits on how much they could lend to consumers and the construction sector, and had limits on lending to a range of other so-called ‘non-productive’ sectors. As Blánaid Clarke and Niamh Hardiman note, the Irish banking system prior to the Single Market was characterised by feeble lending and competition.

To join the euro and the Single Market, the eurozone periphery was expected to liberalise and deregulate its banking sector. These reforms led to a periods of above average economic growth in both Ireland and Greece during the early 2000s. As bank loans for consumption and mortgages skyrocketed, so too did economic growth. As I show in my book, between 2004-2008 private consumption accounting for almost three quarters of Greece’s GDP growth, and much of this was fuelled by bank credit. Low interest-rates and intense competition between new-entrant foreign-banks and domestic Irish banks drove an unprecedented property bubble in Ireland at about the same time.

This new type of economic growth had several damaging impacts. By 2008 Greece and Ireland had transformed into economies that were almost entirely reliant on credit, domestic demand, and not much else. Once the bubble burst and the Global Financial Crash hit, credit which was previously easily available dried up.

While Ireland’s fiscal problems were chiefly domestic in origin, European financial integration and the euro also made a bad situation worse for Greece’s public finances. The euro made it cheaper and easier for Greece to push its debt servicing burden to the future. The recession, current account deficit, and the externalisation of Greek debt were all big parts of why Greece appeared so risky to markets in 2009.

Greece’s well-known fiscal difficulties played an undeniable role in its crisis. Successive Irish governments certainly encouraged the bubble when they should have reigned it in. However, this has never been the whole story. Playing by the rules of EU financial integration helped create brand new vulnerabilities for the Greek and Irish economies in the years before the crisis hit. Adapting to a one-size-fits-all project of European financial integration helped catalyse new and precarious forms of debt-led growth in each country. As my book argues, far from their failure to do so, it has been, in part, the European periphery’s attempt to follow certain EU rules that explains its current difficulties.

Neil Dooley is lecturer in politics at the University of Sussex and author of ‘The European Periphery and the Eurozone Crisis: Capitalist Diversity and Europeanisation’. His academic profile is here.

A Polarized yet Hollow Debate: The Journalistic Coverage of the Greek Memoranda

This entry was posted in Euro, Europe, Greece, Ireland and tagged Bailout, debt, Eurozone crisis, Greece, Ireland. Bookmark the permalink.
We use cookies on this site to understand how you use our content, and to give you the best browsing experience. To accept cookies, click continue. To find out more about cookies and change your preferences, visit our Cookie Policy.