Inspiring the fight? Protests and Voter Defections in Electoral Autocracies

As protests unfold in electoral autocracies – regimes that combine authoritarian practices with multiparty elections – voters who previously supported the ruling regime are expected to shift and back the opposition. However, by looking at the case of Russia, Katerina Tertytchnaya discusses how anti-regime protests may, paradoxically, contribute to explain the resilience of autocracies. When opposition parties and activists fail to convince their citizens that political change is likely, protests may generate political disengagement among the masses which, in turn, helps authoritarian regimes to remain in place. 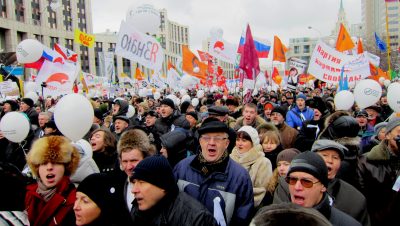 Between December 2011 and May 2012, and amid accusations of electoral fraud in the 2011 parliamentary election, a series of demonstrations, the largest since the collapse of the Soviet Union, took place across Russia. During this time, then Prime Minister Vladimir Putin, standing as presidential candidate in the March 2012 election, was allegedly ‘angry, nervous and frightened’. Drawing parallels with events in the Arab Spring that brought down rulers in the Middle East and North Africa, observers and journalists around the world described the protests as Russia’s ‘white, or snow revolution’.  After all, this was the first time in many years that parliamentary and on-parliamentary oppositions united together in the streets. Initial optimism, however, did not last, as the leadership of parliamentary parties – such as that of the KPRF and Just Russia – as well as the protesters, left the streets. In the spring months of 2012 Vladimir Putin also saw his approval ratings recover. Russia’s ‘snow revolution’ melted quickly with the spring.

Making sense of protesters’ ability to win the support of public opinion and sustain momentum is a question not only of interest to journalists. A large literature in political science expects that as protests unfold in electoral autocracies – regimes that combine authoritarian practices with multiparty elections such as contemporary Russia – voters who supported the ruling regime in the past will withdraw support and shift to supporting its opponents. Protests after all, provide voters a rare opportunity to observe opposition parties and activists in action, to learn about their demands, and decide whether they support them or not. Such opportunities are very rare. Using preventive repression,as well as propaganda and censorship autocrats can prevent opposition activists from taking to the streets and avert support for the demands of the opposition from growing. Yet, to date, existing studies have provided little empirical evidence on how unfolding protests affect voter defections in electoral autocracies. Relatedly, there have been only a few empirical tests of the hypothesis that voters who withdraw support from the ruling regime, specifically as opposition protests unfold, will also shift to supporting its opponents. Detailed datasets on how opinions shift in response to unfolding protest events, do not come easily in many illiberal regimes.

In a recent work, drawing on evidence from Russia’s 2011-2012 protests, I examined how voters who supported Russia’s ruling regime in the past, responded to anti-regime mobilization. The empirical analysis combined detailed data on protest events from the Lankina Protest-Event Dataset and evidence from the panel component of the Russian Election Study surveys – surveys of the same Russians interviewed before and after the protests. Results revealed differentiation in defections. Findings suggest that while opposition protests dampened support for the ruling regime, making people who voted for the ruling regime candidate in the past less likely to vote in 2012, they did not necessarily translate into greater support for the regime’s challengers – the opposition parties and activists who organised the protests and took to the streets to condemn malpractices. Two additional sets of findings stood out. First, anti-regime protests influenced respondents’ assessments of electoral fraud, which were in turn associated with both disengagement from politics and defections to the opposition. Second, disappointment with the prospect of political change in Russia, little mitigated by protests, helped explain differentiation in defections. Respondents who felt that street protests could make a difference to the situation in the country were more likely to switch to supporting the opposition than they were to remain loyal to the ruling regime.

These findings highlight the importance of considering how, in addition to – or instead of – generating support for the opposition, anti-regime protests in electoral autocracies may also lead regime supporters to disengage. When voters conclude that political change is unlikely, the opposition is divided, or that participation in elections is futile, disengagement could trump defections to the opposition. In contexts where participation does not provide genuine input into the political process, disengagement could of course serve as a meaningful form of dissent. Yet, withdrawal from politics may also be seen as less damaging for the ruling regime than mass defections to the opposition. When in response to events that reveal government malpractices a large share of the population – including the bulk of regime supporters – disengages from politics, the likelihood of political change also declines. As existing research shows, citizen disengagement from politics often contributes to authoritarian resilience in settings beyond Russia.  In Mexico, for example, abstention from country-wide elections enabled the PRI to win elections and maintain its dominant position for decades. In Zimbabwe, the deliberate disengagement of educated voters has also been linked to government stability.

Implications also follow for the literature on the legacies of (attempted) revolutions. Voter coordination against illiberal incumbents – just like voter coordination against poorly performing governments that come to power after democratization, or after an uprising – will be more difficult to achieve when opposition parties and activists fail to convince the masses that they are able to credibly challenge the ruling regime, or to offer a better alternative. And, as previous experimental studies have highlighted, providing voters information about government abuses and malpractices is important, but not sufficient in bolstering support for the regime’s challenges – in both democracies and electoral autocracies alike. More broadly, as we try to better understand the underpinnings of authoritarian instability and the legacies of (failed) revolutions past, present and future, we need to pay greater attention to the lessons bystanders learn as protesters occupy the streets, and when they leave them.

Katerina Tertytchnaya is a Lecturer (Assistant Professor) in Comparative Politics at the Department of Political Science, UCL. Her book project draws on evidence from contemporary Russia to study how illiberal regimes manage public opinion when performance is poor.