Ideology and Polarization in times of Coronavirus

By Javier Padilla and Belén Hípola 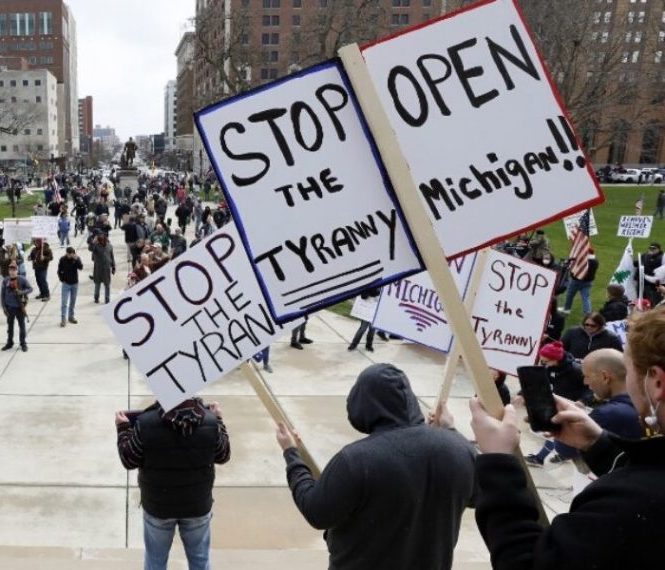 The coronavirus crisis has reinforced some of the tendencies that were already taking place for some time. In the United States, before the demonstrations initiated by George Floyd’s death began, Donald Trump alternated between public appearances calling for lockdown and appeals to ‘liberate’ the democrat states from the ‘oppressing’ measures their governors would have been taking. His erratic management led to conflicts with several governors, among them some republicans. However, the population’s perception of Trump’s management of the health crisis has been determined by their mentality prior to the pandemic: Most Republicans approve of it while Democrats almost unanimously consider it a failure. This phenomenon, called affective polarization by Iyengar y Westwood, can affect technical as well as personal issues.  In the recent years, the number of Americans who declare that they would not want their children to get married with someone of the opposing party has increased. As Rogowski and Sutherland have shown, affective polarization is conditioned by ideology: the closer the person gets to the extremes, the greater the contempt for the opponent.

The high level of affective polarization in the United States has consequences in terms of public health.  Utilizing Google’s mobility reports, Lipsitz and Pop-Eleches have shown  that in democrat counties mobility has reduced more than in republican counties, even as COVID-19 was spreading fast. These authors point out that one of the consequences of affective polarization is that part of the republican voters, encouraged by their political elite, do not trust scientific authorities. This situation, that is partially explained by the skepticism of the republican voters in taking measures against climate change, is influencing their behavior. Other studies have shown that the factor that best explains citizen’s behavior during the first week of the pandemic was their political preferences. In words of Tedros Adhanom Ghebreyesus, the director of the World Health Organization, the conclusion is clear: “If you do not want many more body bags, then you refrain from politicizing it.”

In Europe, the levels of affective polarization regarding the management of the coronavirus crisis vary among countries. In some respects, Spain is similar to the United States.  According to Torcal, already before the pandemic the levels of affective polarization in Spain were considerably high.  As Cornago has shown, the way in which the management of the crisis is evaluated depends on partisanship. Moreover, this is heightened by voters’ ideology. According to the April data from the Centro de Investigaciones Sociológicas (CIS), Spaniards evaluate the Covid-2019 crisis management differently depending on their position in the ideological scale.

The ideological position that we perceive in the parties is marked by our own position. As citizens become more radical, they perceive parties differently: the more extreme, the greater the degree of binary logic. For example, respondents who place themselves on the extreme left in the CIS survey hardly differentiate between Vox, Ciudadanos and the PP: for them they all are on the extreme right. The same, conversely, happens with those who are on the opposite side. More worrying is that this pattern of perception, although more nuanced, is reproduced among those with more moderate positions. According to the CIS, neither Vox nor Podemos voters are as extreme as others perceive them to be: It is as if we like the extreme to always be the others. There is no doubt that the political elites have encouraged this division by electoral calculations: the allusions to the “trifachito” and the “coup left” before the pandemic still resonate.

In Figure 1, with CIS data from March 2020, we can see how voters change the perception of parties based on their position on the ideological axis. More radical voters tend to view parties that are not on their ideological side as more extreme. In other analyses, we  controlled for the chosen party, and the effect of extremism remains. 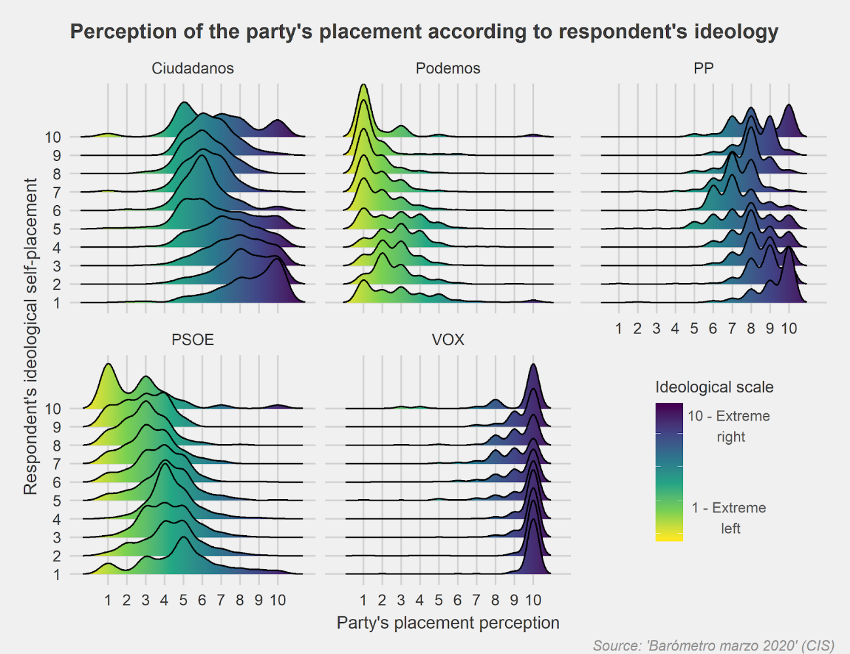 On the other hand, the ideology of the respondent affects how the management of the pandemic has been perceived. The April special survey (CIS) included several questions about the policies carried out to combat COVID-19 in Spain. Figures 2 and 3 show how respondents answer according to their self-positioning on the ideological scale. When asked about the need for the “measures that have been taken in Spain”, most believe that they are necessary or very necessary, with almost no differences depending on the ideology of the respondents (Figure 2). This indicates that the consensus on the need for the measures that have been taken is more or less transversal in Spain.

However, as soon as any reference is made to the measures the government has taken, the responses change substantially depending on respondents’ ideology. To the question about whether “the Government’s policy to fight against COVID-19 as a whole” deserves the trust of the respondent, the answers are divided according to ideology: 70% of those who place themselves in 1 (furthest to the Left) find that the Government’s policies are very trustworthy or trustworthy, while only 19% of those in 10 (furthest to the Right) believe the same (Figure 3). The fact that a large part of the right-wing respondents does not trust measures they consider necessary, as well as the division between the Government’s evaluation by the two ideological blocks, suggests that affective polarization is high in Spain. Furthermore, along the lines of Rogowski and Sutherland, affective polarization seems to increase with ideological extremism. 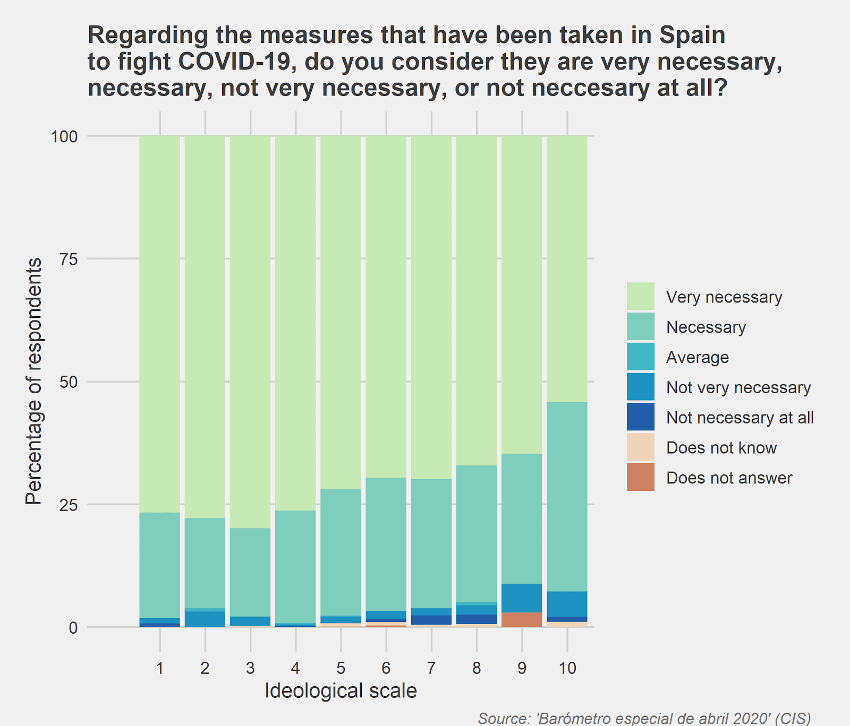 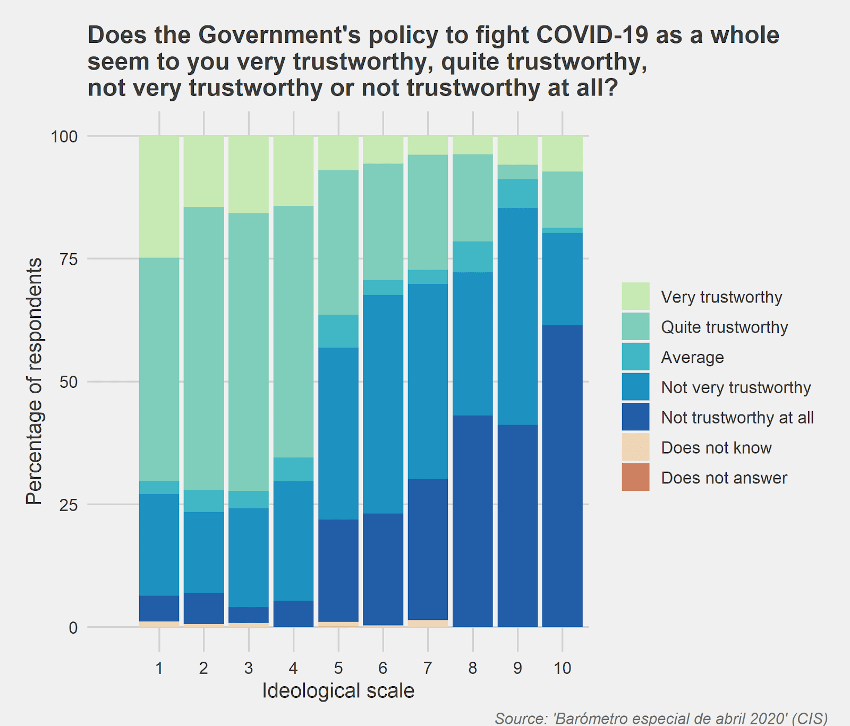 The most interesting question, and for which many of us would have an instinctive answer, is whether these levels of affective polarization have affected the management of the health crisis. Even in the absence of more systematic studies, we have enough anecdotal evidence that the political parties have politicized the pandemic: we have seen tensions between the central government and the autonomous communities due to extra-sanitary issues; casseroles encouraged by different political groups; demonstrations supported for partisan reasons; unfair criticism of the adversary. However, we do not yet have an analysis to determine whether there has been a partisan or ideological gap in the behavior of Spaniards during lockdown. Despite the resemblance to the United States, there was a fundamental difference in Spain before the pandemic: scientific issues such as climate change were not as politicized. According to the CIS survey from January, an overwhelming majority of Spaniards, regardless of their ideology and political preference, agreed with the existence of climate change. The difference between left and right voters on this issue is less than in other European countries, despite the fact that Vox voters are somewhat more skeptical.

All this leads us to two hypotheses, one optimistic and the other pessimistic. The optimistic is that the consensus around scientific issues would have made it easier for Spaniards, regardless of their ideology, to follow the recommendations of the health authorities and consider lockdown measures necessary. The pessimistic is that this consensus could be disappearing due to the intensity of the polarization episodes. The actions of the majority of Spain’s political elites during the Covid-19 crisis suggests that this country is becoming more like the United States.

This entry was posted in Spain, US and tagged Climate Change, coronavirus, Covid-19, Ideology, Polarization, Spain, US. Bookmark the permalink.
We use cookies on this site to understand how you use our content, and to give you the best browsing experience. To accept cookies, click continue. To find out more about cookies and change your preferences, visit our Cookie Policy.