In the current context media attention across Europe has been diverted away from the enlargement agenda; yet, on the verge of Croatia’s accession into the EU this July, the fate of other Balkan countries remains unclear. As the countries continue to undertake economic and political reform, it is evident that EU has been favouring an ‘à la carte’ approach towards these nations. While Serbia, Macedonia and Montenegro are candidate members, Albania, Kosovo and Bosnia and Herzegovina remain only potential candidates. What is clear, however, is that those countries will not be able to join the EU unless they settle their inter-state issues. Such is the case with Kosovo and Serbia. 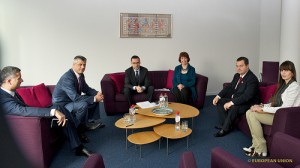 The technical dialogue among Kosovo and Serbia, for the purpose of normalizing neighbour relations among the two countries, is one of the preconditions for strengthening their relations with the EU. If successful, Serbia would get a starting date for its accession negotiations, while Kosovo would start negotiations on signing the Stabilization and Association Agreement (SAA) which so far has not been possible, among other things, for the lack of recognition by five EU member states, namely Spain, Romania, Slovakia, Greece and Cyprus. While it is not believed that recognition by all EU MS will follow any time soon, good relations with Serbia might make it more likely.

The dialogue began in March 2011 when representatives of Prishtina and Belgrade sat down in Brussels under the facilitation of Robert Cooper, Catherine Ashton’s counsellor, to talk about several issues concerning the two countries. Since then, eight rounds of negotiations have been held in total with parties agreeing on several issues related to return of civil registries and cadastre records, freedom of movements of persons and cars, mutual recognition of diplomas, custom stamps, the integrated management of border crossings between Kosovo and Serbia, and Kosovo’s regional representation. In October 2012, Prime Ministers of both countries met for the first time for the purpose of driving the dialogue further under EU facilitation. This dialogue is still on-going.

The eighth round of negotiations focusing on the Northern part of Kosovo that took place on April 2, under the facilitation of Katharine Ashton, resulted in rejection from the Serb side. Kosovo officials have agreed to set up an association of municipalities of Serb majority but without granting it executive powers. Serbian officials, on the other hand, have requested that the association have control particularly over police and the judiciary. While both parties have expressed their willingness to continue the dialogue, Katherine Ashton, upon the ending of this round of talks declared that ‘the gap between the two sides is very narrow, but deep’. Today, the two sides are to meet again with the aim of reaching an agreement before Lady Ashton releases a statement that will determine whether Serbia is to start accession negotiations any soon.

While the implementation of the agreements that have already been reached is still lacking, the biggest risk is that if Serbia does not agree to the deal, their entire implementation would be put into question. To this date, Serbia continues to maintain its parallel security and judicial structures in Northern Kosovo, which leave little room for Kosovo state structures to function in that part. Serbia might agree to the deal and get a date for starting accession talks with the EU but, once it agrees and does not implement the agreement there is little the EU can do to refrain Serbia from joining the EU. While it is not part of the negotiations, recognition from Serbia could make it likely for other countries to recognize Kosovo, and would allow both countries to move further into the integration process. The EU must not only make sure that Serbia recognizes Kosovo but also that it doesn’t hinder Kosovo’s accession into the EU taking into account that enlargement within the EU is consensus based. If not, problems will continue to hinder the relations among the two countries.

Shqipe Mjekiqi is currently a PhD candidate at Trinity College Dublin and has previously worked as an Adviser on European Integration to the former President of Kosovo (2006-2010).

This entry was posted in Kosovo, Serbia and tagged Balkans, Enlargement, recognition, Stabilization and Association Agreement. Bookmark the permalink.
We use cookies on this site to understand how you use our content, and to give you the best browsing experience. To accept cookies, click continue. To find out more about cookies and change your preferences, visit our Cookie Policy.