Do We Want to Solve the Eurocrisis? Let’s Look South! 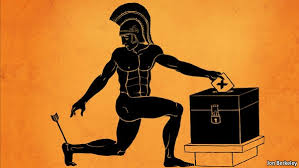 Europe’s Achilles heel or not?

If there is a country, which should receive our apologies, that is Greece. We need to apologize for having demonized a small and modest economy (less than 2% of the EU GDP) as the black sheep of the European Union and the challenger to the abstemious efforts that the northern economies have parsimoniously done, over years of sacrifices.  Right before the financial crisis of 2008, Greece and a number of smaller EU member states were completely ignored by the larger audience, as the study conducted by MediaTenor indicates. Greece was featured as a great place for vacation, a quite inexplicable winner of the European soccer games of 2004 and a layback country, which was enjoying more than others the newly gained prospects of a novel integrated European market. In the same way, we did not know that Greece was the country with the highest GDP growth in the period 2001-2007 compared to other advanced economies, with peaks of Real GDP growth of 5.9% (2003), and averages around 4.5% in all of those years, well above the countries in western Europe and in par with what we would define today, “syndrome” of an emerging economy. Like this was not enough, the Greeks had systematically been the most hard-working people of the European Union, with over 2000 working hours per person, inferior only to Chile and Korea, when we look at data from the OECD (2012).

The situation deteriorated for two major reasons, which need to be understood:

1) Public sector overspent and became bulkier than ever. Government spent their money in the least strategic areas and the infrastructural works that got commissioned were not supported by a real plan of competitive expansion and growth. It was money spent without calibration and detached by objectives of enhanced competitiveness for the Greek firms.

2) Private consumption provided an illusion of growth, being this one the only drive of the economy. The problem with an over-dependency on consumption is that companies feel complacent to deliver to an existing demand, without investments in the industrial processes and/or in research and development. Over time, as soon as the purchasing power collapses or demand defaults, companies do not have reserves for a frugal innovation that can help them regain the market and as a consequence, they lose ground.

From the above, while we recognise a clearly flawed economic model, we have Frankensteined an evil portrait of a guilty economy, unjustifiably. This false perception caused enormous damages to this small country, which found itself isolated from the international community, suppressed by the increase public debt and impoverished by the sudden lack of investors ‘confidence, which threw them in the hands of an ugly speculation.

But is this how the story ends?

Following on the work presented by Dr Terence Tse on this very topic, the economies of the South of Europe could give us new oxygen in this fatigued European Union, if we can switch our perceptions away from the belief of the German intervention, as the only reliable response to a much needed EU economic recovery. The German model is not as strong as it looks and Germany is moving quickly into the risk of an infrastructural stall, mainly due to the lack of domestic investment, this being one of the primary reasons for the European deflation.

Why should we look at the South?

This model of growth is inefficient from a macroeconomic perspective because it incurs into dispersion and disposal of public funds, but it could be very efficient from a microeconomic lens, which is where markets reside. If we are able to design our European economic recovery out of private domestic investment, rather than financial institutions and banks, we will generate what the Americans have coined as the grassroots movement, which is a community driven approach towards engagement and growth. If we flip this side of the story, what used to be the dormant economies, may ignite the beginning of a new dynamism. Since perception needs to change, to embrace a more inclusive economic model, understanding how the South can provide us with new pockets for development will be the challenge of the European public policy agenda in what will become the newly elected Parliament in 2014. And why not, we may want to use a Greek word “Αναγέννηση” (Anagénnisi= Renaissance) to embrace this new glimpse of light as auspice for a new beginning. Let’s salute this hope!

Dr. Mark Esposito is an Associate Professor of Business & Economics at Grenoble Graduate School of Business in France, an Instructor at Harvard Extension School, and a Senior Associate at the University of Cambridge-CPSL in the UK.

4 Responses to Do We Want to Solve the Eurocrisis? Let’s Look South!