Posted on February 14, 2014 by Eurocrisis in the Press

Against ample discouraging evidence, expressions of false optimism occasionally enter into the debate on the Euro crisis. As an example of such optimism, a previous post on this blog by Mark Esposito voiced high hopes for entrepreneurialism in Southern Europe. Unfortunately, the confidence in entrepreneurship is misplaced, because the symptom is being mistaken for a cure.

First, while there are indeed high rates of entrepreneurship Southern Europe, it is of the wrong kind.

Entrepreneurship has long been recognised as an important factor in generating economic growth[1], but the post gets the roots of Greece’s (not so new) entrepreneurship wrong. Where there are few employment possibilities people will have to become entrepreneurs – but these are subsistence entrepreneurs, which are quite distinct from the holy grail of transformational entrepreneurs found in the more dynamic economies.[2]

Rather than relying on the assumption that domestic capital formation is a sign of the great things to come, let’s look at some actual data. Data from the Global Entrepreneurship Monitor show that in Greece, about 30% of entrepreneurs are subsistence entrepreneurs. Only about 20% of new entrepreneurs in Greece, Spain, and Italy believe that that they will employ more than 5 people within 5 years. Only about 13% of Greek entrepreneurs think that it is a good idea to start a business where they live.

This subsistence entrepreneurship is also in part to blame for the high number of working hours that Esposito sees as a sign of the Greek economy’s potential. Although a source of pride for some, it reveals inefficiency more than anything else. Countries with a large number of hours worked per employee tend to be those that are less efficient. What’s worse, since 2009, Greeks had to work longer hours while labour productivity decreased. Moreover, in an economy with a share of self-employed as large as Greece’s (31.9% in 2012) – often as farmers or shop-keepers – working hours tend to be longer (see here and here). 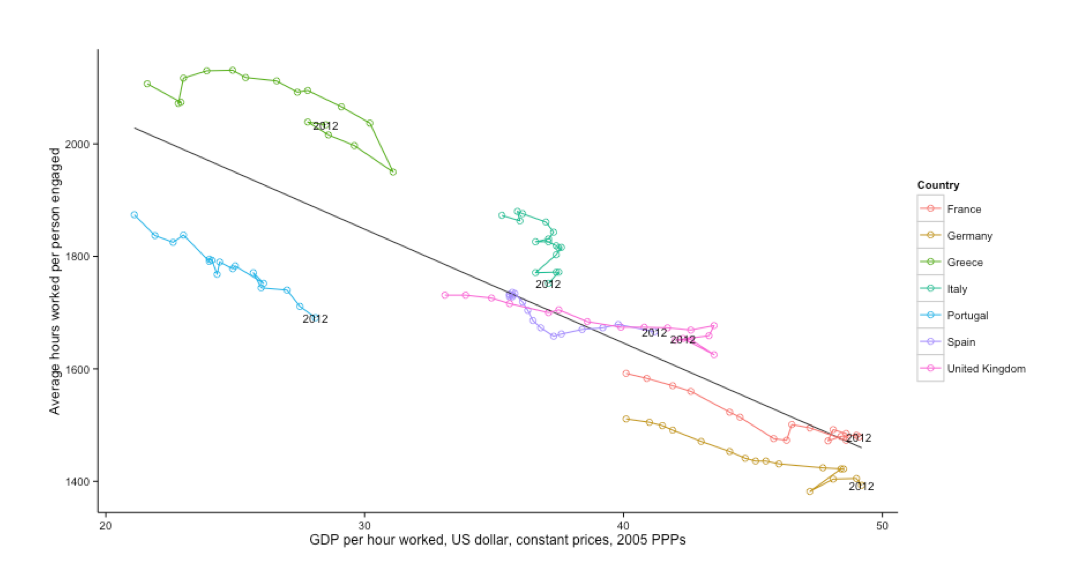 If anything, there are too many of these enterprises in Europe’s south. A quick look at employment data helps. The following graph shows that, in 2007, just over 58% of employed Greeks worked in firms with fewer than 10 employees. The situation in Italy, Portugal and Spain is similar, though somewhat less pronounced.

There are few medium-sized companies in these countries, which would indicate that most entrepreneurs do not make it to the transformational stage – not least because they are not “true”, i.e. growth and innovation-oriented entrepreneurs (see here and [3]). The entrepreneurship we witness in Europe’s South may help people to cope with the crisis, but it is at best a band-aid rather than a solution to the eurocrisis. 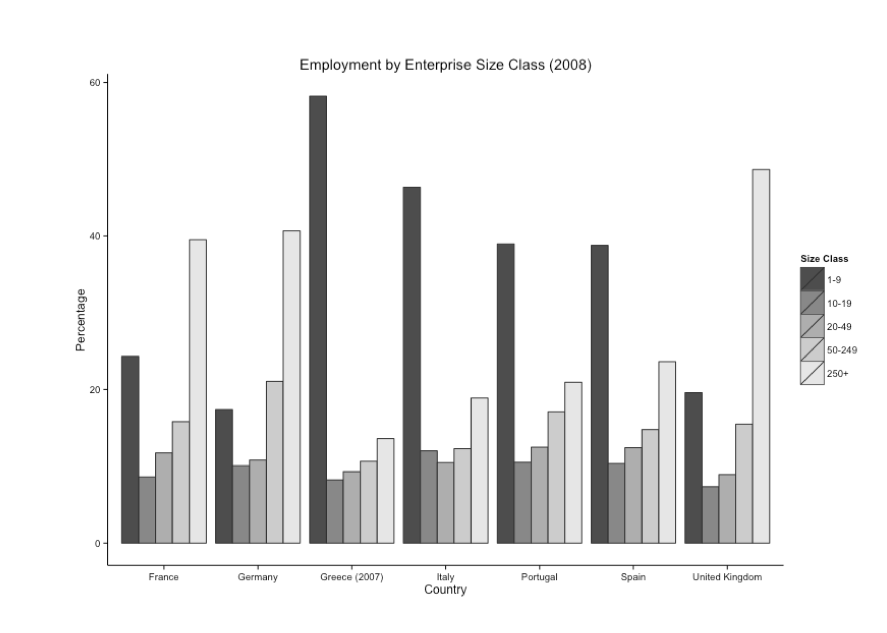 Second, despite this entrepreneurialism the conditions for small businesses to survive and expand in Southern Europe’s economies are far from ideal.

Unfortunately, the OECD does not provide data on entrepreneurship in Greece, but since Esposito urges us to look south, here are some data on enterprise formation in Spain, Italy and Portugal. Here, the picture is somewhat less clear-cut, but with the exception of Portugal and the UK (and ignoring bankruptcies), entrepreneurship is actually declining. The euro crisis has not enabled entrepreneurialism. 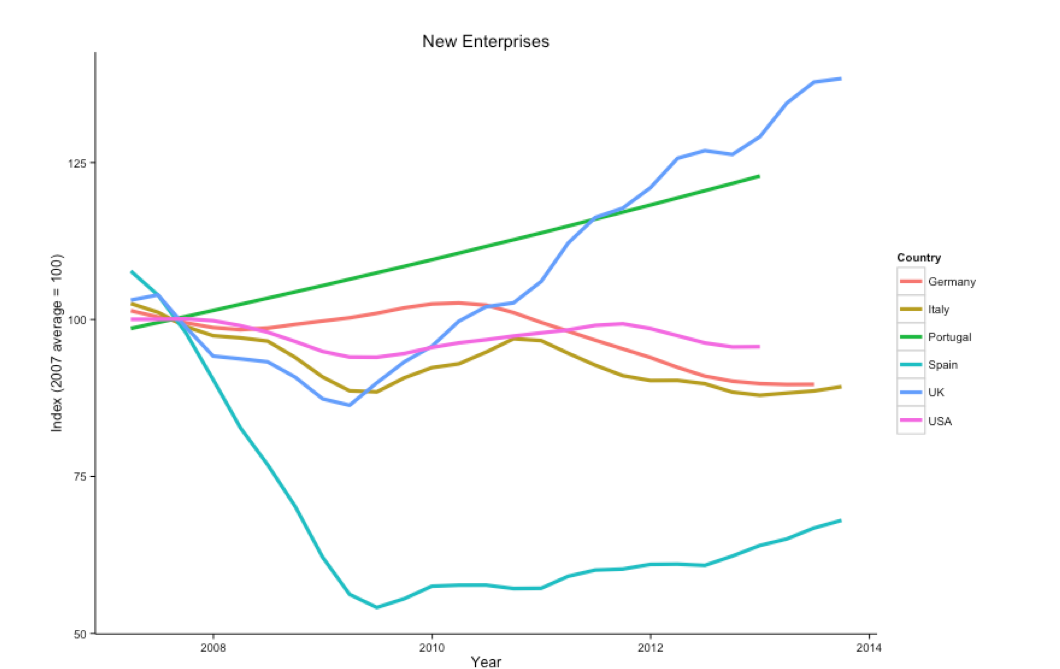 Lack of access to finance, corruption and overregulation stifle transformational entrepreneurship. According to an EU survey, 32% of Greek entrepreneurs cite access to finance as the most pressing problem facing their ventures.  And even though Greece and other Southern European countries have created more business-friendly environments, Europe’s South still continues to lag behind when it comes to the ease of doing business.

Of course, Germany’s ‘model’ should not be transposed to countries such as Spain or Greece – it is no secret that any reform programmes need to address the local needs and priorities. How exactly these reforms should look like is subject to much debate. But wishful thinking, misinterpretation of data and lack of attention to the context surely don’t make a good starting point.

Stefan Bauchowitz is a researcher at the Department of International Development at the LSE.

[2] Schoar, Antoinette (2010), The Divide between Subsistence and Transformational Entrepreneurship, in: Lerner, Josh and Scott Stern (eds.), Innovation Policy and the Economy, University of Chicago Press.

6 Responses to Entrepreneurship in Southern Europe: Symptom or Solution to the Euro Crisis?