Posted on April 7, 2014 by Eurocrisis in the Press

If we were to believe the forecasts from the European Commission, unemployment in the Eurozone appears to have started – at long last – showing signs of small but fragile recovery. However, that does not mean we can rest on our laurels as the economic outlook in the near term remains rather bleak. We can still expect a bumpy ride lying ahead through peaks and troughs, crashes and reboots. This ride is likely to be especially harsh for the growing army of jobless youths.

Unemployment in the European Union 2013

Unlike past economic crises, the burden left by the most recent one has not been shared proportionally among workers of different generations. Those aged between 15 and 24 are paying a high price, if not the highest in the aftermath of the crisis. The issue of youth unemployment used to only haunt weaker economies, such as those of southern Europe. For instance, both Greece and Spain have hit 50% in recent years. However, the current crisis has even brought the issue to those countries that are supposedly the richest and economically most robust: the US youth unemployment rate is some 16%, while in the UK and France, it is 20% and 25%, respectively. Even worse is that the youth unemployment issue has been deteriorating over time. While youth unemployment often refers to the number of those who are jobless, many of those who are lucky enough to be in employment are actually holding on to short-term and temporary contracts. Very often they have no choice because they have been locked out of the job market where permanent positions, occupied by the older generations, are protected by rigid labor market regulations. 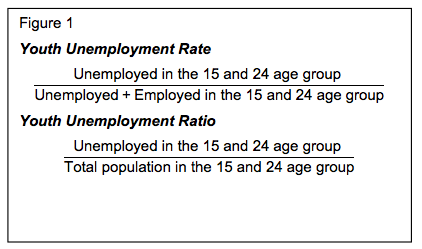 age group (see figure 1). An important yet oft-neglected issue with this measurement is this: given that not every young person is in the labor market, the youth unemployment rate does not reflect the proportion of all young adults who are jobless. Those who are still in education, for instance, are therefore not included. In other words, a 25 % youth unemployment rate does not mean that “1 out of 4 young persons is unemployed” – it only means that 25% of those currently in the labor market is not employed. Yet, such interpretations of youth unemployment rates are frequently used as headlines, perhaps because they seem more newsworthy.

It is in this context that some argue that the youth unemployment ratio is a better measure. This ratio refers to the number of unemployed in the age group of 15 and 24 divided by the total population in this age group. Hence, this takes into account those who are still at school. Using this measure, the numbers look far less alarming. If we were to compare youth unemployment rate and ratio (figure 2), we could notice that in some economies – especially those in southern Europe – the youth unemployment situation is difficult but not necessarily disastrous. This leads us to believe that if we were to make more and better use of the unemployment ratio and focus less on rate, we would probably avoid many of those stark and dispiriting comparisons between the north and south of Europe. This, in turn, may result in creating less of a political impasse over the idea of a two-speed recovery in Europe.

However, debating the merits of rate vs ratio may be beside the point. For instance, neither take into account those employed in the informal economy, which is estimated to be 10-30% of total EU GDP. Another element that is missed out is the fact that many youths are only employed in jobs that offer little or no prospects for career development.

What is also a very real problem is that if young people are the source of innovation, and that innovation is the basis of lifting a country’s competitiveness, the employment situation of younger generations may well be undermining our own economic strength. Indeed, it is highly probable that the lack of opportunities for young people to excel and put their talent to good use have led to the long-observed gradual deterioration of competitiveness in the Eurozone. In short, youth unemployment is not just about more and more young people experiencing socio-economic deprivation, it is also about the dropping standard of living for all of us.

Some may argue that the older generations may be able to drive innovation. However, we think this is unlikely to be the case.  While young people struggle to break into the job market, senior workers often struggle to re-join the workforce. Those in the middle, by contrast, are the most privileged and advantaged. They are more likely to have jobs in general and hold most of the wealth in the economy. This makes it easy to forget that they also bear most of the burden for funding social welfare. Compounded by weak economies, they may become more reluctant to take new entrepreneurial risk. This, in turn, effectively lowers our chances of producing innovations. Stifled labor mobility would thus indirectly hurt our ability to innovate.

At the same time, the vastly different benefits in terms of income stability, mobility and pay enjoyed by the different generations is likely to increase demands on welfare systems, while producing greater social exclusion and less harmony within the society.

The need for action is clear. Continuing down the current road would only make us all worse off; making our economies vulnerable to any unexpected external shock. The challenge is complex and requires efforts on several fronts. First, we believe that it is paramount to integrate those who have been economically marginalized to achieve long-term economic benefits and sustained competitiveness. It is paramount for governments and businesses to make better use of the talent of young people. This in turn should allow more innovation to emerge, which creates economic benefits and increases competitiveness.

European institutions need to coordinate efforts to come up with a realistic set Europe wide measures. Surely, Europe has been doing this, as this is the raison d’être of the EU. The problem is that, more often than not, EU-wide policies end up either adding red tape or being inconsistent with national regulations.

National governments need to deal with the youth unemployment issue proactively rather than coming up with half-hearted measures that are more designed to win votes than to produce demonstrable change. Just because most votes come from older generations with jobs does not mean that we can neglect the need of the disenchanted youth, many of whom have lost faith in their governments and societies. The best starting points would be to rethink existing labor market policies and contractual terms.

Individual citizens and communities need to accept that other forms of education are equally useful. We can no longer pretend that university degrees are the only means to employment. It is important to recognize the importance of – as well as the pragmatic nature of vocational education.

A great deal of thinking, efforts, courage and money would be needed to accomplish such changes. However, if done well, this represents an opportunity to redesign our economies and societies for the better.

Dr. Mark Esposito is an Associate Professor of Business & Economics at Grenoble Graduate School of Business in France, an Instructor at Harvard Extension School, and a Senior Associate at the University of Cambridge-CPSL in the UK.

This entry was posted in Europe and tagged European recovery, unemployment, youth unemployment. Bookmark the permalink.

2 Responses to The lost generation: what is true about the myth…