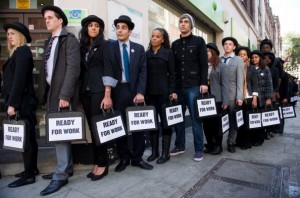 Numbers never lie. However the fashion of macroeconomic valuation has a long history of interpreting partially the truth that numbers are intended to resonate. During the last four years, statistical numbers regarding the Greek economy have been interpreted by multiple economists, international investors, and public policy decision makers. Amongst many others, the most popular numbers regurgitated by mass media are the 60% youth unemployment, the 160% debt-to-GDP ratio, the 10% deficit, and the excessive credit default swaps (CDS) spreads widening. These numbers on the country’s current economic state, along with the inverting of the demographic age distribution pyramid, has led traditional methods of macroeconomic growth research to assure investors that the Greek economy has little or negligible growth potential. As a result, the public opinion has come to a consensus: the current Greek youth is a lost generation.

Greece has never had a clear national vision for its economy, in the equivalent way that the US, Canada, Germany, Israel, or the so-called Asian Tigers countries have. Greek youth have a very high intrinsic human-capital value, and an immense potential for novel support of its entrepreneurial capacity. In this essay it is argued that Greece’s success story may be captured by a national economic vision of becoming an uprising Knowledge and Innovation Economy.

Almost 50 years ago, the newly independent nation of Singapore faced high economic uncertainty and the key issue of unemployment. The case of Singapore resembles perfectly the condition of growth uncertainty that Greece is currently experiencing. The two cases share the lack of debt leverage to fund growth, inexistent competitive exports and industries, similar unemployment rates and social unrest, non-competitive wages for manufacturing, a strategic geographic location, troublesome demographics, and no room for foreign direct investments due to domestic low-end commerce. In fact, the major differences between the two cases are  Singapore’s lack of natural resources that Greece has and a significantly lower GNI per capita at that time. The economic miracle of Singapore that we witness today is attributed to the national vision that set the country’s labor force as the basis for economic development and prosperity. Specifically, it focused on training highly skilled labor for high-end manufacturing, R&D curating infrastructure, and setting an incorruptible bureaucracy reputation[1]. Less than a decade later, Singapore developed into a quick operations start-up location; factories being built in advance of demand, with its highly skilled workforce available in abundance [2].

Contrary to common perception, Greece has already accomplished the hardest part of such an economic transformation procedure, and it has the greatest highly-skilled labor potential globally. Normalizing numbers to a per capita basis, Greece has the highest number of students enrolled in tertiary education per youth population, globally[3]. In addition, the portion of these students enrolled in Science, Technology, Engineering, Math (STEM) programs is higher than the global average by approximately 4 percentage points, and higher than the European average by almost 8 percentage points. What can be derived from this interpretation of the numbers is that, in terms of human capital quality and quantity, the Greek youth present an extraordinary degree of competence to generate a highly-skilled labor force.

A small country, with underemployed scientists, unremarkable incubators, anti-entrepreneurial culture and institutions, and a large and successful Diaspora[4]: sounds familiar? The answer is obviously Greece. This, however, was also the case of Israel during the early 80’s [5]. At that time, Israel adopted the national vision of transforming the country into a start-up hub and becoming the champion attraction of venture capital. It implemented novel tax credit and fiscal policies, and later introduced the Yozma Program and the Heznek Program (seed co-investment fund)[6]. These incentives themselves, though, would not have been as successful if it were not for the committed Diaspora.

Equivalently, the Greek Diaspora has a long reputation of a vivid foreign presence despite its relatively smaller size compared to other ethnic Diasporas. This vivid foreign presence is not merely cultural, as opposed to common perception. On a per capita basis, the Greek Diaspora contributes some of the highest numbers of individuals attaining leadership positions in the fields of academia, public policy and representative politics, entertainment, journalism, and business. Focusing strictly on the population residing in Greece, over the last two decades, youth have demonstrated a constantly increasing performance in math and science Olympiads, involvement and leadership in global youth organizations. Interestingly enough, the number of native Greek youth at the world’s top foreign academic institutions is the same as that of China during the mid 80’s. Moreover, the current fiscal crisis and youth unemployment has led to a multiple-fold increase in the amount of start-ups by young entrepreneurs in Greece that attract and inspire the creation of new venture capital funds and mentorship initiatives.

Ironically, research conducted by the Global Entrepreneurship Monitor[7] reveals that Greece scores globally as the highest in the Fear of Failure index and that it has the lowest performance with regards to financial support. Yet despite this, it still exhibits an above-average rate of established business ownership and ranks 6th among innovation economies with respect to women’s participation in entrepreneurial activity. Thus, it is to conclude that all that this untapped potential needs is a “final push” and a vote of confidence.

To achieve or surpass the high growth rates of Singapore and Israel, a national vision of creating a Knowledge and Innovation Economy must be adapted. The first step for the short-term is to conduct reforms on the current education and training schemes. Coupled with the current labor market and investment bureaucratic reforms already taking place, Greece will finally give the opportunity to its youth to employ and build on their high-skilled labor potential. Secondly, knowledge clusters and venture hubs have to be empowered. Recognizing the current government budget restrictions, this can be easily achieved by creating think tanks and spearheading venture capital and R&D incentives via initiatives of high net worth Greek individuals and foreign funds, and, most importantly, mobilizing the Diaspora.  The final step is setting the foundations to prevent any future “brain drain” of academically and professionally competitive Greek youth, as this constitutes the greatest risk to sustainable growth failure. This specific growth potential of Greece, which is based solely on its high quality youth human-capital-wise, is evident. The numbers are there, and they do not lie.

Unlike the current stigmatization of Greek youth as lazy and volatile, Greek youth exhibit high amounts of energy and passion, as all youth around the world. Bearing in mind all the numbers mentioned previously, it is my personal interpretation that, Greek youth are simply given the wrong opportunities to use their energy and passion. President Clinton and James Carville were known to use the phrase “It’s the economy, stupid” to continuously remind themselves of their objectives during their victorious 1992 US elections campaign. What Greeks need remind themselves of now is: it’s the Youth, stupid.

*This essay was presented at the Clinton Global Initiative 2013 for an award by the Ambassador-at-large of Greece Gianna Angelopoulou.

Vasileios Tsianos studies Chemical Engineering and Economics at the University of Toronto. In 2013, he represented European and Greek youth at the Y20 (working group on youth of the G20 Summit), the Saint Petersburg International Economic Forum, and the Clinton Global Initiative.

No Country for Young People

1 Response to It’s the Youth, Stupid! Greece’s most undervalued asset