(No) Time for activism: the changing face of protest movements 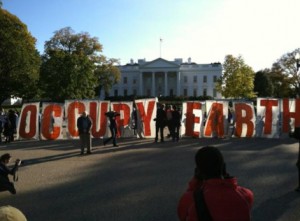 New media and technologies and, in particular, social media have been celebrated over the last few years for their role in protest movements, such as the 15-M movement in Spain, the ‘Aganaktismenoi’ in Greece or the global Occupy movement. In that context, digital media have been heralded as the saviour of democracy and civic engagement as they decrease the costs and efforts of participation, organizing and mobilizing to a minimum. In the context of the Euro crisis, they have been hailed for giving voice to the citizens and being the tools for the creation of networks of resistance to national government and European policies. However, the temporal logics of digital media and platforms have consequences for the organization and identity formation of protest movements, and it is these consequences that I would like to address in this post.

The question of digital technologies and the issues they pose for the organisation of social movements can be seen within the recent a growing commentary and interest in time or better in the lack there of. Art critic Jonathan Crary discusses the ends of sleep and the sociologist Mark Davis speaks of hurried lives. What these commentaries share is the underlying argument that our experience of time is closely linked to digital media technologies that enable immediate delivery of content and services. It is argued that these technologies – intended to simplify our lives – increase the speed of (information) exchange in society and thereby extend the stress levels in general. If one takes this observation seriously what are then the consequences for democratic conduct and deliberation?

The Occupy Wall Street movement and its media tactics provide some empirical evidence to this discussion of the consequences of the acceleration of speed by digital media towards immediacy for democracy. Being initially ignored by the mainstream news media, social media were quickly filling up with Occupy Wall Street-related content: On the first day of occupation more than 4,300 mentions of OWS on Twitter were counted exploding to 25,148 until 2 October 2011. After three months there were 91,400 OWS-related videos uploaded on YouTube (DeLuca, 2012). In that sense, OWS is one of the most prevalent examples of media as arenas for the struggle about social change. DeLuca et.al. suggest that not mainstream media, but social media provided visibility of the occupiers. The urgency of using social media to gain visibility resonates with reflections by one of my informants, who was involved with the Media Working Group and was, for example, responsible for streaming live from many OWS events. He recalls that the importance of social media was reflected in how the media tent was organized spatially:

So you entered the park and turned left and then there was the media tent. And there the people were sitting with their laptops and not talking or discussing that much. They were just sitting there glued to their laptops [Josh (name changed)].

Early on the Media Working Group contributed to a constant stream of tweets, blog and Facebook posts. They also set up a 24-hours live stream from the camp, with programming elements including scheduled interviews with occupiers and passers-by, talks, music sessions etc. The group and affiliates produced a constant flow of images, memes and texts to be circulated. Out of necessity the activists appropriated the logic of social media from the very beginning. Aiming for visibility of the movement and its discussions, occupiers contributed to the production of digital media content in innovative ways.

However political projects such as OWS – that was also a micro experiment of social and political organization in a shared space – need time. The need for time is reflected in the numerous stories of endless meetings of the General Assembly to develop group consensus. The current political and economic culture that is reflect in and by the temporal structuration of dominant media technologies, however, does not allow for these time consuming procedures. In its way of organizing the everyday life in the park OWS hence formed a counter-picture to the dominant culture of speed, in its media practices, however, it had to adopt fairly quickly the logics of the social media ecology including programmability, popularity, connectivity and datafication that come with increased speed of circulation and might not leave (enough) time for activism.

OWS was both about space (connecting the uncountable camps all over the world via social media) and time (spending time together and taking time for organizing the life in the camp). As the camp was evicted however the component of shared time in the same space disappeared and OWS was destined to exist in the networked sphere, which is characterized by the above logic of speed, immediacy and newness. The movement broke up into smaller subdivisions with more specific causes such as Occupy Sandy in New York and New Jersey operating to restore shore areas struck by Hurricane Sandy. Similar developments could be observed in Spain among the 15mayistas, where smaller, more focused platforms, e.g. the Platform for those affected by mortgages (PAH) and movements, e.g. Movement for the Right to Housing, emerged after the encampment evictions and the loss of a shared space.

The outcomes of OWS as a micro-experiment in democracy have been questioned by different commentators (Roberts, 2012). Similar questions about the lack of long-term effects in formal politics have been made about the Indignados in Spain, as well as the movement of ‘Aganaktismenoi’ in Greece. However, the recent emergence of Podemos (“We can”) as a 15mayista party in the aftermath of the encampments appears to prolong the debates and political struggles initiated by the 15-M movement. Taking Podemos that reached 1.25 million votes in the latest European elections as an example, it is safe to say that the outcome and consequences of protest movements such as OWS and 15-M are still under negotiation while the current structure of feeling requests outcomes immediately and constantly.

Dr Anne Kaun is a post-doctoral research fellow at the Department for Media and Communication Studies at Södertörn University, Stockholm and will commence a visiting fellow position at the Annenberg School for Communication, University of Pennsylvania

4 Responses to (No) Time for activism: the changing face of protest movements