Although it is more than two years now that the Indignados took over the streets and central squares in Spain and Greece, the movement remains the most emblematic expression of civic resistance to imposed austerity and the economic forces at the root of the Eurocrisis. A comparative exploration of the press coverage in Spain and Greece of the respective expressions of the movement, the Spanish Indignados and the Greek Aganaktismenoi, reveals one significant commonality in how the movement was represented, namely an overall favourable treatment by the mainstream press. Despite the positive coverage, however, or perhaps because of it, the press did little to connect the movement to actual policy-making and political institutions. This press emphasis on the protest side of the movement may have detracted public attention from the attempts of the Indignados to provide constructive policy input in Spain and Greece and in the long run undermined its potential overall impact. 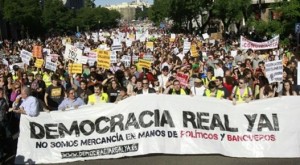 Existing media research has often illustrated how the reporting of social protests by mainstream media follows specific patterns and frames, described as “the protest paradigm” . Characteristics of this formulaic reporting is that it disparages or even demonises protesters, undermines the political force of the protests and legitimises state violence against demonstrators. An exploration of the press in Spain and Greece shows that the coverage of the movement of the Indignados (or Aganaktismenoi) did not overall follow the protest paradigm, an observation that applies to newspapers of both centre-left (El Pais and Eleftherotypia) and centre-right (El Mundo and Kathimerini) political orientation.

It was particularly the heterogeneity of the protest participants that was celebrated in both the Spanish and the Greek press. This was seen as an expression of the independence of the movement from specific political lines and party alliances, a characteristic that was often highlighted in the relevant reports. This independence along with the peaceful tools of protest, the occupation of public squares by sitting and camping (“sentadas” and “acampadas”), were framed in the press as the main characteristics of a novel phenomenon, “something that cannot be defined”.

This favourable treatment of the novel character of the protests was also illustrated by a focus on the personal stories of individual protesters. Although the majority of media research has pointed out that in the coverage of the social movements and protests the voices of the participants are often silenced in comparison to those of the authorities or the non-protesters, the stories and voices of individual participants were at the forefront of the coverage of the Indignados, especially during the reports of the first days. These stories were reported as illustrative of the heterogeneity of the protesting crowd and the apolitical character of the movement, as they focused on the particular circumstances and motives of the participants (“Ana, writer and librarian…”, “Ramon, a civil-servant”, “Maria, a secretary until last year, and currently unemployed”, etc.). 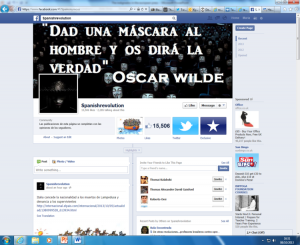 Equally central in the coverage of the protests, and perhaps an important part of the possible legacy of the Indignados, was the focus on the role the social media played in the organisation and conduct of the protests. In the Greek press this was another example of the “innovative” and “novel” character of the movement. The Spanish press not only described the role of Facebook and Twitter as tools of co-ordination but even partook in this process by repeating the hashtags used by the protesters (#nolesvotes; #acampadasol), turning itself into a loudspeaker of the movement.

There were of course significant differences in the ways the movement was reported in the two countries, as the occurrence and character of the protests varied. The coverage of the Indignados in Spain, where the movement originated, was much more extensive and persistent during the first months that followed the first protests in May 2011. Although the initial coverage did not draw links between the different demonstrations across Spain, as the days passed and the protests gained popularity, the press coverage significantly increased and the movement was framed as the “Indignados” or 15-M reacting against the established “political model” (“Democracia Real!Ya!”, “No los votes”) and the financial elites (“banqueros”).

The articles related to the movement varied, as they not only included reports from the protest sites, but also extensive analysis, reflections on the causes of the demonstrations, their endorsement by public figures, and the reactions of politicians. The coverage was significantly more extensive in the centre-left El Pais. Following the “protest paradigm” of reporting, El Mundo initially focused on the clashes with the police after the demonstrations during the first days but also switched to a more favourable and extensive coverage of the movement after the first few days. 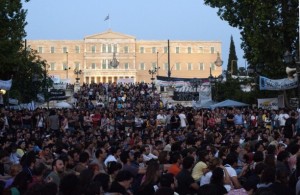 The Greek Aganaktismenoi, born as a direct response to the Spanish Indignados, had admittedly shorter life-span as a movement and even shorter span of media coverage. The Greek Indignados started their protests on the 25th of May, after Spanish protesters provocatively asked on social media whether the Greek people are fast asleep. The links to the Spanish movement were, therefore, prominent, especially in the first days of the coverage, which seemed to be underlined by a sense of national competition and pride.

The political status quo, encapsulated in the concept of “the Parliament”, and austerity policies were identified by the press as the recipients of the rage and indignation of the Greek protesters. Another prevalent theme in the Greek press was the politics of space of the protest. After the first days of the peaceful demonstrations, it became evident that there were divisions among the protesters, the ones with a more evident political orientation occupying the lower part of Syntagma Square and the more diverse crowd being congregated in the upper part, closer to the Parliament.

This preoccupation with the spatial elements can be seen as part of the general trend of the Greek press to focus on the spectacle of the protests. The daily reporting of the numbers of the demonstrators and the focus on the carnivalesque character of the protests were also part of this emphasis on the spectacular. Equally remarkable was the use of emotional language in the reporting of the protests focusing on the excitement, sentiments and affective reactions of the participants.

Although protests of the Aganaktismenoi continued throughout the summer months, press coverage decreased considerably a week after the 25th of May 2011. By the end of the summer, the focus of the newspapers was once again turned to the consequences of violent episodes following the protests. The voices of individual participants were once again absent from the reporting, which sometimes even expressed direct criticism and disappointment.

Drawing solid conclusions from the comparison of the Spanish and Greek press coverage of the Spanish Indignados and Greek Aganaktismenoi is of course a complicated endeavour. Based on this initial analysis, however, it is possible to argue that these protests, signal a significant change in the dominant way the media usually report protest movements in these countries. Their apolitical and national character turned them into uncontested newsworthy events, and therefore attractive to the press. Even right-wing leaning newspapers, traditionally very critical with civic resistance movements ended up depicting a positive image of them. It was perhaps their ‘apolitical’ character, however, that might have led to the demise of these movements not only in actual terms but also in the popular imagination as effective forms of civic action and engagement. Despite the extensive and favourable coverage of the Indignados, the press hardly managed to place the movement in direct dialogue with mainstream political processes and decision-making. Perhaps this was a problem inherent to the movement itself. Or perhaps having it is too demanding to have such expectations from the press.

Dr Maria Kyriakidou is a lecturer of Cultural Politics, Communications and Media at the University of East Anglia. She is an Associate to the Southern Europe International Affairs Programme of LSE IDEAS and a co-founder and editor of Euro Crisis in the Press. Follow her on Twitter https://twitter.com/Maria_Kyriakid

9 Responses to The Indignados in the Spanish and Greek press: constructing narratives of civic resistance