Posted on September 8, 2015 by Eurocrisis in the Press 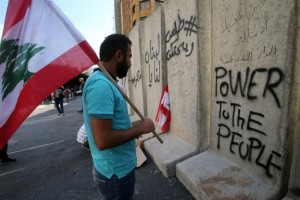 The 29 of August 2015 may one day be remembered as historic in Lebanon’s turbulent history. At 6pm angry people from different ages, walks of life, regions, and sectarian communities began to gather in Martyr’s Square in central Beirut. Carrying Lebanese flags, banners, and lots of grievances, they protested against Lebanon’s ruling class. ‘Enough’, ‘Get off our backs’, and ‘Down with the rule of the Mafia’, banners read. Holding her children’s hands, one elegantly dressed woman said ‘I am here to scream in the face of this ruling mafia, enough…leave us alone!’ This is a ‘peaceful protest to rid Lebanon of the sectarian political class that has divided us’, another protester cried. Eager to change the world and echoing their peers in the Arab world, angry youth shouted: ‘The People want the fall of the regime!’. A less hopeful woman’s banner read ‘Politicians are like sperm, one in a million turns out to be human being!’

Political rallies are not new to Lebanon. Since 2005 Martyr’s Square has seen more than eight major demonstrations and sit-ins. After the assassination of Lebanon’s prime minister, Rafic Hariri, in 2005, the square attracted two major protests, March 8 and March 14, each claiming to represent the soul of the divided country. But the August demonstration was different. For the first time in the country’s history, the Lebanese protested not against one another but against a ‘political class’, resembling the ‘indignados’ or ‘aganaktismenoi’ anti-establishment protests that engulfed Spain and Greece and the Midan al-Tahri demonstration in Egypt. Indeed, similarities abound: a disenchanted, otherwise apolitical and heterogeneous, multitude rising against a corrupt ruling elite and challenging traditional political forms of contestations. In the protest two young men, one from the Shi’a southern suburb and another from a Sunni neighbourhood of Beirut, chanted together against the ruling elite that deprived them of their basic needs: water, electricity, jobs, and the collection of trash.

‘You stink’ and ‘We will hold you to account!’

Demonstrations are occasions that transform private expressions of grievances into collective contentious action against imagined or real targets. In Lebanon the complaints many habitually raise —Where is the state? Politicians are thieves! Sectarianism is mother of all ills!—transformed into public claims in the demonstration. Like contentious actions elsewhere, the Beirut demonstration involved three actors: protesters, a public, and a target (politicians).

Drawing the Lebanese public to such occasions was never easy. Lebanon is a religiously divided society. Many Lebanese identify first with the community and then with the nation—or to describe in other words, the nation is imagined through the eyes of the sectarian community. Lebanon’s democracy divides power among Muslims (Sunni and Shi’a Muslims) and Christians. Electoral laws—carefully stitched to preserve sectarian quotas and political preferences—reinforce the sectarian system; they foster politicians that thrive on sectarian cleavages and fears and cronyism. Sectarian and political divides have, moreover, exposed Lebanon to regional politics that regularly destabilise the country, obfuscating crucial socio-economic issues.

The August protest, however, constituted a wake-up call: a cognitive and identity shift that led many to realise their common socio-economic grievances and to identify a new rival: the political class. Popular uprisings bring agency back to people. In Lebanon a sense of powerlessness towards politics and politicians had generally permeated the social consciousness of many; the demonstrations brought back power and hope.

It is ironic that the spark of this shift was triggered by the trash-collection crisis. The government’s inability to agree on a new contract for garbage collection (and on a garbage dump) saw trash piling up in the hot month of August. People were furious. The crisis exposed naked the government’s incapacity and corruption. But this crisis was only the tip of the iceberg.

Despite the political stability that the country enjoyed in 1990-2005 and high government spending (Lebanon has a debt of over $70 billion, 140% of GDP), the country still suffers from electricity blackouts, shortage of potable water, high telephone bills, and poor infrastructure. The state—as a public domain of rights and duties—has never had a comforting presence in the Lebanese political consciousness. In the absence of basic public goods, many Lebanese resort to private suppliers of electricity (whom, like the country’s politicians, are also dubbed as the ‘mafia generators’) and water. Every Lebanese pays two bills for each of these services.

Political stalemate since 2005 has eliminated formal channels to hold the political elite accountable. Due to the regime’s fragmented responses to the Syria war, it has failed to hold parliamentary elections and to elect a new president. But, despite the stalemate, and with the exception of few sit-ins, no popular protest took place until August when many realised that there is no ‘private’ solution to garbage collection. People protested and, intentionally or otherwise, screamed: we need a state!

Coming from various socio-political backgrounds, students, professionals, artists, and activists began to organise. One called its campaign ‘Teliit Rihitkom’ (You Stink), referring to politicians; others called theirs ‘Helo Ana’ (Leave Us Alone), and still others ‘Badna Nhasib’ (We will hold you accountable). These mobilising frames drew attention and numbers. Most campaigners are not politically organised; Lebanese political parties, they stress, are estranged from political reality and have failed to address people’s grievances.

What is to be done?

The activists carry various political claims: some of a leftist persuasion want to radically eliminate the sectarian political system; others, seek piecemeal reform and want to change the ruling elite. Their varying forms of political protest (peaceful sit-ins; violent confrontations; hunger strikes) have increased political awareness of socio-political problems in Lebanon. Contesting Lebanon’s elite has proved promising: not only for creating a new political rift—people versus the political class—but also for shifting the political debate, which was hitherto dominated by the mainstream March 8 and 14 camps, to a new focus reflecting people’s concerns. Moving forward will not be easy.

Ruling regimes are sticky (not only ‘stinky’). The Arab uprisings have shown how regimes fight back, in some cases causing civil wars and chaos. Like other Arab regimes, Lebanese politicians have first accepted people’s protests as legitimate and called for reform and dialogue; but then they went on to delegitimise the activists: some accused them of collaborating with the US, others suspected that the protest is a ploy by Hizbullah to control Lebanon—dominant political discourse is sticky too!

Divisions among the campaigners and mainstream politicians’ attempts to exploit them might weaken the emerging movement. In Lebanon’s polarised politics you will neither find a Lenin nor a Khomeini to clear the roadmap for the future nor a Mubarak or Bin Ali to target as a symbol of the past. Questions arise: Who is the ‘political class’? Is it all politicians, or only those who are brazenly corrupt? Is the popular Hizbullah part of the regime or not? Do you topple the government or keep it as the last bastion of order? Ultimately, do you follow a piecemeal transition or capitalise on this rare opportunity to call for radical change?

Lebanon might be heading on a bumpy road. Translating popular anger into concrete political resolutions will not be easy. Whilst this is not a revolution, it is the origin of a social movement—sustained campaign of claim-making efforts—that is likely to reshape Lebanon’s political landscape. The protest will not clear the political trash in Lebanon, but awareness of its odour is a revolutionary start.

Dr. Adham Saouli is Lecturer in International Relations at the University of St Andrews. He is the author of the Arab State: Dilemmas of Late Formation (Routledge, 2012) and his latest publication is ‘Back to the Future: the Arab uprisings and state (re)formation in the Arab world’, Democratization, 2015.

(No) Time for activism: the changing face of protest movements

This entry was posted in Events and tagged anti-establishment, contentious politics, Corruption, elites, Indignados, Lebanon, protest movements, sectarianism, trash politics. Bookmark the permalink.
We use cookies on this site to understand how you use our content, and to give you the best browsing experience. To accept cookies, click continue. To find out more about cookies and change your preferences, visit our Cookie Policy.