By Ellie Knott and David Rinnert

Over the past two years, well before recent events in Ukraine, the EU’s Eastern neighbourhood had become an increasing concern. Russia’s invasion of Ukraine, however, has led to a deteriorated political situation across the region. Ever since the Crimean annexation, Moldova’s future has been analysed with waves of pessimism. However, overly simplistic predictions about the country’s future and its geopolitical implications are not useful. 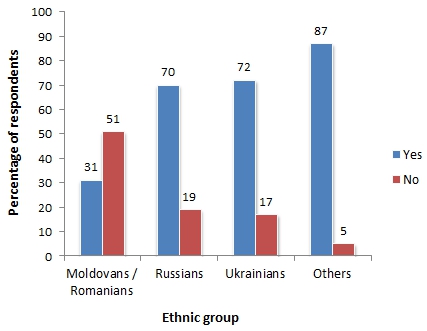 Third, political parties are trying to gain political capital out of these divisions and the Ukraine crisis ahead of Moldova’s Parliamentary elections in November. While the current pro-EU government, consisting of theLiberal Democrats, the Democratic Party and the Liberal Party, aims at signing the Association Agreement later this summer, the Russian-leaning Communist Party leader Vladimir Voronin underlines that Moldova “needs to have relationships with its strategic partners [Russia and the FSU countries]”. Nevertheless, as Chart 3 shows, recent polls indicate that the Ukraine crisis has led to decreasing public support for the Communists, who in 2013 benefited significantly from the domestic crisis surrounding former Prime Minister Filat. This piece originally appeared on the LSE blog EUROPP.

David Rinnert  is a Master of Public Administration dual degree candidate at the LSE and Hertie School of Governance in Berlin, with a focus on development and governance in the post-Soviet space. Following his undergraduate studies in Berlin, New York and Paris, he worked in Georgia and Moldova. In addition, he is an independent policy analyst and has published several papers on the region. You can follow him on Twitter: @DRinnert.