Posted on March 5, 2014 by Eurocrisis in the Press

Throughout the Ukraine crisis, Crimea has been described as a region with strong sympathies toward Russia. Based on her own research in the region, Ellie Knott takes issue with the prevailing view that ethnic Russians in Crimea necessarily have a strong Russian identity. She notes that much of the empirical evidence in this area is outdated, given it derives from 2001 census data. Citing interview responses, she argues that while a significant number of ethnic Russians do exhibit a Russian identity, there is evidence that this is not the case for many younger citizens who grew up after the fall of the Soviet Union.

In a comment article last month I resisted labelling Crimea as “the next South Ossetia”, Ukraine’s “Achilles heel” and “Russia’s next target.” In recent weeks, a connection has been drawn between Crimean violence in the 1990s and its call to secession with the idea that it “has a strong Russian identity”. However, the lack of engagement with people on the ground means many observers miss much of what has happened since 1991. Hence, while Russia might see Crimea as their next South Ossetia, acting to protect their citizens and compatriots, the situation in Crimea is very different. 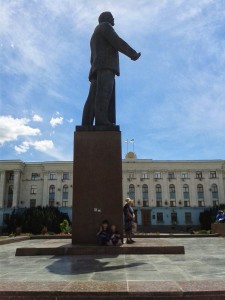 The Council of Ministers Building in Simferopol, Crimea. The Ukrainian flag has been replaced by the flag of the Russian Federation following recent events in the region.

The logic that Crimea is comprised of those with a “strong Russian identity” uses the 2001 census as evidence to suggest that the majority of the Crimean population identifying themselves as ethnically Russian (almost 15 years ago) is an indication of the state in which the majority would like to live. This has further entrenched the notion of Crimea as a peninsula of hotbed Russian nationalism waiting to secede. An article in RFE/RL recently tried to suggest that Russian nationalist separatism was increasing in Crimea based on an interview with a long known, and infamous, Russian nationalist Sergei Shuvainikov.

However, as Gwendolyn Sasse and Jim Hughes indicate, the Russian nationalist movements reached a crisis point in 1994 from which they never recovered because of their conflicting aims. They may have been successful in the last week at seizing power, but to have any idea about the depth of this nationalist sentiment it is necessary to talk to those outside of the Russian separatist movements, and in particular with everyday normal people, to see how far this idea resonates.

Interestingly, in around 50 interviews I conducted in Simferopol, the capital of the Autonomous Region of Crimea, in 2012-2013, I discovered that there was a general feeling that the chaos of the Russian nationalist movements had never really subsided. Organisations like Russkaia Obschina Kryma (Russian Community of Crimea) and the Crimean party, Russkoe Edinstvo (Russian Unity), continued to fail as a result of the infighting between their contrasting characters, some wanting to use the movements in support of their personal aims against their rivals, but less against mainstream politics. Local election results support this, with Russkoe Edinstvo consistently winning few seats (and just 4 per cent of the vote in the 2010 Crimean parliamentary elections), placing them far behind the majority Party of Regions, and even the Communist Party.

I also found a plethora of different opinions regarding what it meant to be Russian. Indeed, many young people preferred to identify politically as Ukrainian instead of any ethnic identification. These young individuals described a large shift between themselves and the older generation including their parents, who identified as Russian. In comparison, these young people identified as “more Ukrainian” and “Ukrainian citizens first” because they had been born in Ukraine, so to them Russia was somewhere foreign. They indicated that while at one time those in the peninsula would have identified themselves as being Ukrainian only if they were ethnically Ukrainian, and had probably been born elsewhere in Ukraine; the post-Soviet generation would tend to identify themselves as Ukrainian based on their citizenship and place of birth.

There certainly were a significant number who identified as ethnically Russian, but in my research I split this between two categories: ethnic Russians and discriminated Russians. The discriminated Russians were a small group, mostly aligned with the Russian nationalist organisations discussed above, who identified themselves not just as Russian, but as anti-Ukrainian and as victims of ‘Ukrainisation’ policies. In contrast, there were a far greater number who identified as ethnically Russian but without any sense of discrimination by Ukraine. These individuals were able to reconcile their ethnicity with residing in Ukraine, feeling that they were part of a normative project in which they wanted to be able to speak Ukrainian, as the state language, more proficiently.

Generally, the overwhelming feeling of those outside the discriminated Russians was that the feeling of discrimination in the peninsula and in Ukraine was unjustified given that Russian could be spoken freely. Moreover, there was the feeling that ethnicity and language were not related to quality of life, because in Crimea and Ukraine “everyone lives badly”. Using the 2001 census is therefore tenuous because of the amount of change in the peninsula, in particular among the post-Soviet generation, and because of the fuzziness of identity which does not pair neatly with the hard and mutually exclusive census categories of ethnically Russian and ethnically Ukrainian.

Therefore in 2012, I turned to look at the use of the Russian Compatriot policy, which facilitates migration to Russian regions and offers a few scholarships in Russian universities. The story was largely the same: a lack of interest and knowledge of what Russia was offering, outside of those involved with Russian organisations, and an absence of identification with the discourse of the policy. As two interviewees discussed, they did not identify as “compatriots” of the Russian Federation but rather compatriots of each other because they were from Ukraine.

One reason that Crimea should therefore not be compared to other ‘frozen conflicts’ is that there has not been wholesale passportisation such as in South Ossetia. It has only been since the situation in Crimea intensified that the passport issue has resurfaced and focused mostly on the quick acquisition of Russian citizenship by Berkut (the now disbanded special units of the Ukrainian police) returning home from Kyiv.

There should be caution with regard to how evidence is used about Crimea and what conclusions are drawn from this. I would argue that the biggest issue facing Crimea, and southern and eastern regions of Ukraine more generally, is the vacuum that has been left from the disappearing vertical power of the Party of Regions, which allowed the previously weak Russian separatist movements, with Moscow’s support, to seize power.

A Crimean referendum has been called for 30 March and as Jim Hughes argues, the phrasing of the referendum question will be a crucial factor. However with the current militarisation of the peninsula, it is questionable how far ordinary people will be free and able to voice their opinion. The views of ordinary people may not therefore matter in the short-term, as they are subsumed by a geopolitical struggle and possible armed conflict. However in the medium term, Russia will have difficulty converting the majority in Crimea to their cause.

This post was first published by the LSE EUROPP Blog.