Posted on September 17, 2014 by Eurocrisis in the Press

Gordon Brown, the former Prime Minister of the United Kingdom, recently wrote the following concerning the referendum on Scottish independence that will take place on Thursday:

So a new idea of citizenship is emerging. It is not cosmopolitanism if that means that national loyalties do not matter. It is a citizenship that upholds national identities while recognising the benefits of shared sovereignty – the kind of citizenship Scottish people can understand: being Scottish, British, European and a citizen with connections with a world wider even than that. It is not abstract: it represents how people now live their lives – connected constantly through mobiles and the internet, able to communicate with anyone, in any part of the world, at any time – involving an identity that is, for individuals, more a matter of choice than at any time in history.

Brown’s intervention is in the context of his support for keeping Scotland as part of the United Kingdom. What is interesting is he puts it in terms of global citizenship, something that one wouldn’t expect in a debate between two sides that seemed very fixed on their 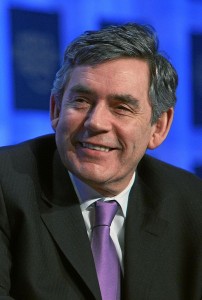 understandings of nation and nationalism. Brown’s point, here and in other places, is that the United Kingdom can and will change, but devolving into smaller sovereign nation states is not the way to go. Rather, a new kind of citizenship and a new constitution is necessary to bind the UK together and simultaneously give it the chance to become part of the world in a different way.

His arguments have a strong appeal for me. Brown’s understanding of cosmopolitanism is close to my own – a mix of local, national, regional, and global orientations that allows us to understand and act in the global political sphere in new and interesting ways.

I know that for many in this country, Brown is a polarizing figure. His role as Chancellor under Tony Blair was part of the New Labour process of shifting the United Kingdom toward more neoliberal economic policies. And his tenure as Prime Minister was filled with stories of bullying and poor governance. But since leaving 10 Downing Street, Brown has embodied the kind of cosmopolitanism he describes above – he advocates for his own small constituency in Fife yet continues to speak on issues of national and global importance. Unlike his predecessor, whose cosmopolitanism is the jet setting world of the corporate executive, Brown’s cosmopolitanism is Scottish, British, European and global.

Many friends and colleagues have strong views on the independence debate, and even in my own family we do not all agree on what is the best route for Scotland. Much of the argument for independence has focused on economics and culture, both of which are important. What I like about Brown’s point, though, is that it’s about politics, the kind of politics that I think is most important – citizenship, constitutionalism, cosmopolitanism. Moreover, these are concepts that are not distant and unimportant in the debate, but actually underlie the more prominent issues of currency, pensions, and the future of the NHS. 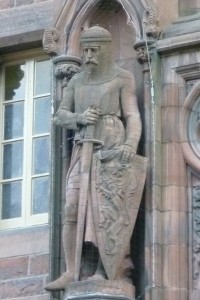 There are, of course, very good political arguments on the side of independence. They include the centrality of self-determination, disparities in power, and a vision of social justice in Scotland that is more progressive than the current UK government. But too many of these arguments for the Yes campaign remain insular and localised. I believe, like Gordon Brown – and like other important figures such as Pope Francis – that division and borders are not necessarily good things. Rather, I want a Scotland and United Kingdom that is part of the world in a new way.

In fact, the reason I can’t vote in this referendum is partly the result of the sovereign state system that creates artificial barriers. I’m an American citizen who has worked in the United Kingdom for 10 years. Two of my children were born here. Citizens of EU countries and some former Commonwealth countries residing here can vote, but for reasons that perhaps have more to do with the United States than with the United Kingdom, I don’t have that opportunity. Brown’s vision of a different kind of world, one in which a kind of global citizenship creates new opportunities for political engagement might allow me to vote on my own future (truth be told, I have indefinite leave to remain and am only not a citizen because I don’t want to pay the exorbitant fees – but why should I have to pay money to become a citizen?).

An independent Scotland might be able to engage in the world in this new way, and if the vote goes for independence, I hope it will. But I think the danger of nationalism, a negative nationalism that wants to find conspiracies and dangers in those ‘down South’ will only lead to further divisions. I agree with Yes campaigners that having a say in how you are governed is really important. And, there is certainly no guarantee that a united United Kingdom will create the kind of cosmopolitan representativeness that Brown advocates. But it gets closer to the global politics that I support, one that sees through and beyond the insularity of a single sovereign state to a wider global constitutional order.

This article was first published by the Arc of the Universe

Anthony F Lang, Jr holds a Chair in International Political Theory in the School of International Relations at the University of St Andrews and is Director of the Centre for Global Constitutionalism.

This entry was posted in United Kingdom and tagged Citizenship, Cosmopolitanism, Scottish independence. Bookmark the permalink.

1 Response to A Cosmopolitan Take on the Referendum