Posted on December 3, 2014 by Eurocrisis in the Press 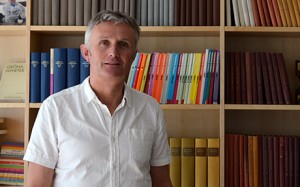 Euro Crisis in the Press talks to David Crouch about media coverage of EU-Russia relations and the recent search for Russian submarines off the Swedish coast.

You were covering the recent search for Russian submarines off the Swedish coast. How well do you think the news media in Europe did in their coverage of these (non) events?

European news media coverage was calm and measured by comparison with some Swedish media, which were – with honourable exceptions – a parody of Cold War hysteria, delivering examples of unfounded speculation and panic-mongering that would have been amusing were relations between east and west Europe not in such a serious state.

Some of the Swedish coverage brings to mind the description of The New York Times newsroom during the run-up to the invasion of Iraq given by the paper’s public editor as part of an apology to readers for its coverage (May 30, 2004): “you could almost sense epaulets sprouting on the shoulders of editors”. In my opinion, the coverage also damaged Russian-Swedish relations.

In the UK, most newspapers gave their coverage a light-hearted tone that played to Hollywood nostalgia for the thrill of the Cold War – “The hunt for reds in October”, “In scenes reminiscent of a Cold War thriller…”, “A mini-submarine hunted by a mini-navy” etc. Only The Telegraph and The Guardian (briefly) sent a correspondent to Stockholm, so coverage relied on official sources, but it was largely balanced and reflected the farcical aspects of some Swedish media coverage.

Recently there have been warnings about the consequences of an escalation in rhetoric on and about Russia. Henry Kissinger has warned of the threat of a new Cold War, and Vladimir Putin has given similar warnings. Is western media doing a satisfactory job in helping citizens to make sense and understand Russian politics and society?

Again there have been exceptions, such as the Financial Times’s Bruce Clark, whose 1995 book An Empire’s New Clothes: The End of Russia’s Liberal Dream, accurately and expediently analysed the dynamic of Yeltsin’s Russia and predicted the return of authoritarianism. His warnings were ignored.

But in general the English-language media have tended to act as cheer-leaders for Russian liberals or democrats, while ignoring the ultimately fatal damage these people’s policies did to both of these honourable political concepts – a position captured by FT journalist Chrystia Freeland in her Sale of the Century: Russia’s Wild Ride from Communism to Capitalism (2000). We also largely ignored the way in which liberal rhetoric masked a very illiberal policy to expand the Nato military alliance east in what was easy to portray inside Russia as bullying and aggression.

Therefore the – well-founded – media outrage at Russia’s annexation of Crimea seemed to most Russians to be hypocrisy, summed up in US Secretary of State John Kerry’s remark: “You just don’t invade another country on phony pretext in order to assert your interests,” delivered without irony as if the Iraq, Afghanistan and Libya invasions never happened.

Any statement by Henry Kissinger deserves to be treated in the same way as statements by Vladimir Putin.

Some Swedish media have demonstrated, unfortunately, by their coverage of the submarine hunt that they are happier resurrecting stereotypes of Russian aggressors than helping our countries to understand each other.

There is always a risk that political posturing, inaccurate information and stereotyping create a conflict where there need not necessarily be one. What advice would you give to other European journalists covering Russian affairs?

I have no special advice, and nor am I qualified to give any, so I would rather repeat the advice of Phillip Knightly, Sunday Times investigative reporter and author of the canonical history of war reporting The First Casualty (1975), to always assume that the military is trying to manipulate and control journalists in their own narrow interests. Truth is always the first casualty of war, and of preparations for war.

We need to avoid the default assumption that the Russians are wrong and “we” are right. Often both sides are equally mistaken, equally hypocritical, and equally deserving of rebuke.

Do you have any views on what a more constructive relationship between the EU and Russia might realistically look like? What steps are needed to achieve this?

A constructive relationship is impossible while western European governments are building up their arsenals and strengthening their militaries. For three decades we in the EU have enjoyed the illusion that our leaders are crusaders for liberalism and democracy, while ignoring the fact that our fluffy liberal facade relies heavily on American military might. “The hidden hand of the market will never work without a hidden fist”, said Thomas Friedman – we need to pay more attention to our own hidden fist while we (rightly) condemn the military brutality of the Russian state.

How important is the relationship with Russia (as a friend or enemy) to EU politics and the ongoing project of European identity construction?

It would be a tragedy if European identity came to be formed in opposition to and distinction from Russia. When Swedish golf fans root for Europe in the Ryder Cup, they are doing it because they feel part of Europe – they don’t need a Russian bogey-man to make them feel European. The Russian bogey-man is useful for some politicians who have an interest in masking the failure of western policies towards Russia, and who would like Europe to revert to the divisions of the Cold War period.

If the history of the last 30 years teaches us anything, it is that dictators come and go, and reporting their overthrow should be the ambition of every journalist. But the more militarised we become in the west, the easier Putin will find it to justify repression and militarisation in Russia.

Note: This article gives the views of the interviewee, and not the position of the Euro Crisis in the Press blog, nor of the London School of Economics.

David Crouch is a freelance reporter in Gothenburg, Sweden. He was previously deputy Europe news editor at the Financial Times. He occasionally contributes to The New York Times and The Guardian. He tweets at @davidgcrouch.

A Few Reflections on the Demonisation of Putin

This entry was posted in Europe, Interviews, Media, Russia, Sweden and tagged European identity, Gorbachev, media, media discourse, Putin, Russia, Russian Politics, Russian submarines, Sweden, Yeltsin. Bookmark the permalink.
We use cookies on this site to understand how you use our content, and to give you the best browsing experience. To accept cookies, click continue. To find out more about cookies and change your preferences, visit our Cookie Policy.