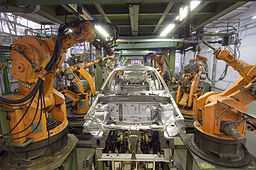 At a recent event held in London, ten start-ups were pitching their ideas for seed funding. This in itself is nothing out of the ordinary, as innumerable pitches by entrepreneurs are made every day across the world, especially these days, when start-ups are the new norm. But what makes this story more special is that these ten companies were showcasing their innovations to a group of Chinese investors. In his opening speech, Sun Wangsong, Deputy Director of China’s Investment Promotion Agency of Ministry of Commerce, mentioned that China is proactively turning itself from the “world’s factory” to a the creator of innovations-driven ideas. While we acknowledge the fact that investment has become a new credo, we find that despite a tremendous amount of capital being poured into R&D, the country has not been getting the results at the pace that it longed for. So, to accelerate this process, China has started to shop for new innovations abroad.

Can I upgrade from economy?

Even though China still accounts for the making of about 80% of the world’s air conditioners, 70% of mobile phones, and 60% of shoes, the country has been gradually shifting away from the role of manufacturing nation.[1] This is perhaps not surprising since labour costs have been rising continuously, so much so that companies are reallocating their production facilities to neighbouring Indonesia and Vietnam whose labour wages are only about 31% and 24%, respectively of that of China.[2]

But this is only part of the story. What is indeed less obvious is that while other Asian countries are busy competing for China’s manufacturing businesses, the country has already set itself on the path to engage higher value activities that offer better profit margins. This is one reason why the country has been deploying ever more robotics to increase efficiency as well as quality. Production efficiency and care for quality are often the first steps to fostering new innovations. Hence, robotics is a key indicator as to whether an industry is moving into higher value-added innovation-based activities. In 2013, China accounted for 25,000 of the 162,000 industrial robots sold worldwide, just slightly fewer than North America and Japan. Between 2005 and 2012, sales of industrial robots to the Chinese have increased by about 25 percent per year on average, making it the second-largest destination for industrial robots in 2012.[3]

Engaging higher value activities requires more than just lifting productivity; it also has to take on more innovations. While China as a country itself may not offer as fertile a ground for creating as the US (or even Japan, which consistently ranks high in terms of the business sophistication of its enterprises), the country’s domestic market offers certain advantages to fledgling companies.  As one of the largest consumer markets in the world, Chinese companies can thrive – or at least take off – without resorting to expanding abroad. The fairly culturally homogenous customer base also allows Chinese companies to offer large playing fields for new innovations and products. Just witness the stellar rise of Xiaomi. Unlike Lenovo and Huawei, this recent entrant into the mobile phone market does not have a huge patent portfolio. Even though their best handsets are not as good as Apple’s or Samsung’s best, the company still managed to thrive. Its recipe for success: offering products that are far better than other low cost competitors at half the price of an unsubsidised iPhone.[4] Looking at it differently, the company has managed to tap the general consumers’ desire for “value-for-money” products. And it gets even better: the huge domestic customer base is insulated from foreign competitors, which in turn would only further help the innovation, whether home-grown or adapted from aboard, to flourish within the country.

A new well of wishes: The super capital abundance of China

Based on its industrial might, China has already risen to prominence on the world economic stage. But it is very likely that it will leap into an even bigger role in the future as it sets to become a major capital provider in the world. For instance, China’s capital reserve balance – a dividend from the nation’s export-led growth – has expanded tenfold over the past decade to more than $2 trillion in 2010. Even more noteworthy is that the country is forecasted to add $87 trillion to the growth of total global financial assets by 2020, making The Middle Kingdom not just the biggest capital provider among emerging countries but both advanced and developing economies (see figure below).[5] 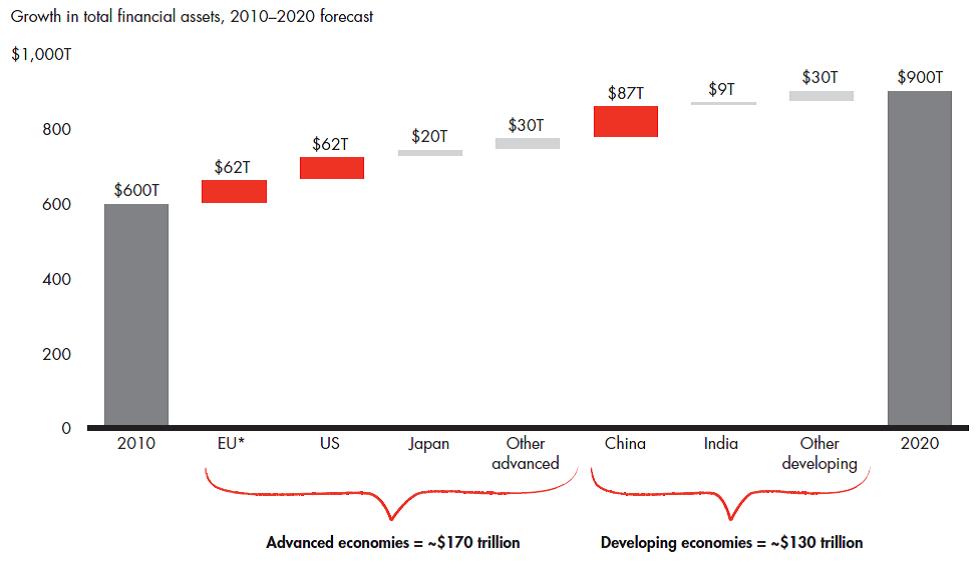 With its abundant supply of capital, the country is likely going to invest both domestically and abroad. This has perhaps already begun. Earlier this year, China’s government announced that it would set up venture capital funds worth $6.5 billion to support start-ups in emerging industries as its latest move to support the private sector and foster innovation. More of such systematic approach to overseas investments would likely follow.

At the same time, fledgling companies in Europe are often cash-strapped and deprived of the necessary capital to grow. This explains why Europe has many start-ups but only a few went on to prosper. Contrary to conventional belief though, this is not the result of a lack of money.  There is more money made available to the SMEs in Europe than in the US: in 2013, Europe is estimated to have provided €926 billion to SMEs, almost double that of US’s €571 billion. The shortage of credit has more to do with the fact that most of such funding comes in the form of banking lending[6]. And this is where European entrepreneurial dynamics are dampened.

As many banks in the EU are still repairing their balance sheets, they have become more cautious when lending. Higher cost of borrowing for SMEs subsequently ensues. At the same time, alternative sources of financing are under-developed in Europe. In 2013, it is estimated that €26 billion worth of venture capital was invested in the US, versus only €5 billion in Europe. Angel funding to the SMEs in the US was over the same period €20 billion, against €6 billion in Europe.[7] Shortage of risk capital and diversity of funding sources have therefore hampered the promotion of innovation in Europe. At this rate, fledging start-ups would sooner or later turn to investors outside of Europe, or leave it all together. This would then lead to an innovation and cultural drought, which would exacerbate the current decline.

One of the most urgent yet unresolved issues in the current Eurozone crisis is that young people are not able to find jobs. This often has little to do with how educated they are – there are just not enough jobs around. In Spain alone, for instance, some 39 percent of youth aged 25-34 hold university degrees. But with jobs in short supply, many graduates end up taking up lower skilled jobs abroad. While governments in the EU are investing substantial amount in education, their economies, in turn, often cannot reap the benefits of such investments. Effectively, countries like Spain are spending money to educate workers abroad. And it is not the only country doing this. Many southern European countries carry similar poor statistics on youth unemployment and share the same destiny in terms of brain drain.

There appears to be a parallel between this and innovations in Europe. Many of its governments are actively promoting innovations, often through specially designed policies as well as financial incentives such as tax credit. This is certainly commendable. Yet, lack of financing or access to capital could eventually push many start-ups to turn to investors aboard if they are to avoid failure. Just like spending money to train labours aboard, governments seem to be pouring money to help innovative companies stand on their feet, only to see them leaving for overseas.

This of course is nothing new. Many European entrepreneurs who succeeded in their early stages went to the US to seek further funding and growth capital. Yet, if China – along with other countries – is set to become a prominent capital provider in the years to come, we will likely see even more of innovations leaving Europe and landing on Chinese soil.

Innovations are crucial to raising productivity, which subsequently improves competitiveness, social progress and, ultimately, our standards of living. But their success is the direct result of how much and how many different types of financing are available to them. Innovations would therefore most likely travel to those places where capital is made available to them, thereby raising the competitiveness of these places at the expense of Europe’s. With China set to play a greater role as capital provider in the future, expect to see many more of the kind of event that took place in London, right across the globe.

[6] “Bridging the Gap: Investor Views on Europe and US Capital Markets and How They Drive Investment and Economic Growth”, Association for Financial Markets in Europe, February

[7] “Bridging the Gap: Investor Views on Europe and US Capital Markets and How They Drive Investment and Economic Growth”, Association for Financial Markets in Europe, February

Youth Unemployment: A Crisis on Top of Another Crisis

This entry was posted in Europe and tagged China, education, Europe, European business, innovation, start-ups, unemployment, youth unemployment. Bookmark the permalink.
We use cookies on this site to understand how you use our content, and to give you the best browsing experience. To accept cookies, click continue. To find out more about cookies and change your preferences, visit our Cookie Policy.