It is easy to blame the yes campaign but hard to account for its 38.69 per cent in a snap referendum framed as foregone conclusion

In the early morning hours of Saturday June 27, Greek TV programmes were interrupted by an address of the Prime Minister. Alexis Tsipras had announced the abrupt end of the country’s negotiations with the institutions and asked for a popular vote on the latest proposal on the negotiating table, which he framed as an “unacceptable ultimatum”. Within a couple of hours a run on bank ATMs broke out, prompting the government to impose a bank holiday on 28 June.

For political analysts a potential plebiscite that would be held in a state of financial emergency posed an extraordinary case. For the economy of this essay, three aspects deserve more explanation. 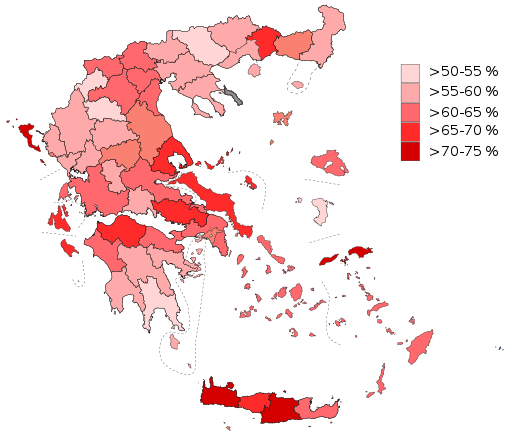 First, there are several irregularities surrounding the first referendum to be held in Greece since 1974. Hardly ever has an EU member state held a referendum allowing only a five day campaign period. Legal opinion was divided, with constitutional lawyers stressing that the Greek constitution forbids a referendum on monetary issues. The Secretary of the Council of Europe also suggested that holding a snap referendum was falling short of international standards. Most crucially, there was ambiguity from the government on the definitiveness of the decision to hold a referendum adding up to the confusion of the public, the media and opposition groups. The Greek Council of State following an appeal, only deemed the referendum constitutional on Friday the 3rd of June.

Second, the referendum was framed by government officials as a part of an ongoing negotiation and a tool that could be revoked. The Greek authorities opted for a confusing question, urging citizens to reject a staff level document that had been presented by the institutions and placed the no choice above the yes. This prompted a response of EU officials most notably the president of the Commission Jean Claude Juncker who stressed that the proposal was no longer on the table and that negotiations with the Greek government had stopped, pending the result of the referendum. He also advised Greek people to vote Yes as a way of securing a better agreement.

Third, trivialisation of democracy has been the end result of populist responses to what is perceived as a “democratic deficit” both domestically and at EU level. The view that a populist plebiscitary conversion of democracy weakens the legitimacy of political institutions such as the Parliament and technocratic bodies such as Central Banks, which are considered essential for good governance, has been corroborated in Greece. The Bank of Greece has been the target of witch-hunting in select parliamentary committees.

Syriza popularity has grown at the expense of both subnational and supranational democracy as it has been at the neglect of painful economic decisions. This is something international apologists of Greek ethnocentrism shied away from recognising. The reality of Multi-level governance in the EU with the multitude of interactions between local, regional, national and EU territorial levels as well as cross-border network ties have all been sidelined. This very narrow, unilateral and anti-European version of democracy offers nothing more than a call for an outright rejection of both EU institutions and transnational collaboration. At the same time it neglects local democracy. Surprisingly, nothing is explained about what would the socio-economic situation in Greece be following a Grexit apart from magical reassurances about a small period of hardship.

The No camp appeared to attract the oddest of bedfellows abroad. These included economists seeking ideological fulfillment of bleak prophesies on the European monetary union (Krugman), proponents of a shock doctrine of Grexit (Sachs), and persistent detractors of Greece’s euro area membership (Sinn). Other centrifugal forces rejoiced at the announcement including extremists and populists of all shapes and origins such as the National Front, Ukip, and M5S. Greece’s referendum and default on the IMF payment due June 30 was also welcomed twice by Venezuelan president Nicolas Maduro, while Bolivian president Morales, Argentina’s Kirchner and Cuba’s ex-leader Fidel Castro congratulated the Greek government on the result.

Eurosceptics have been deliberately misreading the domestic forces behind the Yes vote. The Yes campaign was been nurtured as a civic movement comprising civil society organisations, city and regional actors as well as pro-EU businesses and individuals. Much of it came as an instinctive reaction to the Syriza-Anel government experimentation with democratic centralism and illiberal, radical visions of democracy. Government policy has deprived Greece’s cities and regions of even the minimum of funding for their operation costs let alone their regional and local economic development functions. Not surprisingly, Athens mayor Kaminis and the Central Union of Municipalities proved ardent supporters of the Yes campaign.

Besides, the strength of the political forces supporting the Yes vote has been exaggerated. Pro-Europeanist parties (ND, To Potami and Pasok) started campaigning from a very low basis (30.5% for ND-Pasok-Potami against 58% for Syriza-Anel-Golden Dawn) in the midst of financial, existential and leadership crisis that has been beleaguering the political centre in Greece since 2012. Endorsement of Yes by unpopular but key ND figures was instrumentalised by the No camp as a return to the ancien régime far beyond what their actual involvement would attest.

Two key aspects of the No landslide of 61.31% has been the tactical alliances and political communication tactics employed by Syriza. The electoral rapprochement on the referendum with the neo-nazi Golden Dawn was based on the Syriza transition from a pluralistic populism of social/societal protest to an identity national populist cleavage “we vs. the others”. The only positive reading of this could be the assimilation of voters from a violent ultranational extremism to a national populist alternative. Besides, inaccurate polling data that predicted a too close to call result forced the Syriza campaign to overcompensate. Thus a wave of rhetorical assaults inciting anti-media, anti-EU and anti-established parties sentiment was launched in the public sphere.

An excessive use of televised addresses by Tsipras was made after Saturday’s surprise announcement. The second one was geared at shifting the blame for the bank holiday to Greece’s creditors and providing reassurances with regard to wages, salaries, pensions and deposits (01.07.2015). The third one aimed at interpreting an IMF debt sustainability analysis report as a vindication of government intransigence and insistence on debt relief although the report pointed at recent policy changes (including those under Syriza-Anel) for rendering debt dynamics unsustainable. In his pre-election last TV appearance on Friday 3 July, Tsipras called for “silencing the sirens of scaremongering and disaster” and gave soothing reassurances to panicked audiences that “nobody questions the presence of the country in the Euro”. In parallel, the referendum dilemma was rephrased as “moving towards the slow death of the economy and immiseration if we impose more cuts on pensions in order to repay an unsustainable debt or if we reinforce our decisiveness to give a final end to the five years of disaster”.

The referendum has been an attempt to borrow time, consolidate Tsipras’s hold of power and Syriza’s position in the disjoined Greek party system. Despite Tsipras’s magical interpretation of the No vote as a pro-European verdict, pressure is mounting for a deal that would prevent the dismemberment of the Euro area. Now the real radical choice would be to strengthen ties that bind the Greeks with Europe and ensure their fundamental European freedoms as well as social cohesion, political stability and economic recovery in Greece.

Eleftherios Antonopoulos is a researcher on EU Governance and politics. He holds a PhD in European Public Policy from the University of Strathclyde in Glasgow and an MSc in European Politics and Governance from the London School of Economics and Political Science. Follow him on Twitter at @lefterisa2

Deal or no deal? Parameters of a decision

3 Responses to The Greek Referendum: Popular Verdict or Foregone Conclusion?