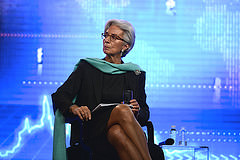 Stephanie J. Rickard is an Associate Professor of Political Science at the London School of Economics in the Department of Government.