Posted on September 21, 2015 by Eurocrisis in the Press 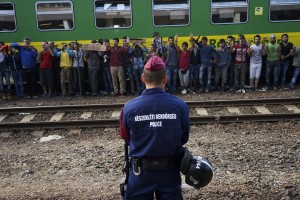 The recent refugee crisis in Europe has been an embarrassing and damaging episode for the EU, which prides itself on its humanitarian credentials.  The awful and tragic image of the little boy Alan Kurdi that went viral across social media initially jolted European consciences and spurred a host of action and U-turns on the part of some countries. Most notable of these was Germany, which took in 100,000 refugees in August and pledged to increase its spending by €6bn to handle an expected total of 800,000.   German citizens complemented their government’s policy by standing in stations, ports and football stadia, holding up signs of “Refugees welcome”; some families offered refugees a place to stay in their homes.  France pledged to receive 24,000 refugees over the next two years.  The UK, meanwhile, having previously refused to receive any refugees from Syria, agreed to receive 20,000 Syrian refugees over the next five years.

This change in heart by some European states, such as the UK, was only prompted by public outrage, particularly after the photograph of young Alan was published.  Prior to that, however, the refugee crisis was no less urgent or desperate.  For weeks, the anger and frustration had been spilling over into confrontation between migrants and border police at Calais in France. French and British citizens attempted to show solidarity with the migrants, most of whom were refugees and asylum seekers, by providing food, clothing and tents, often to be stopped by the authorities on the pretext that such activities would only ‘encourage’ greater flows of migration.  In Hungary, Keleti train station has become a makeshift camp for hundreds of beleaguered refugees; on several occasions they were duped into boarding a train that they thought would take them to Austria, only to be transported to a remote Hungarian detention centre.

Despite the rise in interest and generosity displayed by Europe’s governments and public, the refugees’ plight remains dire.  Just this week disturbing footage emerged of refugees, including children, being beaten by riot police stationed on the Hungarian border.  Similar stories of border police overwhelmed by the crisis have been mirrored elsewhere in Europe.  Even Germany now appears to be taking a step back from its initial generosity, closing its borders in the face of increasing political pressure, and triggering similar responses by Austria, Slovakia and the Netherlands in contradiction of the Schengen agreement allowing freedom of movement.

In the midst of the crisis, families have been split up; lack of food, shelter, clean clothes, or safety, blights those who have already had to flee from conflict and torture; many have been forced to turn back. The father of Alan and Galip Kurdi, for example, had already escaped Assad’s torture cells in Damascus, then driven out again by ISIS in the North, before he tried to make the disastrous boat-trip with his family across the Aegean to Greece.  The young boys and their mother were just three of many hundreds who have perished attempting to make the sea-crossing.  200 are estimated to have died in a boat that capsized in August this year; a boat carrying 700 people and another carrying 400 people capsized in April; the UN refugee agency has estimated 2500 people have died this year alone trying to make the crossing. The cases mentioned here only made the headlines because the numbers were so large – but many smaller boats disappear without any media attention. 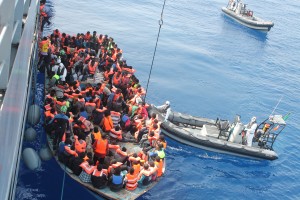 Evidently the large numbers of refugees attempting to enter Europe, as well as the number of fatalities, is not a new phenomenon despite the flurry of public and media attention in recent weeks; rather it has been the somber backdrop to the Mediterranean for the past 18 months.  The reasons for this trend are to some extent outside the EU’s control.  The push factors are apparent: devastating conflict in Syria, whose civilians constitute the overwhelming majority of the refugees, but also war and political instability in Eritrea, Afghanistan, Nigeria, Somalia, and North and South Sudan have led to a global rise in displaced people, the worst on record since the Second World War.  Most of these refugees have already sought refuge in neighbouring countries: Lebanon, for example, a fifth of the UK’s size, has already taken in over 1.1 million Syrian refugees, in addition to the existing Palestinian refugee population in the country.  Refugees now make up a fifth of the population in Lebanon. It is a similar story in Turkey, which has received more refugees than any other country (over 1.9 million refugees), Jordan (over 628,000 refugees) and Iraq (248,503).  Gulf States have come in for scrutiny and criticism for not doing more, most are not signatories to the UN convention on refugees – although in the past week Saudi Arabia has claimed in its defence that it has provided shelter to 100,000 Syrians and provided millions of dollars in aid.  It should be noted that almost all these countries have deep socio-economic and political problems of their own – the basic hospitality of neighbouring countries, though strained, has in most cases not been in short supply.

The spotlight then falls on Europe. It is notable that the EU is one of the largest donors of refugee aid in the world; however, with refugee resettlement it has fared poorly.  European countries collectively have taken in far fewer refugees in comparison with those listed above, particularly in proportion to their size and relative wealth.  This despite the EU’s commitment to support the Middle East and North Africa in ‘soft security’ issues, as laid out in its European Neighbourhood Policy and the renewed Euro-Mediterranean Partnership.  Support for refugees would typically fall under its humanitarian remit, and yet most EU member-states have been slow to come forward with substantial aid or to open up borders to receive refugees.  A wide discrepancy has emerged between member state contributions in aid and resettlement, with some member-states like Germany and Sweden volunteering to receive thousands of refugees, while others such as Denmark and Slovakia are resistant to taking any (although Slovakia stated it would be willing to make an exception for Syria’s Christian refugees).  This has highlighted a structural incongruence at the EU when it comes to issues such as refugee resettlement. The EU might agree on policies and norms at the institutional level, but when it comes to implementation it is almost impossible for Brussels to impose those norms in the face of national resistance, or unequal resources and capacity across member states.

What then stands in the way of a more harmonised and constructive European strategy towards the global increase in refugees?  Since the financial crisis, Europe’s economic resources have of course been depleted.  Welfare, defence and overseas budgets have been substantially cut as governments across Europe have put in place austerity programmes.  This in turn has had a knock-on effect in humanitarian provision for refugees. However, there has also been a political and cultural shift towards a more exclusive, hostile brand of nationalism across Europe.  Right wing groups of varying extremes, old and newly formed, have seen a rise in public support: UKIP in the UK, Golden Dawn in Greece, Jobbik in Hungary, the NPD in Germany and the Danish People’s Party are just a few of those gaining attention in elections. Mutual trust and consensus between member states has also broken down as states look inward and blame one another for exploiting collective resources and ‘not pulling their weight’.  Europeans have been in no mood to show hospitality towards each other, let alone to those further ashore.

In the midst of such trends there has been a concurrent rise in the ‘politics of fear’, chiefly targeting racial and cultural diversity.  Even prior to the deadly attacks on the Charlie Hebdo headquarters in Paris, various commentators and even ‘mainstream’ politicians denounced multiculturalism, while laws have been passed to inhibit the visibility of religious difference.  The discourse has become more and more polarised, less restrained, and in some cases reflected a dereliction of responsibility in the pursuit of free speech.  An unavoidable connection exists between the increased intolerance towards difference within European society, and a lack of hospitality towards refugees.

The fervent political and public opposition towards any form of immigration has produced one of the most controversial policies to be adopted by the EU: since October 2014, Europe ended its ‘Mare Nostrum’ search and rescue operations in the Mediterranean, which saved around 100,000 lives a year.  The stark logic of this policy is to allow a few, or as it happens many, hundreds of migrants and refugees to perish in order to deter other would-be migrants from attempting entry. The fallacy of such a policy is that it assumes the migrants are leaving their home countries out of choice, and underestimates their desperation; tragically it has not stopped people from making the hazardous journey, and the numbers of people drowning has only increased.  To treat the thousands of migrant deaths at sea as ‘ accidents’, as is often the case in political and media discourse, overlooks the political agency of the EU that enables this crisis to exist in the first place, but which also has the capacity to alter policy and possibly save thousands of lives.

The refugee crisis is not only a material and logistical one, but reflects the need for a deeper discussion about the EU’s ethical responsibilities and indeed Europe’s identity.  Does Europe have a moral duty to open its borders to those in desperate need of safe haven?  Moreover, can Europe offer long-term meaningful hospitality to those they receive, beyond just opening their borders?  To do so political leaders and governments must have the courage to challenge the prevailing hostile discourse on refugees and migrants, which in some cases they helped to create; ordinary citizens too, would need to produce a momentum of public opinion – such as the recent solidarity protests in London and across the UK– to convince their governments, that refugees are indeed welcome.

Dr Jasmine Gani is a Lecturer in International Relations at the University of St Andrews, Scotland. Her latest book is The Role of Ideology in Syrian-US Relations: Conflict and Cooperation, (Palgrave-Macmillan, 2014)

5 Responses to Can the EU be hospitable?