A view from Europe’s borderland: As Europe vows stricter border controls, what’s at stake at the border?

Posted on February 23, 2016 by Eurocrisis in the Press

Six months is a long time in politics and this includes humanitarian politics in Europe. ‘Refugees welcome here’ (#Refugeeswelcomehere) was a catchphrase reflecting widespread sentiments and political will in Europe last summer and early autumn – a warm welcome to the first waves of arrivals from war-torn zones. Few months later 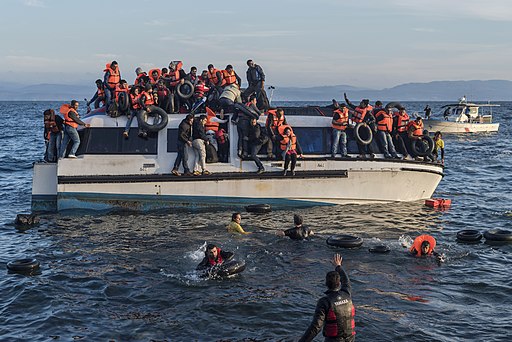 and with Europe’s eastern neighbourhood no less torn, refugees are still arriving at Greek shores. Yet the politics of reception is now very different. In January, Greece was officially threatened with exclusion from EU’s Schengen zone for not properly safeguarding its borders. Only days earlier, European and Greek legislation made it possible to prosecute locals and volunteers who help refugees and migrants in the water and on arrival. Some, like a group of Greek activists in Chios, and another group of Spanish lifeguards and Muslim Danes helping refugees out of a stranded dinghy in Lesvos, have already been arrested facing charges of trafficking. Is Europe’s 2015 ecstatic humanitarianism a distant memory? As Europe’s current ‘migrant crisis’ enters a new phase, many complexities and contradictions in the politics that surround it become apparent. One of them, is the significant distance between what goes on at Europe’s borderland and point of refugee arrival, on the one hand, and the heart of Europe where decisions are being made, on the other.

With high level decisions about refugees making headlines across Europe, what actually happens at the borderland receives less and less attention. But the stories of the border reveal many challenges and risks associated with the decisions being made. In December 2015, Lilie Chouliaraki and I conducted a study of the networks of solidarity in the island of Chios. Chios is one of the Greek islands with almost daily arrivals of hundreds of people from the Turkish shores. Only about half an hour away by boat but a 2-6 hours travel in a dinghy, Chios is Europe’s borderland. While on the island, we observed the signs of a changing European policy of reception: from the erection of a new ‘hotspot’ for refugees’ and migrants’ registration far away from the city and surrounded by fences, to the arrival of a large Frontex border force outnumbering the small local police that led migrant registration at the time. Alongside these changes, we observed the invisible to most Europeans but crucial act of solidarity. Having the opportunity to get to know the inhabitants of a fishing village where dinghies arrive almost every day, as well as the volunteers of a collective kitchen regularly preparing warm meals for migrants and refugees, we saw another side of ‘the crisis’.

The, mostly retired, inhabitants of the fishing village of Ayia Ermioni, have set up a makeshift but effective reception point for the regular arrivals of dozens, sometimes hundreds, of people of all ages. With incredible effectiveness, usually no more than a handful of locals offer water, milk, biscuits, and, importantly, dry clothes to all those coming out of the sea. The inhabitants of Ayia Ermioni also keep their eyes open for stranded boats in the sea or any crashing at rocky shores. Sometimes they do it consecutively for 16 hours – as long as it’s needed, as long as dinghies arrive, as Dimitris, one of the locals, tells us. The volunteers of the collective kitchen have mastered another exceptionally effective mechanism of support, preparing 500-700 portions of warm food a day. In shifts of approximately 10 at a time, the volunteers prepare the meals – usually lentils or pasta dishes – during their work breaks and deliver them after work, directly to migrants and refugees. In an island with an extensive network of INGOs coordinated by the UNHCR, only small groups of volunteers offer warm, cooked food to the new arrivals. ‘There is something deeply human in being able to have and to share a warm meal’, says Vicky, one of the volunteers.

People like Dimitris and Vicky now face an everyday risk of arrest and prosecution with charges of smuggling and trafficking. As mentioned earlier, according to new legislation, officially introduced by the Greek government on the 28th of January, all volunteers need to register with the police and be evaluated and approved. If not registered and/or approved, as it happened in the case of the Spanish lifeguards and Danish Muslim volunteers, they might face prosecution. This piece of legislation is only one of the recent measures taken to increase control of the border and of new arrivals. The country is still deemed ‘ineffective’ in guarding its borders, with politicians across Europe demanding from Greece to use its navy more efficiently to stop more people from coming.

Medicins Sans Frontiers’ recent report has already highlighted that Europe’s policies have been a ‘catastrophic failure’: not only have they collectively failed to address the crisis, but ‘these policies of deterrence along with their chaotic response to the humanitarian needs of those who flee actively worsened the conditions of thousands of vulnerable men, women and children’. In a very different context, the artist Jason de Caires Taylor has just revealed his extraordinary sculptures of drowned refugees at the first underwater museum off Lanzarote’s coast. One of his most moving works, is ‘the raft of Lampedusa’, reminding us of one of the possible outcomes of dinghies that don’t make it to the shore. Art, and reports, more than newspaper headlines, are striking reminders of what is actually at stake. And what is at stake might indeed be safe borders. But it is certainly much more than that.

Myria Georgiou teaches at the Dept of Media and Communications, LSE. Her research focusses on migration, diaspora, and the city, especially in examining the ways in which media and communications shape narratives and experiences of belonging among mobile and diverse populations.

This entry was posted in Greece, Migration and tagged EU, Greece, refugees. Bookmark the permalink.

2 Responses to A view from Europe’s borderland: As Europe vows stricter border controls, what’s at stake at the border?