Posted on February 25, 2016 by Eurocrisis in the Press 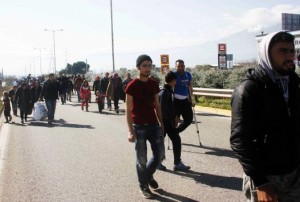 Last Wednesday, Vienna hosted a meeting of Balkan countries involving Albania, Bosnia, Croatia, Kosovo, FYROM, Montenegro, Serbia, and Slovenia in divisive move that deliberately excluded the Greek government from decisions concerning the tackling of the mounting refugee crisis in Europe’s borders. On Monday, FYROM had already previously decided to deny entry to Afghan migrants and restricted access to Syrians and Iraqis. Greek authorities summoned the Austrian ambassador to protest against the Vienna meeting, which they described as a ‘unilateral move which is not at all friendly toward our country’. The day after the meeting, the Greek Prime Minister proclaimed that Greece will not be turned into a ‘warehouse of souls’ and just today, in an unprecedented move, he recalled the Greek ambassador in Vienna. In the meantime, the situation in Greece is rapidly spiraling out of hand. The images of desperate refugees roaming the Greek highways and heading for Greece’s northern borders are shocking suggesting that the situation might soon become unmanageable.

What Europe has witnessed the past few days on a diplomatic level is simply the first serious shocks of a long-brewing crisis that has its origins in a complicated series of diplomatic failures and mismanagement by some and deliberate war-mongering by others. Europe is paying a hard price for something she didn’t directly cause, yet nevertheless tolerated, as part of a ruthless geopolitical game that has its epicenter in the Syrian crisis and the broader Middle East antagonisms. The civil war in Syria broke out, and was portrayed as such by Western media, as a rebellion against the oppression and brutality of the Assad regime. What of course was never openly admitted (but is nevertheless a common secret) was that this is a war that some of the major players in the region -the US, Israel, Turkey and Saudi Arabia- not only welcomed but in varying degrees deliberately fomented in an effort to dismantle the Hezbollah-Syria-Iran axis due to which Israel paid a heavy price in the 2006 war in Lebanon. Russia’s active involvement in the conflict last October with the commencement of the bombing campaign was rightly perceived by many as an effort to tilt the balance in favour of the crumbling Assad regime. Yet, apart from restoring the internal dynamics of the conflict, it was also a move that served wider Russian objectives. The continuation of the Syrian civil war causes internal division among EU members as the flow of Syrian refugees wreaks havoc in the European borders and keeps Europe in disarray. EU’s weakening status as a diplomatic power is not a meager gain for Russia as it finds itself less pressured on the Ukrainian front and makes Europeans more pliable to Russian demands.

On the other hand, as long as the conflict keeps Hezbollah’s forces occupied, the Syrian regime weak and Russia overextended, the US, Saudi Arabia and Israel are also content with the continuation of the Syrian conflict which means that any prospect for a resolution of the root cause of the refugee crisis is not on the map. That also partly explains the vehemence and lack of diplomatic etiquette in the European member states’ reactions. They are very well aware that the ‘hot potato’ is dropped on their front door while they themselves have no real say in the resolution of the conflict apart from the management of its consequences. In other words, Europe is hopelessly toothless in a geopolitical crisis in which it absorbs most of the heat. As a result, the dramatic events that were unleashed since last summer (when the influx of refugees through the Greek borders took unprecedented dimensions) have not only revealed the cracks and fissures in Europe’s integration experiment. It has also exposed the hypocrisy at the roots of Europe’s so-called soft power: its alleged humanitarian sensitivity and the values of hospitality, tolerance, openness and cosmopolitan solidarity that have routinely inspired and decorated its official declarations.

Apart from being highly volatile and unpredictable as a whole, the ongoing crisis is also imminently threatening the Eurozone’s stability. The Greek government is currently under assessment according to the terms of the 3rd bail-out agreement and it seems once more unable or unwilling to deliver. Europe’s patience with successive Greek governments has been very generous, partly due to geopolitical reasons, but it is gradually becoming common knowledge that the Greek situation is probably unsolvable within the Euro. Given the enormous pressure that the refugee crisis is going to exert on European societies in the immediate future it is doubtful whether further tolerance and further fiscal injections are going to be extended to Greece in the near future. What would result from a Grexit at this juncture is relatively unpredictable although it is certain that the Americans are expected to do their best to prevent it. The difference this time is that in view of the future cost of adjustments involved in the tackling of the refugee crisis it might prove tougher, if not impossible, to convince Germany to keep carrying the bill of an insubordinate and erratic member (either by turning a blind eye to the current assessment or agreeing to a 4th bail-out programme). The glooming prospect of a Greek state geopolitical collapse is not an entirely unlikely scenario if immediate steps are not taken to interrupt or ease the flow of refugees at the Greek-Turkish borders in the Aegean.

The current situation, there, is however even further complicated by Turkey’s adventurous foreign policy trying to extract geopolitical gains from NATO’s recent involvement. Apart from her dubious role in the Syrian conflict, Turkey has actively pursued an exploitative tactic in the negotiations for limiting current migration flows in the Aegean. The EU strategic objective was to cajole Turkey into actively curbing migration flows by offering a generous international monitoring scheme. Turkey has managed to turn her involvement into an opportunity to promote her long-term geopolitical aims in the Aegean. After stalling the operation of the recently mandated NATO mission, Turkey insisted that the latter should not operate in the southern Aegean: ‘Turkey disputes the sea border between its southern coast and the Dodecanese islands in Greece, hence it wants to avoid this border being implicitly recognised in the operational plan of a NATO mission’. As a result, it is highly improbable that immigration flows will be seriously diverted or reduced since the current state of affairs is serving Turkish interests on multiple fronts (or at least so Erdogan seems to believe): by recording Turkish demands in the border dispute with Greece and by putting pressure on the European Union and the US to intervene in Syria in favour of Turkey’s strategic interests and abandon their Kurdish allies who are by the way the only forces seriously opposing ISIS in northern Syria.

If all this sounds crazy, cynical and unimaginably entangled, welcome to the international politics of the 21st century. Unlike what Fukuyama had predicted in the idyllic ambiance of the early ‘90s, history is not only back but viciously upon us.

A view from Europe’s borderland: As Europe vows stricter border controls, what’s at stake at the border?

This entry was posted in Europe, Greece, Migration, Turkey, Vassilis Paipais and tagged immigration, NATO, refugee crisis, Russia, Syria, Syrian refugees. Bookmark the permalink.
We use cookies on this site to understand how you use our content, and to give you the best browsing experience. To accept cookies, click continue. To find out more about cookies and change your preferences, visit our Cookie Policy.