A review of Nathalie Tocci’s ‘Framing the EU Global Strategy’

Posted on December 12, 2017 by Eurocrisis in the Press 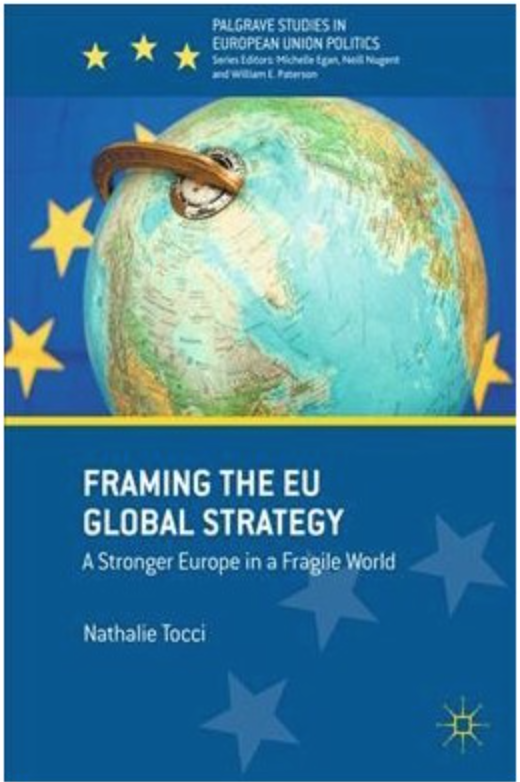 During the referendum on British membership of the European Union, one of the many charges against the European Union put forward by the leave campaign was fear of a European army. There has also been talk of an emerging European ‘security-industrial complex’ as a range of surveillance systems are introduced as part of EU counter-terror measures and as defence research and defence co-operation are stepped up (see Chris Jones, OpenDemocracy, 31 August 2017). But the situation is much more complex and contradictory than these negative depictions suggest. It is important that those of us who still believe in ‘normative Europe’ – the idea of the European Union as a peace and human rights project – understand these contradictions and the possibilities they open up for a more transformational agenda.

Nathalie Tocci’s book is a useful corrective to the more pessimistic portrayals of current developments within the European Union. Tocci is Director of the Italian Institute for International Affairs and advisor to Federica Mogherini, the High Representative for Common Foreign and Security Policy and Vice President of the European Commission. She was tasked with drafting two documents – an initial statement of the strategic context facing the EU, presented to the European Council in June 2015, entitled ‘The European Union in a Changing Global Environment: A More Connected, Contested and Complex World’ , which paved the way for a European strategy document, presented to the European Council the day after the Brexit vote, entitled ‘Shared Vision, Common Action: A Stronger Europe. A Global Strategy for the European Union’s Foreign and Security Policy’ (EUGS).

The book offers a fascinating insight into how these collective documents are produced, even though both  documents are unusual in that they both involved greater public consultation than normally happens while at the same time, probably owing to the deft steerage of both Mogherini and Tocci, they both manage to be coherent and readable. The book also provides a guide to reading the global strategy and an explanation of some of the concepts developed in the document, and gives some indication of what has happened since in terms of implementation.

The book starts by contrasting the European Security Strategy (ESS) produced when Javier Solana was High Representative entitled ‘A Secure Europe in a Better World’ that was approved by the European Council in December 2003. First of all, the EUGS is a global strategy not a security strategy even though, of course, it includes security. It is global not only in the sense of encompassing EU relations with the whole world but also in the sense of bringing together a whole range of instruments. Mogherini, like Cathy Ashton before her, is double hatted. She represents both the European Council, composed of member states where the main instruments are defence and diplomacy, and the European Commission, where the instruments are much broader including aid, development policy, conditionality, dialogue, humanitarian assistance, support for civil society, research and education, transport and so on –all necessary 21 st century elements of a global strategy.  Secondly, the ESS is a strategic vision rather than an actionable policy document. The policy options were much easier for Solana in the early 2000s, so he was keen to get agreement on the overall direction of ESDP rather than specific policies, which might have diluted and complicated the document. The global strategy as can be seen from its website has become a policy framework for Mogherini and her team. Thirdly, and most importantly, the international context has utterly changed. The ESS was drafted in a mood of optimism about the international liberal order despite the US invasion of Iraq earlier that year. Indeed it was a European response to the invasion – an attempt to overcome the cleavage created by the support of some countries for the invasion (most notably the UK and Spain). It represented a contrast to the US National Security Strategy published that year, which made the case for pre-emptive defence (the illegal grounds on which the invasion was justified) and counter-proliferation as a new militaristic approach to the spread of nuclear weapons; the ESS counterposed ‘preventive engagement’ and the most successful example of that were the negotiations with Iran initiated by Solana but completed under Cathy Ashton. The situation facing the EU in 2015 was very different and about to get worse. There were internal cleavages over the Euro, over refugees and migrants and over the aggressive role of Russia; and far from moving towards a liberal international order, the EU faces worsening violence and disorder in its Southern neighbourhood, especially Syria, Libya, Mali, Somalia, DRC, S. Sudan, Yemen and more; growing reversals of democratic achievements especially in Turkey and Egypt; not to mention growing geopolitical rivalries as well as poverty and deprivation, climate change, and transnational crime.

The aim of the EUGS was to preserve the transformational agenda of the ESS while being realistic about the context. The title of Tocci’s book ‘A Stronger Europe in a Fragile World’ was initially planned as the title of EUGS, deliberately playing on the title of the ESS ‘ A More Secure Europe in a Better World’. The term used to express this ambition is ‘principled pragmatism’. Tocci explains this in terms of a ‘pragmatic philosophy’ that ‘looks at the world as it is and not as it [the EU] would like to see it …… that entails a rejection of universal truths, an emphasis on the practical consequences of acts and a focus on local practices and dynamics……In doing so, however, the Union should not fall into the trap of cultural relativism. EU pragmatism should be principled. While different pathways, recipes and models are to be embraced, international law and its underlying norms should be the benchmark of what is acceptable to the EU and what is not.’ Loc 1314

In terms of content, the EUGS is divided into four sections: interests, principles, priorities and ‘from vision to action’. Some argued that it ought to begin with values rather than interests, but as Tocci points out, any constructivist understands that interests and values are much the same. ‘Our interests and our values go hand in hand. We have an interest in promoting our values in the world. At the same time our fundamental values are embedded in our interests.’ Interests, as laid out in the EUGS  include security, prosperity, democracy, and a rules-based global order. As Tocci points out, the fourth is necessary for the first three: ‘When walls and fences are built to keep away refugees in search of protection in the EU, the moral blow to our internal democratic system is incalculable.’ Principles include engagement, responsibility, unity and partnership. Priorities include security; the resilience of states and societies in the East and South; an integrated approach to conflicts and crises; cooperative regional orders; and global governance for the 21st century. The last part of the EUGS contains concrete proposals for a more credible, responsive and joined-up union.

In terms of implementation, it is the defence and security part and the conflict and crises part that has, in the jargon, been actioned. In the case of defence and security, this is where  the critics get nervous. The reason for the prioritisation of security is partly public opinion. Eurobarometer figures show that public support for European security is greater than any other area even in the UK. But another reason is Brexit. Although the European Security and Defence Policy (ESDP) was originally propelled forward by Franco-British cooperation in the Blair years, Conservative governments have acted as a brake on European security co-operation since they favour NATO. Now without the UK, the Commission has been able to produce a European Defence Action Plan and is providing financial incentives for developing joint defence capabilities (funding would be exempt from the Stability and Growth pact, eg austerity constraints) and is supporting defence research projects.

But what is proposed for European defence is very different from classic national and Nato defence, and this has to be understood. National and Nato defence are about defending borders from geo-political threats; they are about planning for the next war. European defence, as stated in EUGS is about external crisis response – peace-keeping for example, building the security and defence capabilities of partners, and about the protection of the Union and its citizens. This is about citizens rather than territory – it is about the cross-over between  internal and external security and about new issues like cyber security,  terrorism, or the protection of critical infrastructure. It is more about policing and intelligence than tanks and aircraft.

In other words European defence and security policy does not consist of a European army. It involves a different combination of capabilities designed for situations other than  classic inter-state war. It is an expression of the EU as a new kind of polity, not a super state in the making but a regional organisation aimed at preserving the advantages of trans-European society by extending those advantages outwards. Of course there are some inconsistent elements in the EUGS, the geographical reasoning from which, as Tocci explains, it was so difficult to escape, for example.

And of course, Mogherini faces huge obstacles. Many member states are moving in opposite directions, building walls and fences and dismantling the machinery of rights. The traditional defence industries are keen to get in on the act and may impose their own trajectories on defence co-operation. The whole migrant response has constructed a self-reproducing border industry, counter-terror imperatives are leading to terrifying degrees of surveillance, although it must be pointed out that EU cyber security policy  emphasises human rights and privacy in contrast to national policies. But a reading of Tocci’s  book demonstrates the earnestness of the collective effort involved in the EUGS to lay out a new kind of 21st century approach to peace and security.

One final comment. The EUGS was steered through by two powerful women. I am left with the question what role gender played, not only in the personal resistance they must have faced, but in the elaboration of a more inclusive, less muscular, and, as Mogherini points out in her foreword, more ‘incisive’, conception of security.