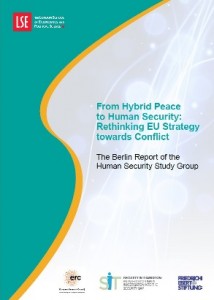 A recent publication of likely interest to Euro Crisis in the Press readers is the The Berlin Report of the Human Security Study Group. Entitled ‘From Hybrid Peace to Human Security: Rethinking EU Strategy towards Conflict’, it was presented to the European External Action Service in Brussels earlier this year.

The report argues that the EU is a new type of 21st century political institution in contrast to 20th century nation-states. 20th century nation states were based on a clear distinction between inside and outside. Typical outside instruments were state-to-state diplomacy or economic and military coercion. Typical inside instruments are the rule of law, politics, and policing. In today’s complex, contested and connected world, outside instruments do not work; they backfire and make things worse. Human security is about extending the inside beyond the EU.

EU Policies in the Democratic Republic of Congo: Try and Fail?
Valerie Arnould and Koen Vlassenroot

Cybersecurity: A Challenge for Democracy and Human Security in Europe
Emmanuel Darmois and Geneviève Schméder

What Role for the Private Sector in European Foreign and Security Policy?
Mary Martin

Why we should oppose British air strikes against ISIL in Syria

This entry was posted in Balkans, Europe, Migration, Ukraine and tagged Borders, cybersecurity, DRC, EU, governance, human security, hybrid peace, justice, Libya, Mogherini, private sector, sanctions, Syria, transitional justice, Ukraine. Bookmark the permalink.
We use cookies on this site to understand how you use our content, and to give you the best browsing experience. To accept cookies, click continue. To find out more about cookies and change your preferences, visit our Cookie Policy.