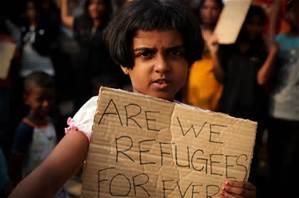 Fidelity to one’s principles is measured by how they are honoured in times of crisis. Hannah Arendt – a refugee who fled Nazi Germany and became one of the most influential political thinkers of the twentieth century – showed us how European states, supposedly built upon a foundation of human rights, deserted their principles with disastrous effects when faced with an influx of rightless refugees in the 1930s. Her insights, published the same year as the UN Refugee Convention was opened for signature, are eerily prescient. This week the EU and Turkey finalised a deal that would see blanket returns of irregular migrants to Turkey, and a resettlement programme for Syrians – but not Iraqis, Afghans, or Eritreans – who stay in Turkey and do not try to cross into Europe, implemented on the basis of a “1-Out-1-In” mechanism. In exchange for acting as Europe’s migration policeman, Turkey will receive €3 billion in aid, the possibility of visa-free Schengen-zone travel by June, and “reenergised” EU-Accession talks. Following the serious concerns expressed by rights groups when the possibility of such a deal was first announced, EU leaders claim to have inserted safeguards into the deal that will ensure that it complies with international and EU law. But rights groups and UNHCR are unconvinced.

The problem with EU professions of fidelity to human rights and international obligations in this particular area is that Europe has a long history of trying to get out of its obligations under the Refugee Convention, and an equally long history of, to all intents and purposes, criminalising the seeking of asylum – an act which is not a crime but a basic human right enshrined in Article 14 of the Universal Declaration of Human Rights. The EU-Turkey deal should not be seen as exceptional episode but, rather, as the latest policy in a long-running series of attempts to reduce the numbers of asylum seekers and irregular migrants reaching European territory. These policies began in earnest in the 1980s once international travel became cheaper and travel routes opened to people fleeing wars and rights abuses in Africa and Asia. European asylum systems, which were not designed to deal in an efficient manner with large volumes of applications, quickly became backlogged and costs spiralled. But rather than attempting to reform the structure of asylum systems, European states decided instead to conflate asylum with irregular economic migration, and implement restrictive policies designed to prevent, reverse, and deter arrival.

Among the measures implemented to prevent arrival were visa requirements for people from countries considered to be “refugee-producing”; airline carrier sanctions which fined airlines for transporting individuals without appropriate travel papers into the territory of a European state; and the interdiction of boats thought to be carrying migrants at sea, to prevent the individuals on board from reaching European territory and lodging an asylum claim. For those people who managed to get around these non-arrival policies, a range of measures designed to reverse arrival, or shift responsibility for these arrivals onto other states, were implemented. Safe third country arrangements were signed with states on the periphery of Europe, which would allow returns of irregular migrants, including asylum seekers, if it could be demonstrated that they had transited through and could, theoretically, have lodged an asylum claim there. Within Europe, the Dublin Regulations permit responsibility-shifting among European states, enabling those in the north and west of the continent to shift the majority of the burden of examining asylum claims and providing protection onto the southern and eastern states. These policies have proven to be rather ineffective both at preventing arrival and ensuring the efficient functioning of asylum systems. But they have also been partly responsible for the creation of the image of a “genuine” refugee as a person who seeks physical safety and little else; and for whom the exercise of choice and the desire for a real life, and not just to be alive and living with difficulty, is illegitimate.

For those whose arrival could not be prevented or reversed, campaigns to reduce the protections they were afforded in a bid to deter future arrivals were the next stop on the journey. Across Europe asylum seekers have been denied the right to work while their claims are processed, leaving them no choice but to be reliant on minimal state welfare – perpetuating the image of the refugee as an economic burden. As the asylum issue became conflated to a greater degree with security throughout the 2000s, the detention of asylum seekers became more and more common. The UK, for example, currently has no time limits on immigration detention, and detention centres have frequently been criticised for the appalling conditions in which people, whose only “crime” has been the exercise of a basic human right, can be forced to live. When faced with no other option than to examine an asylum claim, the Refugee Convention itself became the next target. Highly questionable interpretations included restricting “persecution” to only those actions of state authorities and not non-state actors, or refusals of claims which included violations of socio-economic rights. Ultimately, none of these policies seems to have had the desired effect. According to Eurostat, numbers of asylum seekers have risen progressively throughout the 2000s, although the numbers still pale in comparison with the numbers of displaced people elsewhere in the world. This latest attempt to prevent the arrival of asylum seekers in Europe is unlikely to work any better, and is instead more likely to drive ever more people into the arms of people smugglers.

There have been improvements in some of these conditions. The recast Qualification Directive of 2011 raises the standard of the protection offered to those who are not eligible for refugee status but who are still in need of international protection; and individual states have had to scale back some of their more restrictive policies. But it is arguably the intervention of rights groups and the bringing of cases to the European Court of Human Rights, or to domestic courts, that deserve the credit for reminding control- and prevention-oriented states not only of their human rights obligations, but of the fundamental role that human rights are supposed to play in every aspect of European life.

But the EU, it seems, is suffering from selective amnesia. It wasn’t so terribly long ago that Europe was a prime refugee-producing region and it was Europeans running for their lives – both in the 1920s to 1950s and then again in the 1990s. The rest of the world resettled a great many of these earlier refugees, and we all know what happened to those to whom our doors were slammed shut in the 1930s and in the mid-1990s. Ultimately, this deal has very little to do with respecting the human rights of any of the people trying to reach Europe, or any of the millions more who are not. But, in their negation, human rights are indeed central to this deal. Not only does the violation of the human rights of refugees undermine the protection of refugees everywhere, but also undermines the strength and force of human rights for everyone. And ultimately it undermines, perhaps fatally, the entire European project. Our most basic and dearest principles have turned out, once again, to be not quite so dear after all.

Natasha Saunders teaches at the School of International Relations, University of St Andrews. Her research focuses on forced migration, human rights, and political theory. She is the author of “Paradigm shift or business as usual? An historical reappraisal of the ‘shift’ to securitisation of refugee protection” in Refugee Survey Quarterly.