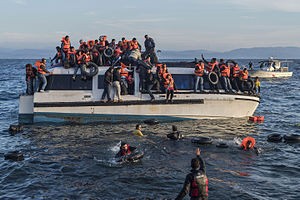 ‘We need more than a humanitarian response […] We need political leadership and action,’ Filippo Grandi, the United Nations High Commissioner for Refugees, said on 8 March 2016. Referring to the fact that ‘Europe is now seeing record numbers of refugees, and migrants, arriving on its shores’, Grandi stressed that ‘this emergency does not have to be a crisis, it can be managed’. Grandi, who was speaking to the European Parliament in Strasbourg, did not mention to what extent, in recent years, the militarisation of migration and border controls has been explicitly bound with notions of humanitarianism. Nevertheless, I guess he is aware that the current focus on both the humanitarian and security-related aspects of the phenomenon suggests a more complex logic of threat and benevolence that allows for a security-humanitarian response.

Unfortunately Grandi’s concern is not new. The problematic relationship between humanitarianism and politics was clearly described 17 years ago by James Orbinski of Médecins Sans Frontières, on the occasion of his Nobel Lecture: ‘Humanitarianism is not a tool to end war or to create peace. It is a citizen’s response to political failure. It is an immediate, short term act that cannot erase the long term necessity of political responsibility.’ The novelty is that Orbinski was criticising those interventions called ‘military-humanitarian’, while Grandi is referring to the ongoing migration management, too often framed as a humanitarian emergency.

A quick look at how the moral discourses typically associated with the humanitarian aid organisations are today gaining importance in the context of border control makes clear what types of political and epistemological implications this discursive dislocation has. Consider, for example, the news, images and video produced by the Italian Navy during the operation Mare Nostrum – the military-humanitarian operation in the Mediterranean targeted at both rescuing migrants and arresting smugglers. Let me note that Mare Nostrum (our sea) was the Roman name for the Mediterranean Sea, hijacked by Mussolini to frame fascist propaganda about the ‘Italian lake’. As the same (ambivalent) name indicates, the possessive ‘our’ projects the Mediterranean as a European space of care and control, while it ambiguously refers to both Italy and Europe. 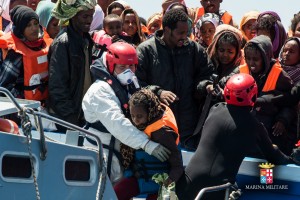 Looking at the images produced by the new ‘frontline journalists’ (read: soldiers on the ships), we see how most of the photographs trigger sympathy for the soldiers and pity for the migrants. The images draw us into a community of witnesses. A community in which the spectator is positioned as the possible saviour, while the rescued bodies are the ‘other’. Border control is redefined within a moral imagination that puts emphasis on human vulnerability. The soldiers’ activities are depicted as similar to the recurring type of imagery of aid delivery, with just rescued, grateful migrants receiving food parcels and water. Quite revealingly, women with their tiny, innocent babies are the most commonly represented subjects.

The extent to which the legitimacy of this military-humanitarian operation (which costs €9 million per month) depends on how it is described and explained through media, becomes evident through the analysis of the official video of the operation. As you can see, while in the first part of the video we are invited to witness the dramatic ‘emergency’, feeling the pressure to be concerned or upset in response to the horrifying images; in the second part, the high-adrenaline spectacle pivots on the soldiers challenging the waves to resolve the catastrophe. And, what about the happy ending of the final frame that presents us with an intensely moralistic context that reframes the operation as humanitarian benevolence? Outside of any historical or political framework, of course. The issue of migration flows is here construed as a journey without destination, as a tragic game of fate. As protagonists of a crisis that comes from nowhere, migrants are depicted at the same time as subjects who are forced to put themselves in danger – departing on unsafe boats – and as subjects at risk (of death and trafficking) who need to be saved.

To sum up, speaking the language of combatting human smuggling and potential terrorists, while rescuing lives and protecting migrants’ human rights, Mare Nostrum performs the spectacle of the ‘humanitarian battlefield’. It is one spectacle, but different publics understand it differently. Like the different light refractions of the same kaleidoscope, the national spectacle of surveillance, policing, and border control is also the cosmopolitan spectacle of rescue and salvation. Mare Nostrum speaks different languages to different political constituencies: to migrants and citizens, to smugglers and transnational activists, to right-wing government coalition members and NGOs.

As an illustration of my argument, let me conclude with two recent examples that unequivocally demonstrates the integrality of humanitarian discourses of assistance and protection in the on-going migration governance. On 15 October 2015, during his visit to the Italian Parliament, the UN Secretary-General, Ban Ki-moon, paid homage ‘to the Italian soldiers who saved thousands of human lives in the Mediterranean’, and thanked ‘the Italian population for the efforts made to welcome and assist migrants.’ Concluding the event, the Italian Prime Minister, Matteo Renzi, affirmed: ‘the Italy that welcomes you is the country of the Italian officers who became nurses to deliver babies in the ships on the Mediterranean. It is an Italy of which we are proud.’ Again, the bio-political imperative of managing lives is expressed through an aesthetics of trauma, where war (on migrants) is represented both as an intimate experience of sorrow and a public act of peace-making.

On the other hand, in these days we finally see several humanitarian actors criticising the EU-Turkey deal, and their use of humanitarian narrative (and actors) to legitimise border control. UNHCR, Médecins Sans Frontiers, the IRC, and the Norwegian Refugee Council say they will not work on controversial aspects of the EU-Turkey migration deal. “UNHCR is concerned that the EU-Turkey deal is being implemented before the required safeguards are in place in Greece,” a spokesperson said. “UNHCR is not a party to the EU-Turkey deal, nor will we be involved in returns or detention. We will continue to assist the Greek authorities to develop an adequate reception capacity.” I think it is an important point. Migration and asylum are political concepts. And the statements of these actors raise questions on the (terrible) EU crisis management, denouncing how humanitarianism is often being confused with political responsibility.

Back to the refraction of the military and the humanitarian frame, I think that even though images can do much to expose a crisis, they can do little to explain it. Rather than promoting solidarity in the name of human dignity, the military-humanitarian narrative sustains a complex ontology of inequality that reproduces specific value hierarchies and evaluations of human life. As in other instances of humanitarian government, care and control both fuel and feed off each other, nurturing a ‘compassionate repression’ that fails to bridge the gap between ‘us’ and ‘them’. On the contrary, this risks providing support to the neo-liberal global governance in establishing an asymmetric (in terms of both agency and dignity) moral geography of the world.

In stark opposition to this framing, we should keep in mind what is happening in the last few months. The collective march of refugees across the Balkans has rendered the agency of migrants themselves highly visible, exposing the crucial role they play in challenging existing governance structures. As we can see, people on the move challenge the subject position of the helpless victims, and reassert their agency, their social and political identities, their hopes and dreams, their capacity to choose their own destiny.