The crisis in Catalonia: How did we get here and how do we get out?

This post summarises the second debate of the conference cycle about the crisis in Catalonia, titled Spain and Catalonia: Is There a Way Out of the Impasse?, 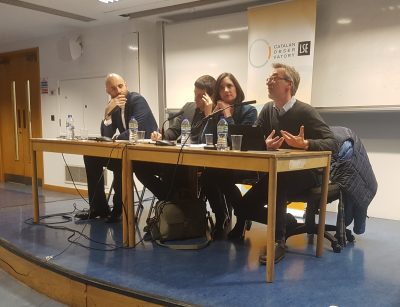 took place on February 8 at the London School of Economics and Political Science (LSE). This debate analysed the political causes of the conflict, the current crisis, and the possible means of resolution. Jonathan Hopkin, Sandra León and Toni Rodon, three academics whose research has addressed the Spanish political system from different perspectives, were the speakers responsible for discussing these issues. In this post we collect the main ideas that emerged throughout the conference.

The causes of the conflict: How much does the economic crisis explain?

The moderator of the session, Antonio Barroso, opened the debate by asking Hopkin to what extent the Catalan case is unique in Europe or if it is comparable with that of other regions. In addition to referring to the dynamics of party competition in Catalonia -particularly the struggle for hegemony between the independence parties- the English political scientist defended the need to place Catalonia in the context of comparative politics. For him, the secessionist movement must be framed within the many anti-establishment movements that have emerged in recent years in many advanced democracies, such as Brexit, Trump’s victory, or the triumph of Syriza. All these phenomena share the fact that they emerged after the Great Recession that began in 2008. According to Hopkin, high levels of unemployment and the increase in inequality tend to provoke the radicalisation of political positions. In addition, in adverse economic circumstances identity politics prove to be an especially powerful weapon. Therefore, even if each of these anti-establishment movements is presented as unique, in reality, all originate in the important deterioration of the economic situation.

Toni Rodon qualified the contributions of Hopkin by affirming that in many occasions, before an economic crisis, citizens respond by becoming more conservative and not by radicalising their positions. The political scientist made reference to one of his investigations in which he shows that those who have suffered the most from the economic crisis are not necessarily those who support independence. According to Rodon, the factors that explain the rise of the secessionist movement are national identity and, above all, the disappearance of the incentives for the formation of political unions.

According to his explanation, political unions have historically had three advantages: first, they are positive for the regions that are annexed because they serve as a safeguard when economic crises or natural disasters occur; second, they provide security against possible external attacks; third, from the economic point of view, they allow access to larger markets. However, for Rodon these incentives would have disappeared in Europe since the economic shocks are managed by the European Central Bank or other supranational institutions, armies are no longer as relevant as before and the markets have globalised (for example, Rodon said that nowadays Catalonia exports most of its goods to international markets). All this would have caused some of the national minorities that contain many countries to have opted for independence. The result would be what Rodon called ‘the era of secession’, since in the last 50 years more new countries have been formed than ever before.

The political scientist Sandra León defended an intermediate position between Hopkin and Rodon in relation to the role of the economic crisis. León ventured that, even if the Catalan economy improved, it is very probable that the independence demands would last. In addition, she said that in Catalonia, unlike what happens in Scotland, individuals with lower income and educational level are more favourable to the parties that defend the permanence of Catalonia in Spain. However, she also alluded to the economic crisis as the trigger that allowed pro-independence political entrepreneurs to capture a larger portion of voters who, a priori, in terms of identity were not inclined to support independence. In this sense, León suggested that the turning point for the voters of CiU -when they began to support more clearly pro-independence positions- took place in the fall of 2012, when the Generalitat demanded a reform of the regional financing system.

What explains the current impasse?

Sandra León was responsible for answering the second question of the moderator on what factors explain the difficulty of investing a president for the Generalitat in these circumstances. The lecturer provided several reasons that clarify why the pro-independence parties are so reluctant to more pragmatic positions (such as proposing another candidate), once it seems clear that Puigdemont has many difficulties to be elected president. In the first place, she referred to the success of Junts per Catalunya (JxCat) when it came to imposing the narrative of restoring the government of Catalonia and the ‘legitimate president’. Renouncing this road map would be perceived by many pro-independence voters as a defeat and, according to León, would have a high political cost for the pro-independence parties. León also mentioned additional relevant factors such as the pressure carried out by the secessionist social movements – on which the parties have less and less control – and the fact that within the JxCat list there are several independent candidates, which are theoretically less inclined to make ideological concessions for reasons pragmatic. In the second place, polls show that many voters of ERC and CUP prefer Puigdemont as president, which leads these parties to be very cautious when proposing ways that do not go through the investiture of the former president. Finally, the competition for hegemony within the pro-independence bloc between ERC and JxCat results in neither party daring to make concessions.

Although pragmatic positions tend to be adopted in this kind of scenario, according to León, the prisoner’s dilemma in which the actors find themselves today makes the reduction of polarisation very difficult. However, she pointed to the possibility of having a government with some symbolic recognition towards Puigdemont as a possible solution that would minimise the electoral cost for pro-independence parties to move towards more pragmatic positions. Another option for the independence movement is to extend this situation as much as possible in order to be able to justify to its electorate that they did not surrender so easily. 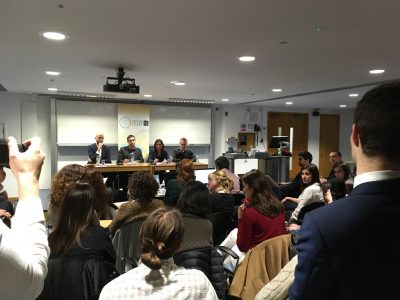 Regarding the rest of the Spanish electorate, the political scientist explained that public opinion is, in general, favourable to the measures adopted by the government (such as the application of 155) and increasingly opposed to granting greater autonomy to the regions. This favours parties such as Partido Popular and Ciudadanos, and harms PSOE and Unidos Podemos, which tend to be more favourable to decentralisation. Regarding the latter, León mentioned her concern about the fact that it is precisely those parties that could act as a bridge between Spain and Catalonia who try to avoid the debate due to the internal tensions that it provokes in their parties. The absence of Unidos Podemos and the PSOE, together with the current competition for the center-right hegemony between the PP and Ciudadanos, draws a scenario in which it is unlikely that Madrid will adopt measures favourable to greater autonomy for Catalonia or other regions.

According to Jonathan Hopkin, this process of polarisation has also been happening in other European countries. In the context of decline of the traditional hegemonic parties, the new parties would present more aggressive profiles to compete for the hegemony of the political space. For Hopkin, this is how the discourses of ERC and Ciudadanos are to be understood.

Is there any solution?

The last question of the moderator, which asked about possible ways of resolving the conflict, was addressed to Toni Rodon. The political scientist explained that in the long term there are solutions to the Catalan conflict, particularly those based on the accommodation of differences in a federal system. However, in the short term, he was more pessimistic because he presumed that revanchist attitudes would dominate the actions of the political parties in Spain and Catalonia. Rodon used two observations to support his prognosis. First, on the one hand, is that the median Spanish voter does not support decentralisation and does not recognise the existence of a minority within Catalonia. On the other hand, Rodon does not perceive that any national party, with the exception of Unidos Podemos, decisively supports any of the measures that could unblock the conflict, such as an agreed referendum or a federal reform of the constitution.

In the final conversation between the speakers and the audience, Hopkin and León suggested some possible solutions to the conflict. The former stated that there is no clear majority in Catalonia that can impose its political project unilaterally, which is why Spain needs more federalism and fewer impositions from both sides. Finally, the latter warned that in order to allow for a different distribution of power among the actors, there must be more than one axis of political competition. For León, a way out of the crisis is to introduce new issues on the agenda – beyond the nationalist question – that allow for the creation of coalitions between the unionist parties and the separatists.

Javier Carbonell  (@javierccll) was born in Valencia, Spain and is currently completing an MSc in International Relations at LSE and has studied Political Science and Hispanic Studies as an undergraduate. He is Europe Editor in The London Globalist and member of the editorial board of Millennium: Journal of International Studies.

Luis Cornago Bonal (@luiscornagob) holds a dual bachelor in Political Science and Sociology from Universidad Carlos III de Madrid (UC3M) and is pursuing a master’s degree in comparative politics at the London School of Economics. He has been the recipient of the ‘la Caixa’ scholarship (2017) to carry out postgraduate studies in the United Kingdom.

An explanation of the current political situation in Catalonia

This entry was posted in Democracy, Elections, Nationalism, Spain and tagged Catalan Independence, Catalonia, identity politics, Nationalism, Spain. Bookmark the permalink.
We use cookies on this site to understand how you use our content, and to give you the best browsing experience. To accept cookies, click continue. To find out more about cookies and change your preferences, visit our Cookie Policy.