Salvini, the Leader who Replaced Berlusconi 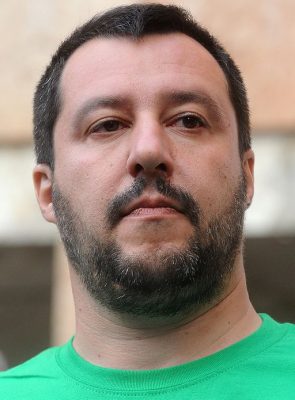 Silvio Berlusconi no longer leads the Italian centre-right coalition. The outcome of the recent election has given this role to Matteo Salvini, the younger (ex-Northern) League leader who aspires to be the next prime minister. Mr Salvini has turned himself into a nationalist during the past five years, after a long political history as a separatist militant. His party achieved 17,3%, up from just 4% in 2013, before his ascendency to the leadership. Berlusconi’s Forza Italia (with a mere 14%) is now the second party of the coalition for the first time since 1994. This means an obvious generational change within the main right-wing political alliance: Salvini is 45 year old, Berlusconi 81. But the League’s success also involves a radicalization of the centre-right’s political stance, which focuses on a Trump-style motto: “Italians first”. Even if it is not a monolithic force, the new Italian centre-right is opposed to mass immigration, promises a 15% flat tax, and claims a return of sovereignty from the European Union. These are the core themes of Salvini’s leadership, based on a defence of some local identities against globalization and the establishment. But who is Matteo Salvini?

The League’s leader is a professional politician since 1993, when he was elected for the first time in the City council of Milan, his hometown. Then, Salvini was a strong supporter of a Northern Italy’s independence project. At the age of 17, he joined the party founded by Umberto Bossi to fight the Italian nation-state. Central government was accused of exploiting the richest regions of the country to sustain the South. Bossi and his followers used to mock the Italian flag and threatened to secede in order to establish the so-called Padania, an imagined country north of the Po river.

“Padania is not Italy”. This was a slogan printed on t-shirts often worn by Salvini himself, who has been serving as an MEP since 2004. In those years, the future leader refused to recognize any president of Italian Republic, and even protested against Queen Elisabeth in support Scottish independence when she was on a visit to Milan. So the identity issue already played a key role in the original League but it was connected to a small homeland, not to Italy as a whole. What is more, during the 1990s Salvini presented himself as a leftist politician. He led a list called Comunisti Padani in the election organized by the League to form an independentist Parliament. It was a very different era for a champion of a new populist right who in 2014-2015 marched together with the neo-fascist CasaPound. But this is an important aspect of his political and mediatic rise: Salvini has always been a provocative and unpredictable figure.

For twenty years he used to be a organizer of street demonstrations against speed fines, crimes and immigrants. “I would not want in twenty years’ time all the children in our schools to be called Mustafa”, he stated during a march in Milan in 1999. But Salvini has also been a skilled communicator. In 1997 he became the first director of Radio Padania Libera, the official party radio. He turned it into the uncensored voice of the Northern League. Anyone could call live and say anything about Italy and its politicians. For years, director Salvini conducted radio broadcasts to challenge any national celebration day and even to cheer against the national football team. In short, the post-ideological Salvini has always been a quintessential opposition politician. Always against someone or something, even when the Northern League was in government (namely in 1994, 2001, 2008). But despite his long political commitment, he had been far from real power until he found himself at the helm of the party five years ago. Shortly before, Salvini had emerged as the charismatic leader of the youngest activists, many of whom have just been elected in Parliament together with him. And this has been be useful to him at the point of of the League’s worst crisis.

Salvini took over the party in late 2013, after the old leaders had stepped aside. Bossi, the founder, was investigated for fraud. Roberto Maroni, his successor, led the Northern League for a year and a half and then he decided to quit in order to fully devote himself to the role of governor of Lombardy. Salvini was the ideal new leader. He was young, energetic, and very effective in front of TV cameras. Most importantly, under Maroni, Salvini was already the ‘number two’ of the party, whose slogan was ‘The North first’. League supporters trusted him, they considered him one of them. Therefore, in December 2013, Salvini easily defeated Bossi at the party primaries with 82% of votes.

In those days, few would have bet on a rebirth of the League. And even fewer people would have imagined its transformation into a nationalist party. Yet, the new leader began to work on his project straight away. Salvini is considered an opportunist politician. He listens to common people through the radio, visiting street markets, and on social media. Then he transforms their problems into his political agenda. Nowadays there are three massive issues that concern the voters he is targeting: unemployment, mass migration, and Islam. The League proposes to give jobs to Italian citizens first, to deport all illegal immigrants, and to forbid new Islamic mosques and centres. In short, Salvini is offering a particular political programme targeted at those who perceive themselves to be on the losing side of globalization. On the right, these efforts have filled the gap left by Berlusconi’s decline. On the left, they have challenged the rise of the anti-establishment Five Star Movement.

Thanks to his long apprenticeship as a militant far from power and to his communication skills, Salvini has turned himself into a skilled a political chameleon. He was an independentist, he became a “sovranista”. He used to insult Southern citizens, he then started traveling throughout Southern Italy in search of votes. He was a ‘communist’, he is now accused of being a ‘post-fascist’ leader. In the end, the far-right Salvini’s leadership has exploited the current Zeitgeist to get more votes. “I dealt with so-called ‘left issues’ in the past and I deal with them now”, Salvini said in an interview with the author in 2015. “Those themes are the defence of identities, the environment, and poor people”, he added. According to the League leader, “the distinction between right and left is no longer effective, because today the alternative is between those who are small and those who are big, between the people and the European financial establishment”. Salvini continues to consider himself a federalist but says that “first you have to save all of Italy” from globalization  Basically the same position as his European best friends: Marine Le Pen, Geert Wilders and Heinz-Christian Strache.

This is a key point: the new League pursued an international Eurosceptic alliance before rebuilding a national coalition with Berlusconi’s party. At the Turin congress, where he was elected on 15 December 2013, Salvini hosted the PVV and FPÖ leaders, in addition to representatives of Front National and Vladimir Putin’s party United Russia. He began a cooperation with them in view of the subsequent 2014 European election. Salvini’s programme was clear: get out of the Eurozone soon and militarize national borders to stop the new migrations. The League achieved 6,16% and regained visibility and consensus.

In 2015, this far-right alliance finally succeed in forming an autonomous group in the European Parliament, the ENF. Marine Le Pen was appointed as president, Matteo Salvini as vice-president. In the same year, Salvini met president Putin in Milan to consolidate a dialogue with the Russian establishment, which would have resulted in a cooperation agreement between the League and United Russia party. In 2016, the aspiring Italian prime minister flew to the US to be photographed with the presidential candidate Donald Trump, who later denied knowing who Salvini was. That picture enabled the League leader to present himself as the “Italian Trump” and to transform his party into a hyper-personalized electoral machine. Le Pen, Putin, and Trump represent Salvini’s ideal pantheon. But if we look for a premier model, we find it in Viktor Orbán, the prime minister of Hungary and leader of Visegrád group, which is a strenuous opponent of EU immigration policies.

The European stage allowed Salvini to stay away from the national ‘political theatre’ in Rome while offering him a platform to oppose European law, globalization, mass migration, and same-sex marriage. “I want a normal country with normal people”, Salvini keeps saying during his daily television marathons. All the polls had underestimated his strength before the 2018 general elections, which were dominated by the issue of immigration. But Salvini’s leadership is transforming the centre-right alliance in depth, even if Berlusconi performed an about-face on the question of exiting the Eurozone. Salvini’s goal is to absorb the former premier’s electorate at the next election, turning it away from the EPP family. First, however, he must try to form a government in the coming weeks and avoid the deathly embrace of the Five Star Movement, which is now his main competitor. The Five Star are the largest party (32,6%), the centre-right is the largest coalition in the Parliament (37%). But neither of them have enough seats to form an autonomous majority and last week they were forced to negotiate to elect the new Parliament speakers.

Related posts on LSE Euro Crisis in the Press:

24 Responses to Salvini, the Leader who Replaced Berlusconi