Spain is no longer exceptional: Mainstream media and the far-right party Vox

For a long time Spain and Portugal have been considered exceptions within the European Union due to the lack of a far-right political party with representation in parliament. However, this situation is no longer the case in Spain due to the recent entrance of Vox in the Andalusian Parliament. Much has been written about Vox’s political nature, its electoral possibilities in the long-term,the reasons behind its upsurgeand how it changes the Spanish political landscape. This article will focus on the way in which the mainstream political media in Spain, El País and El Mundo, treated this party in terms of coverage. After briefly discussing the recent literature on far right and media coverage, we argue that Vox received outstanding media attention considering the scarce percentage of Spaniards who had considered to vote for it. First, we explain the dynamics of media attention to Vox both at the national and Andalusian electoral level and compare it with the voting intention for the party. Second, we compare the media attention received by Vox and a similar party in terms of voting intention and results in previous elections: the Animalist Party Against Mistreatment of Animals (PACMA). Last, we compare the coverage of Vox with the rest of the prominent parties at stake in the Andalusian Regional Election of December 2018.

How did the mainstream Spanish media treat Vox?

Academic literature(Norris, 2010; Beck et al. 2002) recognizes that mass media coverage has a significant role in electoral politics as it is the primary channel through which voters receive information about politicians and parties. Particularly, a stream of research focuses on how media visibility given to a political party positively influences public support of that party (Hopmann et al. 2010; Oegema & Kleinnijenhuis, 2010). In the context of populist right-wing parties, research in Belgium, the Netherlands and Germany shows that party and leader visibility in the news have strong effects on anti-immigrant parties success, and not vice-versa (Vliegenthart, Boomgaarden, & Van Spanje, 2012). Furthermore, a study conducted in 2018 provided new evidence consistent with the idea that populist right-wing parties benefit from media saliency. Findings showed that extensive media coverage played a unique causal role in increasing support for UKIP (Murphy & Devine, 2018).

In this context, it is interesting to study how the Spanish media has treated the far right party Vox throughout its lifetime. Vox is not a new party in the Spanish panorama: it was founded in 2013 by members of the conservative Popular Party (PP) who accused their former party of being too centrist and not sufficiently defending the interests of Spain. The results of Vox were not promising until the last Andalusian regional elections in December. At the European Parliamentary Election of 2014, Vox reached an acceptable 1,57% of the votes, but did not achieve any seat. In these elections, the parties Podemos, founded in 2014, and Ciudadanos, recently introduced into the national electoral level at the time, got sizeable representation anticipating the end of the bipartidism in Spain after more than 30 years. However, Vox did not follow the wakeof these parties and obtained worse results: 0.45% of the votes in the 2015 regional elections of Andalucia; a 0.23% in the Spanish general elections of 2015; and a 0.2% in the repeat elections of June 2016. Given the previous lack of success of the party, the outstanding 10.97% result that Vox achieved in the December 2018 Andalusian regional elections have been received with surprise by most analysts and political parties. Its entrance in the regional parliament is further aggravated by current surveys indicating that Vox’s phenomenon is here to stay.

To analyze Vox media coverage, we have compiled all articles dealing with Vox in the most important newspapers of Spain –El País and El Mundo- during the last few years. The articles were downloaded from the online database Lexis Nexis. An initial search retrieved all articles in which the mention “Vox” appeared to be designated as the political party[1]. Figure 1 shows Vox monthly coverage from the Spanish general election in June 2016 to the Andalusian election in December 2018. As it can be seen figure 1, Vox reached a peak in October, when it managed to fill the pavilion of Vistalegre with more than 9.000 people. In the weeks following the event -until the beginning of November- this attention decreased but did not plummet to previous levels to the event. Later during November, Vox saliency rose again to levels unseen in previous coverage, explained mainly by an outstanding coverage related to the Andalusia Regional Elections campaign, as Figure 1 shows. 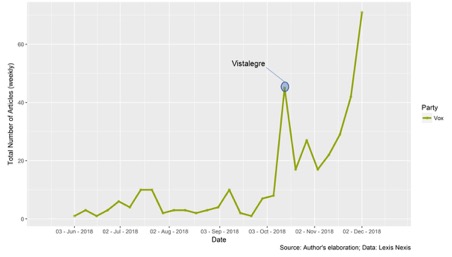 Moreover, we focus on the coverage that Vox obtained during the last regional elections in Andalusia. To this end, all the articles in 2018 in which the word “Vox” co-occurred with other terms related to “Andalucía” have been collected. As Figure 2 shows, it can be concluded that the Vox’s coverage increased dramatically since the meeting of Vistalegre and that the surveys were capable to capture partially the real voting intention of Vox, which was higher than the one predicted by most of the surveys. 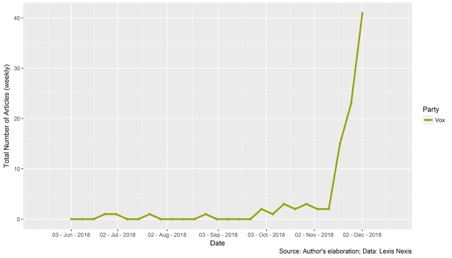 It is difficult to assess whether the coverage of a party has been striking or not by studying it in absolute terms without contrast for comparison. Thus, we have studied Vox coverage in comparative terms with the animalist party, PACMA. We argue that this political party stands as the ideal candidate to be compared with Vox because of the following: 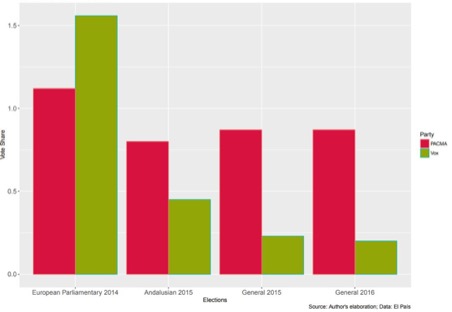 We have carried out the comparison on three levels. First, we have compared the level of attention between Vox and PACMA between the 2014 European Parliamentary Election and the 2016 Spanish General Election. In this period both parties displayed similar results; although PACMA was more successful in the general elections. However, as can be seen in figure 4, the attention that both parties received was starkly different for a long period of time. According to our results, Vox benefited from higher mainstream coverage. 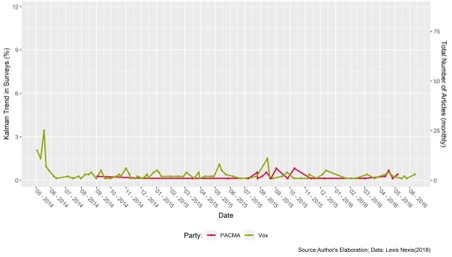 Second, we have compared Vox and PACMA from the Spanish General Elections of 2016 to the Andalusian Regional Elections of 2018. Since no data was available on relevant elections for our purposes[2], we have crossed the number of articles with the vote estimation that these parties obtained in the main surveys. Figure 5 shows that Vox had higher coverage than PACMA even when the difference of voting intention between the two parties was striking. When the voting intention of Vox increased, the difference of coverage between the parties rose. This difference is most evident in the months preceding the Andalusian Regional Elections. 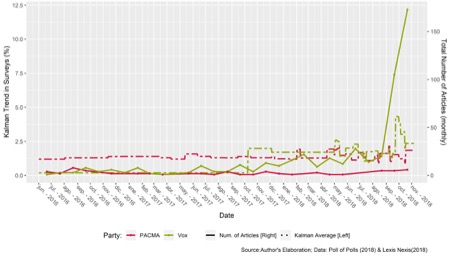 What took place during the Andalusian Regional Election?

After concluding that Vox did receive more national attention than a party similar in terms of voting intentions, we analyze the recent Andalusian elections in which Vox obtained representation for the first time. We have looked for all the articles in which the mention of one party[3]co-occurred with the mention of terms related to Andalucía. First, we show that Vox had outstandingly higher coverage than PACMA in figure 6: 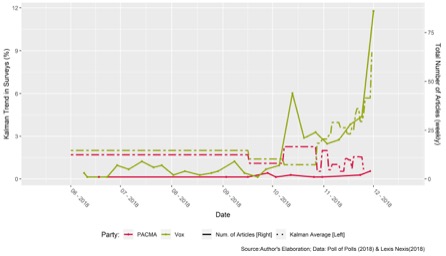 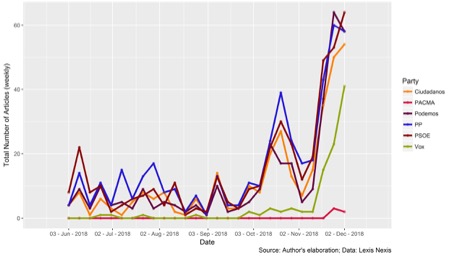 After analyzing the coverage of Vox, we conclude that the party received more attention nationally than similar parties (PACMA) and an outstanding level of coverage when compared to the main political parties. There are many plausible reasons which might have caused this level of media attention, such as the fact that Vox benefited from a larger budget to carry out their electoral campaign or that news related to Vox may have received a higher level of attention by the public. Given that the relationship between voting for far-right parties and media coverage is a reality, we would like to 1) encourage further studies on the topic and 2) bring the attention to the role of media in electoral politics. As Murphy & Devine (2018) pointed out in their recent study, “if media coverage of political parties is driven by public support for the parties – even if media coverage then increases public support further – it could be argued that media outlets are facilitating popular sovereignty. On the other hand, if media coverage independently changes public support rather than reflecting it, this could potentially represent a point of distortion in the functioning of a democracy, depending on how we understand the role of journalism in democracies.”

[1]There were mentions of the idiomatic expression “Vox populi”,  which were excluded from our sample.

[2]During 2017, Catalan elections took place. In those elections PACMA attained a 0.89% of the votes. However, the irrelevance of Vox in Catalonia makes it difficult to use this election as a measure of comparison.

Sergio Olalla Ubierna holds a master’s degree in Social and Public Communication fom the London School of Economics. His research focuses on media and public opinion.

J. Enrique Chueca Montuenga holds an MA in International Political Economy from King’s College London and has a BSc on Industrial Engineering with a minor on International Studies focused in economics from Carlos III of Madrid University. He has recently worked as a consultant on Energy for the Inter-American Development Bank and for the European Parliament on digital and industry regulation and innovation related issues.

Javier Padilla holds a dual bachelor in Law and Business from Universidad Autónoma de Madrid (UAM) and a master’s degree in philosophy and public policy at the London School of Economics. His research is focused on electoral behaviour, public opinion and the European political space.

The Catalan Crisis: Is There a Right to Self-Determination in the International Context?

Immigration, Welfare Chauvinism and the Support for Radical Right Parties in Europe

3 Responses to Spain is no longer exceptional: Mainstream media and the far-right party Vox