Finnish competitiveness-raising policies and their discontents

Posted on October 8, 2015 by Eurocrisis in the Press

Although Finnish politics have been concerned about the country’s competitiveness for quite a while now, the public discussion reached a temporary climax with PM Juha Sipilä’s televised speech late September. In this widely discussed speech, he argues, through various clever rhetorical devices, that Finland’s competitiveness is at stake and that something has to be done about rising state indebtedness.

To some observers, the policies advocated seemed to come straight from the employers’ federations’ pen. For the Finnish labour movement, the key sticking point was not so much the content as the way this content was presented. The labour movement felt (quite 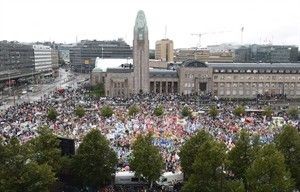 correctly) that the government intended to interfere with issues that are dealt with in Finland through collective agreements and negotiations between labour market actors – instead of through coercive legislation. As an immediate result of the Prime Minister’s speech, the labour movement organized a political protest in Helsinki, which was attended by some 10 000 people. This protest is significant, because it was the first large scale political protest against a government in years.

How did we get to this situation where the government feels compelled to enact radical legislation, which erases long-standing trust between negotiation partners as well as changing the rules of the game in Finnish labour market relations? Moreover, what happens next?

To understand the atmosphere of crisis in Finland, it is useful to recap some major developments in the Finnish economy since 2008. First, the pillar of Finnish exports, the pulp and paper industry has gone through a harsh restructuring. It seems that for the moment, pulp and paper exports to the rest of the world are doing relatively well. But earlier, many people lost their jobs with factory closings. Another big hit to the Finnish economy was the downfall of Nokia. And a final critical development was the sanctions regime against Russia (one of Finland’s main trading partners). I wrote about these issues here.

Furthermore, labour market relations have seen a specific development as well. In 2008, the employers’ side announced that it did not want centralized income policies anymore. This was followed by a period (2007-2011) of sectoral agreements, which, as empirical literature shows, leads to higher wage increases than central or local bargaining. In 2011 a leaner kind of centralized agreement was concluded, followed by the Growth and Employment Agreement of 2013, which featured extremely moderate wage increases. The core focus of that agreement was restoration of Finnish (export) competitiveness.

In the Finnish media the common way to talk about competitiveness is to talk about Finland’s competitiveness. Finnish daily Helsingin Sanomat has an entire collection on this topic here (in Finnish). This is something that perhaps follows logically from comparisons with other countries – in particular Germany’s export performance is often mentioned. But in the same way that a country is not a company, a country is not competitive. The firms in the country are or are not. It is interesting to consider why Finland is constantly rate high on competitiveness indexes but domestically the view of many key actors is that Finland is not competitive.

The reason why domestically politicians, employers’ and even employees’ representatives hold the opinion that Finland’s competitiveness has worsened is the very dominant focus on Finnish labour costs. This was apparent also in the Prime Minister’s speech and in many discussions about the “competitiveness jump” (kilpailukykyloikka) which previously was the 5% “productivity jump” which was proposed as needed to become competitive again. As one National Coalition Party representative states in the linked article, “We arrived at this number, because Finland has gotten 10-15% behind others in unit labour costs, and we have to close that gap. So the 5% goal is very significant.” In the Finnish econoblogs this goal has been ridiculed by a few, most notably Professor Pertti Haaparanta, who wrote a blog post called “the competitiveness jump has been jumped already” (“Hypyt on jo hypätty”). He argues that because of the moderate wage increases of the last collective agreements, the unit labour costs of Finland have declined already. Furthermore, he ponders whether the government’s policies would even have worked. More importantly, he questions whether there is any sense in these competitiveness goals. But Haaparanta is a minority voice in Finnish public debate. For example, bank economists like Aki Kangasharju, chief economist of Nordea Bank has called for the need to cut wages across the line, by 5-10% (although with some compensation through the incomes tax). Also Björn Wahlroos (investor) frequently indicates the need for making labour cheaper (although that is not enough by itself). In general, the Finnish discourse of the problem of Finnish weak economic performance is very focused on the growth of labour costs since 2008 and minority views are weakly represented in the media. Hence, political discussion – and the disagreement with the labour movement – has centered on reducing unit labour costs.

The problem is, though, that unit labour costs are not a good measure of competitiveness. In this article, Dutch economist Merijn Knibbe sums up seven methodological/technical reasons why ULC is a very unsuitable measure of competitiveness. In the context of the Finnish economy, the significance lies in the sectoral difference in unit labour costs. For example, construction and services have relatively high unit labour costs, but export industries like oil refineries or the paper industries have much lower unit labour costs. In recent years, the export industries have experienced headwinds because of weak (European) demand and also the sanctions on Russia. This means that in the aggregate, it appears that unit labour costs are rising, because industry provides less value added and e.g. services more (in terms of shares). So if we are interested in Finnish competitiveness, it is really necessary to look at the sectoral level and preferably at the firm level.

This is also exactly the reason why the services sector union PAM is so very upset about the current government plans. The services sector work according to a different logic of competition and is very dependent on domestic demand. This implies that the intended measures to reduce the unit labour costs will weaken employees in services, who in majority are female. They also earn less than employees in industry and typically experience more temporary and part-time work. At the same time, according to Statistics Finland, the services sector accounts for the largest share of value added in the Finnish economy, in addition to employing the largest share of the working population.

Dr Paul Jonker-Hoffrén is a post-doctoral researcher in Sociology at Turku Center for Labour Studies (Finland) with main interests of industrial relations, competition policy and economic policy in the EU. He writes Arjenpolku blog.