Monsters in the Mist: The Elusive Quest for Financial Security in Scotland post-Brexit

By Faye Donnelly and William Vlcek 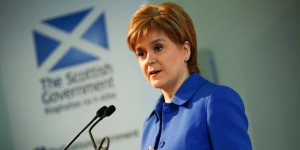 It is easy to become disillusioned, confused and even fanciful when trying to envision Scotland’s financial security in the aftermath of the Brexit vote. With a leap of imagination it is possible to conceive that there is now a higher probability of seeing the Loch Ness monster than there is of seeing any constructive resolution to the decisive vote emerging on the horizon. At first glance this assertion sounds like a fictitious rumination. Yet analysing the different stories that have surfaced about where Brexit leaves Scotland one quickly finds that they are rife with mystery. This blog argues that the complex discursive performances enacted since 23 June 2016 take on a particularly elusive quest when it comes to what financial security means for Scotland going forward. Akin to the Loch Ness monster, different actors have reported sightings. These vary from plots of the SNP canvassing for a second independence referendum to audacious acclaims of Scotland fighting to retain their membership in the European Union (EU). Let’s take a closer look at the ability of Scotland to synchronise these competing agendas.

With Scotland voting 62-38% to remain in the EU, the resurrection of independence as a political agenda certainly appears to have taken on a new lease of life with calls for ‘indyref2’. Speaking on 27 June 2016, First Minister of Scotland, Nicola Sturgeon, emphasised, “a second independence referendum is clearly an option that requires to be on the table and is very much on the table.” Stepping up efforts to ensure that Scotland’s interests are defended amidst post-Brexit negotiations the SNP party leader characterised Theresa May’s assurance that “Brexit means Brexit” as “a soundbite that masks a lack of any clear sense of direction”. At the same time, Sturgeon has indicated a willingness to participate in ‘engaged talks’ with the new elected UK Prime Minister. An easy explanation behind this discursive oscillation is that Scotland will need permission from Westminster to hold another referendum. What is also plain is that there must be public confidence in the prospect of an independent Scotland being financially secure, something that the latest YouGov polls figures have called into question. Elsewhere opponents to ‘indyref2’ are highlighting that the economic goals for an independent Scotland that appeared possible in 2014 (with oil at $100/barrel) have vanished (with oil hovering just below $50/barrel). Consequently, the projected political economy for an independent Scotland today forecasts either tax rises in order to maintain current public services or a reduction in the provision of those services. Faced with this reality Sturgeon has stopped short of demanding another independence referendum, in part because it is not clear that financial security lays at the end of that path.

Much of the talk of ‘indyref2’ is reliant upon another anchor of financial security for Scotland sailing forward, Europe. Outlining in progressive terms that, “Scotland had voted differently in this Referdum to the UK as a whole”, Sturgeon maintained that, “everything must be on the table to protect Scotland’s place in Europe”. In tandem, she has also expressed a clear commitment to ask the Scottish Parliament to block the passage of legislation necessary for the UK to leave the EU. There are several reasons why Europe has become a beacon of hope for Scotland in the turmoil unleashed by Brexit. First, the financial security of this country is inherently tied to the single market and the free movement of labour. Maintaining this competitive advantage requires that EU membership is preserved at all costs. Second, Scotland’s turn to the EU represents a sense of shared vision on how governments should manage an economy. In opposition to the austerity policies administered by Westminster since 2010, the EU projects an ethos of approval for social democratic interventions in the economy. The latter vision, however, does not recognise the austerity measures imposed on some Eurozone state – Cyrus, Greece, Ireland, Portugal and Spain. While these ideas have attracted interest, the pursuit of continued EU membership may be fanciful given that Europe might not allow Scotland to remain or become a new member. Spain has already voiced opposition. It would also be foolish to overlook that any form of uninterrupted EU membership is not a magic bullet since the UK-EU Brexit negotiations have to be completed before any form of negotiations between Edinburgh and Brussels begin. These obstacles and risks cannot be overlooked when it comes to ensuring financial security for Scotland.

Despite the interrelated network of ideas materialising post-Brexit, ranging from ‘indyref2’ to the EU, uncertainty is continuing to spread. Taking a critical step back what becomes more and more apparent is that the language of financial security may prove to be as mystical as any monster in the mist. To paraphrase Jonathan Kirshner it is, ‘what you think it is’ ‘it is power’ and ‘it is politics.’ Against this background, the ultimate concern of those interested in finding financial security for Scotland post-Brexit is perhaps to abandon the elusive quests underway for obtaining it. Instead they should be on the lookout for how the language of financial security is being co-opted by powerful leaders, bureaucratic experts and business elites to lend themselves authority and legitimacy (see Lanchester 2014). Failing to do so could strip ordinary people of their voice as well as their power to express their everyday concerns as events continue to unfold.

The simple fact obfuscated by all the mysteries around whether or not Article 50 will be triggered in 2019 is that daily life debates about financial security are currently dominated by concerns about pensions, interest rates, house prices and currency. Unsurprisingly as people scramble to reappraise their budgets months on from Brexit, they are less likely to be concerned with plans for Scotland to opt for a devolved arrangement that resembles a reverse blueprint of what Greenland negotiated with Denmark in yesteryears and more likely to be concerned with how to afford their everyday utilities. To different degrees these issues are interwoven, which, in turns creates another layer of uncertainty. For while some monsters have been gained and some lost along the way since the EU referendum in June, many more remain unidentified at present. Perhaps invoking the Loch Ness monster as a case point is an imaginative leap too far. Looking ahead towards the fluctuating negotiating window for Britain’s exit from the EU, nonetheless, the benefits of invoking this myth is that it may enables us to recall that financial security is a glorious impossibility. As Susan Strange wisely reminds us, “uncertainty, as we all know, is meat and drink to markets”. Linked to this observation, an important lesson to learn from the Brexit fallout is that financial security is not a given but a carefully scripted narrative. For that reason, the outlook adopted in this blog hints at the need to render existing stories more fragile and less self-evident than they otherwise appear.

Note: This article gives the views of the author(s), and not the position of the Euro Crisis in the Press blog nor of the London School of Economics.

Faye Donnelly is a Lecturer in the School of International Relations at the University of St Andrews.

William Vlcek is a Lecturer in the School of International Relations at the University of St Andrews.

This entry was posted in EU ref, United Kingdom and tagged Brexit, EUref2, financial stability, Nicola Sturgeon, Scotland, Scottish independence, Scottish referendum, SNP, Theresa May. Bookmark the permalink.
We use cookies on this site to understand how you use our content, and to give you the best browsing experience. To accept cookies, click continue. To find out more about cookies and change your preferences, visit our Cookie Policy.