The post-mortem is now well under way and the general consensus seems to be that those who voted leave were gullible fools led astray by a combination of a partisan press and slick political operators selling a particularly potent brand of snake oil, one part false promises, two parts undiluted bigotry. Notwithstanding the quality of the overall political debate around Brexit (it was awful on both sides), such a view might make Remainers feel better about themselves but offers little in making sense of what actually happened last Thursday and why. 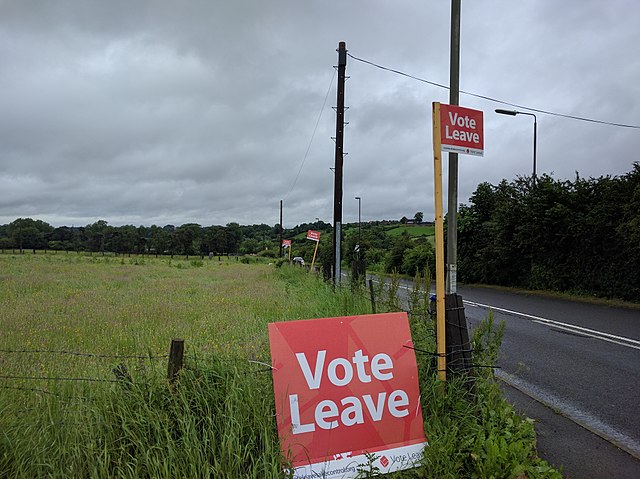 In the lead up to the vote, there were very few who actually got what this was about. John Harris of the Guardian was one of them because he actually bothered to tour the country and talk to people in unglamorous places like Nuneaton (66% Leave), Barking (62% Leave) and Hartlepool (70% Leave). On Wednesday he wrote:

Even those who understand that something seismic is afoot among predominantly working-class voters are still too keen on the idea that they are gullible enough to be led over a cliff by people with whom they would actually disagree, if only they knew the facts. But most people are not really being “led” by anyone. In my experience, Farage, Boris Johnson and Michael Gove et al are viewed by most people with as much cynicism as the people fronting the remain campaign.

What is now happening … in the UK underlines a tangle of other stuff – to do with culture, belonging and community – that is going to require a completely different level of response.

I think Harris is right on all counts but it’s his nod to ‘culture, belonging and community’ that I want to briefly focus on here. For while the disconnect between ‘ordinary’ people, notably those in the former industrial heartlands that Labour used to consider it’s own, and politicians has been extensively discussed, this ‘tangle of other stuff’ has been somewhat neglected, often reduced to accusations of racism and xenophobia. Now, of course, this isn’t to condone physical or verbal attacks on the basis of skin colour, religion, accent or language but unless we understand what people are telling us about their own lives we aren’t going to get very far in changing things for the better.

The point that needs to be made is that those voting leave were not only railing against an elite that they considered to be distant and disinterested but also, in the process, reaffirming their commitment to the nation and a national order of things. For many on the Remain side, nationalism continues to be seen as a poisonous ideology largely associated with far-right politicians and football hooligans. Likewise, the European project is seen by them as an antidote to such expressions of bigotry and violence. The problem with such a view is that in simply reducing nationalism to extremism, we risk overlooking why nations continue to matter to so many people, including a good number of those who voted Leave.  Simply put, national frameworks continue to offer a point of anchorage – a sense of identity, continuity, community, place and belonging – in an increasingly complex and threatening world. Similarly, for those who see themselves at the heart of national culture and territory, the nation provides a sense of status (I belong here) and power (I should be able to say what goes on here) where other forms (notably for men) have been increasingly eroded e.g. work, class, locality.

The sociologist Jonathan Hearn has written that ‘national identities, like all identities, are rendered salient when they seem to address personal issues of power over one’s own life”. At the moment, people in Britain, but in England in particular, are feeling a loss of control and a sense of anxiety that is palpable. In response to this they are drawing on a form of identity/community that, at least, gives them a way of making their own lives meaningful. We don’t have to like the fact that sometimes this leads to outbursts against migrants or boorish behaviour in the streets of Marseilles. And, to repeat, trying to make sense of such behaviour doesn’t mean condoning it.

But if we are really serious about trying to offer new political solutions and ways of imagining and being in the world, it means first trying to engage with people and not simply sneering at them when they happen to make choices we don’t agree with. It also means getting a bunch of better narratives about who we are and where we’re going than the current lot have been peddling for the last two decades. In Britain this not only means making the political system more responsive (ditching FPTP and moving towards genuine devolution for the regions and cities) but offering a narrative of (national) community that is forward looking and acknowledges Britain’s current place in the world rather than continually banging on about the past. Britain is a small island in Europe. It once had an empire and its men and women (including those in the Commonwealth) made an important contribution to the overthrow of fascism in the 20th century. Now, it punches above its weight when it comes to culture and science, but the world has moved on, whether it comes to military power, economic output or (whisper it) football.

Like the howls of rage from across the Atlantic, the slogan ‘we want our country back’ is only too easy to dismiss if you’re sitting (relatively) comfortably in a sleek office or coffee shop in London, Paris or Oslo. Unfortunately, the ‘stuff to do with culture, belonging and community’ is far too important to be left to the likes of Farage, Johnson and Trump.

Dr. Michael Skey is a Lecturer in Communication and Media Studies at Loughborough University. His monograph entitled ‘National Belonging and Everyday Life’ (published in 2011 by Palgrave) was joint winner of the 2012 BSA/Phillip Abrams Memorial Prize.