We’ve triggered Article 50. Is this such a tragedy for Europe?

It is now possible that new governments in France and Germany will respond to civil society pressure and do what is needed to change the EU, without being blocked by Britain.

This is a very sad day for Britain. There is still a possibility that it can be reversed if parliament and the country get a vote on the final deal. But if it does go ahead, among the consequences we can expect are: 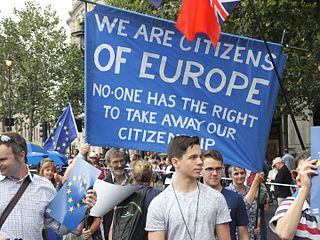 Perhaps the only silver lining might be the decline of the City, which is responsible for the tendency of British governments to express overweening ambition and to neglect the needs of the poor in this country, even though it will also mean big job losses not only in London.

What does this leave our European neighbours?

But is Brexit also a tragedy for the rest of Europe? On the one hand, many worry that the UK offers an example for other parts of Europe and for populists everywhere, and that this is the beginning of a disintegrative process akin to the fall of Yugoslavia. They might be right.

On the other hand, it is possible that the kind of changes that need to be made if the EU is to survive might be more likely without the obstacles that Britain tends to pose to further integration.

First, it is worthwhile pondering the nature of populism. It can be argued that since the financial crisis of 2008, the US and the UK have become rentier states, somewhat similar to oil states in the Middle East. Rentier states are ones which depend on external revenues rather than taxation. In such states, the political class no longer depends on a social contract with the population; their main interest is gaining access to the resources of the state and they are ready to use any kind of trick in the book to win elections.

They do not have to worry about growing inequality or poverty as long as they can win elections. Central European countries like Hungary and Poland are rentier states that depend on EU structural funds; even though they rail against the EU for domestic political purposes, they would never actually leave the EU because they would lose their sources of revenue and of patronage. The irony of the Brexit vote is that those who wanted to take back control are those most likely to lose control.

The US and the UK governments are increasingly dependent on global finance as a source of revenue and this may explain their rentier character and the rise of populism. By populism, I mean the appeal to the disenfranchised on the basis of scapegoating migrants or Muslims or foreigners and the disregard for truth, expertise or reason. Neoliberalism never went as far in west European states. They still depend on a social contract and, despite large-scale unemployment, they still have welfare states. That means that political debate still to a large extent involves argument, deliberation and substance rather than populist slogans; this is even true of the Netherlands and France despite the rise of populist parties. I may be proved totally wrong but I have some optimism that these states, even France, will not succumb to a similar type of populism.

Secondly, Brexit may turn out to be a wake-up call for the EU. Many civil society groups who were concerned with single issues or with opposing neo-liberalism are increasingly preoccupied with Europe. Activists from the group Pulse of Europe take to the streets in towns across Europe every Sunday. Large pro-European demonstrations took place on March 25 – the 60th anniversary of the Rome Treaty.

The EU needs reform and the most important reform is social; the EU needs to abandon austerity policy and to develop fiscal mechanisms that will make possible largescale social redistribution across Europe. The introduction of the euro was associated with neoliberal policies that contributed to big economic disparities across Europe and to growing precarity for the poorest people.

The EU needs to be able control financial speculation and find ways to tax those who evade taxation through crossing borders. This is the only way the euro can be saved; otherwise sooner or later, there will be another euro crisis that will make all the dire predictions of disintegration come true. Saving Greece is emblematic of what needs to be done to save the euro and reform the EU. Is it possible that new governments in France and Germany (led by Macron and Schulz) will respond to civil society pressure and do what is needed without being blocked by Britain?

Thirdly, could Brexit usher in a new type of individual citizenship? As citizens of the EU, British citizens have the right to move and reside freely within the EU, to vote for and stand as a candidate in European parliamentary elections as well as in local municipal elections across the European Union, to be protected by the diplomatic and consular services of any other EU member states, as well as a range of rights concerning petitions to European institutions, access to the EU ombudsperson, or EU documents. A proposal to allow individual citizens to retain their European citizenship whether or not Britain leaves the EU in return for a membership fee or tax has already been put forward in the European parliament and has been taken up by the negotiator on behalf of the parliament, Guy Verhofstadt. The main objection is reciprocity; surely European citizens should have the same rights in Britain?

All these are huge ifs. The point of this argument is not to suggest that it is better for Europe if Britain leaves. Rather it is to suggest that those of us in Britain who want to hold on to their European identity should strongly support the potential for European reform and maybe just possibly, this will reverberate in this country, shifting opinion about the European Union and opening up a reversal path. It is about trying realistically to identify those possible directions that could reduce the more dire consequences of Brexit.

The irony of the Brexit vote is that those who wanted to take back control are those most likely to lose control. In our globalised interdependent world, taking back control turned out to mean giving control to a small right wing clique who want Britain to become a safe haven for mutlinational corporations to the total neglect of the young, the underpaid and those who live in large parts of this country. Those of us in Britain who want to hold on to their European identity should strongly support the potential for EU reform – maybe, just possibly, it will reverberate in this country.

The only way to take back control is through European efforts to regulate and control the worst aspects of globalisation (climate change, financial speculation, closing mutlinational tax havens, addressing conflicts) so as to enable people at local levels to participate meaningfully in politics. There is also a generational irony. Those who voted for Brexit were determining the future of a younger generation with very different hopes and aspirations.

President Trump and the Politics of Tragedy

1 Response to We’ve triggered Article 50. Is this such a tragedy for Europe?