English local elections on 3 May take place as migrants might be finding a less divided political voice than at any time since the vote in favour of leaving the European Union (EU). The 2016 Referendum created deep uncertainty about the rights and prospects of more than three million EU citizens living in the country. Yet others were attracted by arguments that leaving the EU might bring opportunities to strengthen Britain’s ties with Commonwealth countries. The Leave campaign actively fostered this impression in the battle for votes. Priti Patel famously announced a “Save the British Curry Day” and argued that “[by] voting to leave the EU we can take back control of our immigration policies [and] save our curry houses.” Keeping out the Europeans, it seemed, would create more space for migrants from former colonies. 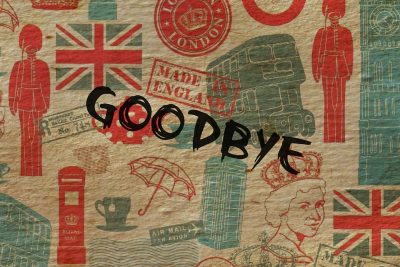 This was always unlikely. As Simon Hix, Eric Kaufmann and Thomas Leeper show, UK voters, including Leavers, care more about reducing non-EU than EU migration. Instead of a new openness towards Commonwealth countries, the Windrush scandal highlights their role at the very centre of the government’s efforts to reduce the number of migrants in Britain. Over the past months, the Guardian has published a string of harrowing stories of deportation, destitution and denial of critical medical treatment resulting from Theresa May’s infamous (and now rebranded) “hostile environment” policy for illegal immigrants. The policy initially appeared to claim predominantly black victims among long-term residents with migration backgrounds who Amber Rudd’s Home Office, in pursuit of ambitious removal targets, deemed unable to document their status. Now the scandal is spreading to non-Caribbean Commonwealth-born citizens. This shameful treatment heightens anxiety about their prospects for migrants in general.

The local elections afford many migrants a formal opportunity to make their voices heard. Under Britain’s electoral rules, citizens of Commonwealth and EU countries who are resident in the UK are eligible to register to vote in certain UK elections. While EU nationals have no voting rights in parliamentary elections (and could not vote in the 2016 Referendum), they do have voting rights in local elections. Nowhere in Britain does this matter more than in London. The 2011 Census counted more than three million Londoners who were born abroad, out of a total of 8.2 million. Yet surprisingly little is known about the voting behaviour in particular of EU migrants in local elections. Later this year, Elena Pupaza, a doctoral researcher at the LSE, and I will publish results from a study that sheds more light on this neglected aspect, but here is a first glimpse of an interesting pattern.

According to ward-level data from the 2011 Census, about a quarter of the population in the median London ward was born in a Commonwealth or EU country. The flagship Tory-governed boroughs of Westminster and Wandsworth have similar numbers. There is a negative relationship between the share of these migrants in the population and levels of support for the Conservative party across London. This is illustrated in the figure below that plots the relationship using ward-level data from the 2016 London election. The fitted line shows declining Tory support in a ward as the share of EU and Commonwealth migrants increases. At the same time there is substantial variation, which suggests that voting patterns among this heterogenous group, as well as of other voters living in a ward, are more complex than this simple perspective can reveal. 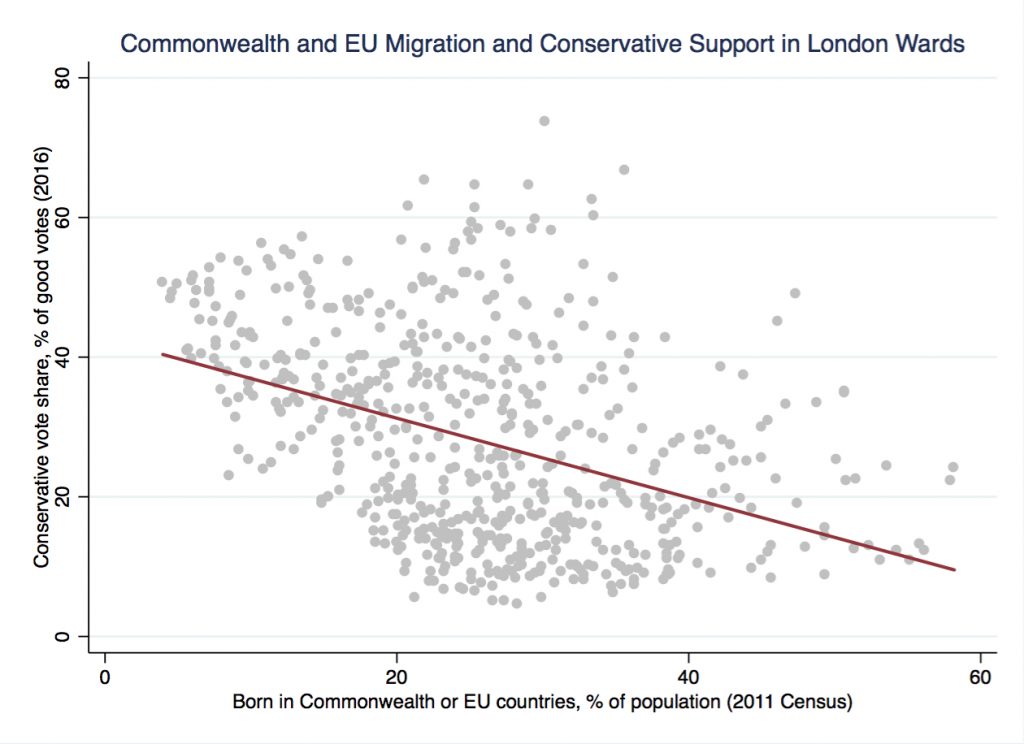 What this historical pattern means for Thursday’s election will partly depend on the turnout of registered migrant voters. Have they become disillusioned, or will Brexit and the Windrush scandal motivate them to cast a ballot? The Conservative party is unlikely to have gained support among migrant voters, so with significant participation they could play a crucial role in the more contested wards and boroughs. The question then is who they will support. The Liberal Democrats in particular have been targeting EU voters, but historically other parties have profited more from the presence of migrant populations.

In the longer term, much depends on the voting rights of migrants going forward. Those of EU migrants in a post-Brexit Britain, which Rob Ford discusses in an insightful piece, are uncertain. Historically few EU migrants have sought to acquire British citizenship and the wider voting rights this entails, but this is rapidly changing. For some Commonwealth migrants in particular, one challenge may come from the introduction of voter identification measures piloted in these elections. Rightly condemned by the Electoral Reform Society, ID requirements are notorious in the United States, where they have been used in deliberate attempts to manipulate elections by depressing the participation of minority voters.

For some, these local elections are predominantly about potholes, parking and fly-tipping, but others may see a first chance to use their electoral voice following the 2016 Referendum. The results from London boroughs in particular will offer an indication of whether and how migrants might use their voting rights to engage in Brexit Britain’s politics.

Note: This article gives the views of the author, and not the position of the Euro Crisis in the Press blog nor of the London School of Economics.  It has concurrently appeared on the LSE Brexit blog.