Rape and Sexual Violence in War: The Vexing Issue of Causation and Some Reflections from Bosnia

Rape and Sexual Violence in War: The Vexing Issue of Causation and Some Reflections from Bosnia

Refugees; Srebrenica; the siege of Sarajevo; burning villages such as Ahmići and Stupni Do; the Omarska camp. Captured in these words are some of the most powerful and lasting images of the 1992-1995 Bosnian war. Media cameras captured many of the crimes committed in this bloody conflict. In contrast, one particular set of crimes typically occurred behind closed doors – in homes, camps and other places of detention. These crimes could not remain hidden, however, and more and more reports began to emerge of mass rapes occurring. The Bosnian conflict significantly contributed to raising international awareness of this persistent scourge of war, and 21 years on there have been huge developments in this field. Most recently, on 21 March 2016, the International Criminal Court (ICC) issued its first conviction for rape against Jean-Pierre Bemba Gombo, the former Vice-President of the Democratic Republic of Congo. While important progress has been made, we still do not know enough about the reasons why rape frequently accompanies warfare. It is a highly useful weapon of war but, as this post will show, this is not the whole story.

Rape Causation and the Bosnian War

I recently spent a year in Bosnia-Hercegovina (BiH), as part of a Leverhulme Research Fellowship. My research was focused on the long-term effects of rape and sexual violence. I wanted to speak to survivors and to understand how their war trauma continues to impact on their lives today. Issues of causation, however, unexpectedly found their way into my research. I interviewed 79 male and female survivors of rape and sexual violence – Bosnian Muslims, Bosnian Serbs and Bosnian Croats – across BiH. While some of them glossed over the war and wanted to speak only about their current problems – including health issues, financial concerns and relationship difficulties –  others told their stories in a highly detailed way that implicitly suggested possible causal factors underpinning rape. Published in the journal Ethnopolitics, my most recent article – ‘Untangling Rape Causation and the Importance of the Micro Level: Elucidating the Use of Mass Rape during the Bosnian War’ – seeks to provide a bottom-up explanation for the widespread use of rape in the Bosnian conflict. Specifically, it explores and analyses five key causal factors that emerged from the interview data, namely (i) a desire for revenge, (ii) opportunism, (iii) a desire to humiliate, (iv) group dynamics and (v) a sense of ownership. None of these factors are unique to the Bosnian war, but my article explores how they operated within the specific micro context and conflict dynamics of that war. This is important because explanations of rape in conflict are often very general with a focus on broad structural factors such as patriarchy, militarism and gender relations. Such explanations can help to elucidate why rape occurs in war, but are far less effective in explaining why rape occurs in a particular war.

Rather than discussing all of the five causal factors that emerged from my interviews, I want to focus on three of the most significant findings. The first relates to the issue of revenge. Historically, probably the best-known example of revenge-fuelled rapes occurred at the end of World War II when Red Army soldiers marched through Nazi Germany and sexually violated thousands of German women, in part as ‘pay-back’ for the crimes of the Third Reich. During my fieldwork in BiH, I identified three key types of revenge. The first was personal revenge, meaning that an individual was raped as an act of revenge for something that s/he had done. Such cases, however, were extremely rare. In contrast, the second and third variants – namely mirroring and event-triggered revenge – were far more common. In cases of mirroring revenge, groups of soldiers claimed that by committing rape, they were only doing (i.e. mirroring) what their enemies were doing. Event-triggered revenge occurred when soldiers committed rape in response to developments within the conflict, and in particular to avenge war losses. That mirroring and event-triggered revenge emerged as important causes of rape in BiH is highly significant. Rape is frequently described as a weapon of war, due to the fact that its deployment can facilitate the realization of numerous war objectives, from displacing civilian populations to sowing fear and demoralizing enemy men. In situations where mirroring or event-triggered revenge underpinned the crime of rape, however, rape functioned less as a weapon of war than as a response to military developments on the ground. From this perspective, simply conceptualizing rape as a weapon of war is too narrow. Rape should be understood within the internal dynamics and shifting developments of individual armed conflicts, and this in turn underscores the importance of micro-level analysis that is sufficiently attuned to this fluidity and movement. Macro explanations of rape, in contrast, are typically highly static through their emphasis on structures.

Secondly, opportunism emerged as a key causal factor of rape in the Bosnian war. Many survivors explained that before they were raped, they were forced to hand over any money, jewellery or other valuables that they had in their possession. Similarly, in the aforementioned Bemba Gombo case, the ICC documented that members of Bemba’s Mouvement de libération du Congo (MLC) – whom he had sent to fight in the Central African Republic at the request of President Patassé – committed large-scale pillaging, often alongside acts of rape.  The ICC suggested that members of the MLC pillaged because they were not adequately compensated as soldiers and therefore chose to ‘self-compensate’. It did not, however, discuss the precise relationship between the MLC’s use of looting and rape combined. Similarly, it was unclear from my interview data whether soldiers’ primary objective was to enrich themselves, with rape occurring as an after-thought, or whether their main goal was to rape and they simply availed themselves of the opportunity to make money in the process. What is clear is that such examples further underscore that the dominant conceptualization of rape as a strategy of war is too limited. Soldiers may rape for reasons that have nothing to do with war strategy. It is precisely because of this that even within an individual conflict, acts of rape may take multiple forms – from those that appear highly organized and systematic to those that are more sporadic and spontaneous. That the Bosnian war exhibited a considerable variety of rape patterns problematizes the meta narrative relating to the conflict, namely that Bosnian Serb soldiers raped as part of a policy. This narrative provides a fundamentally incomplete picture of what was actually occurring on the ground. 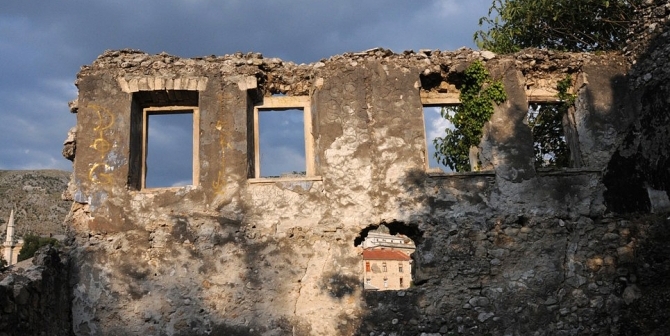 Thirdly, rape is inherently humiliating. It is a quintessential violation of individual autonomy that removes an individual’s control over his/her body. What emerged from my interviews with survivors, however, is that rape was often committed in a way that exacerbated this basic level of humiliation, resulting in a more aggravated form. Rapists achieved this aggravated humiliation in a variety of different ways, from verbally abusing their victims and raping women when they were menstruating to forcing family members – such as fathers and sons – to perform sexual acts on each other as soldiers watched and laughed. Higher levels of aggravated humiliation for the victim often meant increased enjoyment for the soldiers, who usually raped in groups. Humiliating victims functioned, for some soldiers, as a form of entertainment; their power and ability to make others suffer became a source of amusement and fun. Their victims thus became toys in their hands. Interestingly, when I think of many of the survivors whom I interviewed, the dominant image that comes to mind is of broken dolls. Some of them had got back up on their feet. Yet, all of them stressed that they would never be the person that they were before the war. Their sense of humiliation was particularly deep-seated.

What does all of this mean in terms of preventing rape and sexual violence in conflict? Can these crimes be prevented? Without sounding overly pessimistic, I would suggest that they cannot. Firstly, rape occurs for a multitude of different reasons, macro and micro, which makes it practically impossible to eliminate its causes. Secondly, what my fieldwork highlighted is that war itself, in its every-changing shifts and fluctuations, provides reasons for rape. Hence, as long as wars occur, it is difficult to imagine an end to conflict-related rape and sexual violence. At best, we can try to minimize the frequency with which these crimes occur by, for example, working with armies, engaging with non-state actors (such as militias) and reinforcing the message of no impunity. Ultimately, however, what is most critical is to ensure that survivors have the essential help and support that they need, particularly in the long-term. Their needs do not end when the guns fall silent. Over and over again, survivors in BiH told me that they feel forgotten and abandoned.

Janine Natalya Clark is a Senior Lecturer in International Criminal Justice and Transitional Justice in the School of Law at the University of Birmingham. Her research interests include sexual violence in conflict, international criminal courts, genocide, ethnic conflict and reconciliation. She has been conducting fieldwork in the former Yugoslavia since 2002 and has published extensively. Her second book examined whether the International Criminal Tribunal for the former Yugoslavia has contributed to inter-ethnic reconciliation in BiH, Croatia and Kosovo. She is currently working on her third book, focused on the long-term effects of the mass rapes committed in the Bosnian war.

Bad Behavior has blocked 377 access attempts in the last 7 days.