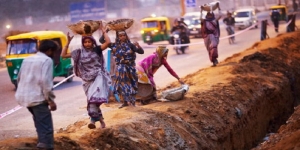 While cities have always been designed for men, urban development is treated as a gender-neutral domain. In October, representatives from 195 countries participated in the Habitat III Conference and adopted the New Urban Agenda (NUA) on sustainable cities and human settlements. The conference was particularly significant this year as it finally addressed the much-ignored gender dimension in migration and urbanisation at a time when forced migration and expansive urbanisation have become issues of growing global concern. It marks an important step in the direction of gender-inclusive urban planning. However, it remains to be seen how this development will impact the policy environment in populous, developing countries with burgeoning cities.

It is estimated that the global proportion of urban dwellers has gone up from 42% in early 1990s, to more than 54% today. This percentage is expected to soar to 60% in 2030.While it must be acknowledged that women are not a homogenous group and several factors intersect to shape their individual experiences, gender plays a decisive role in urban migrants’ vulnerabilities and cities are perceived and experienced differently by men and women. Traditional gender roles continue to restrict women to the private sphere and gender dimensions interact with built environments in ways that impact quality of life, aging, wellbeing, energy, climate, inclusion, and transportation.

An estimated 814 million Indians will be living in urban areas by 2050. This haphazard growth can be deeply exclusionary. Studies on spatial inequalities in India repeatedly demonstrate that rural to urban mobility seldom translates into social mobility and spatial segregation by caste and religion is becoming increasingly visible in Indian cities. Studies also indicate that the proportion of women within the urban population is growing, and there is a concentration of women-headed households in urban centres. Given the intersections between class, caste, and gender in India– especially in terms of violence and access and control over resources – this situation is concerning and calls for more gender-sensitive policy approaches.

Male-centric Design: Gender-neutral approaches to cities in India cater primarily to men and perpetuate traditional gender-hierarchies. For instance, women may choose to avoid public transportation due to poor conditions, instead choosing to spend more time and money for safer mobility. Further, the lack of adequate sanitation facilities in cities remains a major issue. For instance, in the city of Mumbai in India which has a population of 22 million, only one-third of the approximately 11,000 pay-to-use public toilets are for women. Therefore, gender mainstreaming in urban development is essentially about developing cities that respond equally to men and women.

Safety and Security: According to a 2015 small sample survey, 60% of the female respondents in New Delhi said that they feared leaving the house alone. Similarly, 62% of the respondents felt that women’s safety in Delhi has not improved after the brutal 2012 gangrape that resulted in spontaneous public protests. It would, however, be wrong to categorise the gendered fear of public spaces as problem largely restricted to developing countries with unplanned urbanization. According to a study by the National Institute of Statistics and Economics,1 in 4 women in France are afraid to be on the street fearing sexual harassment. Equal and safe access to public spaces is therefore, a global concern – one that is further exacerbated in the context of rapid urbanization and urban migration.

Climate change: Environmental change is likewise an identified driver of rural to urban migration. The inter-relationship between climate change and gender is well documented – climate change tends to exacerbate existing gender inequalities, and gender inequalities lead to women facing more severe negative impacts than men. In Indian cities, informal settlements and migrant clusters are most vulnerable to climate impacts. New female inhabitants of these settlements – who are responsible for a disproportionate portion of the domestic labour – are more vulnerable due to limited access to services and infrastructure. Government-generated welfare schemes, for instance, often require excessive documentation such as proof of address, proof of identify, and birth certificates of minors. In absence of these, and often combined with relatively lower rates of literacy, women from informal settlement – who are often the head of the household – are unable to access subsidized food, housing, drinking water, sanitation as well as public health facilities, education and banking services.

On the other hand, while women may be more vulnerable to the negative impacts of unplanned urbanization, cities also offer robust opportunities for overcoming existing inequalities. For many women, migration to cities results in greater independence, better opportunities for paid employment outside the family andless rigid social norms. Therefore, women’s right to cities, an enabling environment, and equal access to opportunities within them must be prioritized by governments.

The integration of an urban policy approach that recognises gendered vulnerabilities, incorporates women’s equal right to safe spaces and makes use of their potential as change-makers can lead to sustainable and inclusive development. However, women have traditionally been excluded from city development. Less than 5 percent of cities across the globe are led by women. In India, where the representation of urban planners per 100,000 people is exceptionally low, at just 0.23, the need for women’s voices and representation in urban planning processes as well as in urban local decision-making is even more pronounced . It must be recognized that this lack of women’s political agency, and ambivalence towards other minority gender groups, is a major impediment to designing inclusive cities.

Evaluation of the NUA and the way forward

The New Urban Agenda (NUA) helps strategize the implementation of the Sustainable Development Goals (SDGs) by “improving the spatial configuration of cities and human settlements in a gender-inclusive way and by recognizing the crucial dimensions of women’s rights.” The NUA advocates participatory age- and gender-responsive approaches at all stages of the urban-territorial policy and planning processes, including in conceptualization, design, budgeting, implementation and evaluation. With several references to gender responsive measures, the conference has managed to place gender equality high on the agenda in the urban development context.

However, while the NUA is a step in the right direction, it is certainly not sufficient. The NUA, like the SDG more generally has set lofty targets but does not provide concrete solutions to achieve them. In addition, like the SDGs, the NUA is non-binding. It is therefore up to the stakeholders to recognize its urgency and promote inclusive sustainable development. While there have been examples of several successful initiatives for inclusive urbanization in India in recent years, these have remained scattered. The short-term cycles of state and central politics often obstruct the long-term vision and policy environment required for the development of sustainable cities. Additionally, the division of responsibilities, and congruent mandates between different national, state and local government bodies can be accompanied by friction, and redundancies that limit the development processes. The NUA fails to address these recurring conflicts.

Moreover, the NUA makes no progress on recognizing the rights of the LGBT community – which are not mentioned in the document even though the community faces special challenges in accessing and enjoying public spaces. The concept of the ‘right to the city’ — which is about every individual’s right to occupy, engage, and use the city for economic opportunities — must be implemented more fully. It has to take into consideration the operational limitations in overpopulated developing countries, and be conducted so as to include dimensions of gender as well as that of sexuality. As such, India must invest in gender-sensitive policies, and participatory planning that considers the concerns of all marginalized sections in urban spaces and the gender groups within them. In this way, mainstreaming gender in urbanization will not simply be about women, but it can be a useful tool in understanding and tackling exclusionary growth and limited access to resources in urban spaces more generally. Finally, the long-term political commitment required for designing sustainable cities must be prioritized within the domestic agenda for the NUA to be a success.

Vidisha Mishra is a Junior Fellow at the Observer Research Foundation, New Delhi, India where she works on Gender and Sustainable Development. She completed her master’s degree in Gender and Development from the London School of Economics and holds a bachelor’s degree in Politics and International Studies from the University of Warwick. Vidisha is also part of the UN Working Group on Youth and Gender Equality for the Commission on the Status of Women 2016.

Bad Behavior has blocked 343 access attempts in the last 7 days.