A victory for Labour’s left-wing women

A victory for Labour’s left-wing women

Labour’s left-wing women have long been side-lined by the party and by the media. Having refused to engage with the Blairite agenda of the Labour Party from the end of the 1990s, these women received little media attention. This is despite having spearheaded a number of notable campaigns, for example, the London Schools and the Black Child initiative and community-led climate change lobbies. Following Jeremy Corbyn’s election as leader, left-wing women such as Dianne Abbott and Emily Thornberry found themselves for the first time in Labour’s shadow cabinet. Far from receiving a warm reception, or even a political platform, these women were considered ‘wrong’ for Labour. The focus of this piece will be on Emily Thornberry and Diane Abbott, as they have featured most heavily in recent media analysis due to their positions as Shadow Defence Secretary and Shadow Home Secretary.

For a substantial period of time in 2015, the media was fond of asking, does Jeremy Corbyn have a woman problem? He did not have a woman problem, but the media did have a Jeremy Corbyn problem. A media mission to discredit Corbyn was launched, and it hit the ground running when he elected his first shadow cabinet in September 2015. Corbyn placed women in his cabinet, but they were the wrong kind of women. He also placed them in the ‘wrong’ roles, and the fact only five women had ever held any of the great offices of state was presented as Corbyn’s problem, not Westminster’s. Corbyn prioritised NHS and education from early on in his leadership campaign, yet giving women education and health portfolios was considered ‘sexist’. Repeated reference was made to the credible female MPs who, by refusing to serve in Corbyn’s cabinet, had lost out to Corbyn’s left-wing friends; an ideological argument made by the moderates within the Labour Party. 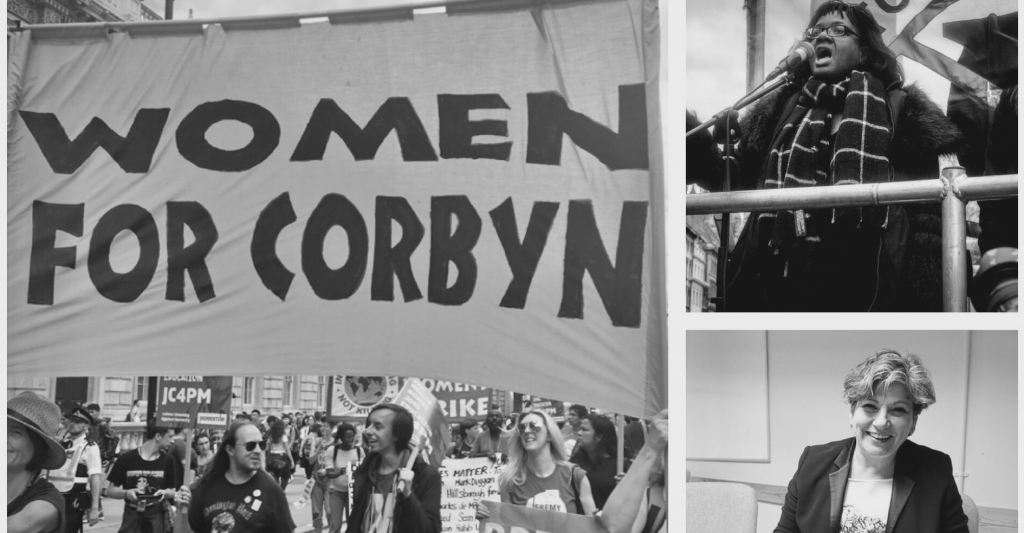 Here we can already see the contradiction. If top female figures in the Labour Party were refusing to serve in Corbyn’s cabinet before he even took office, there was something more at play than just gender politics. The suggestion that Corbyn was unable to recruit ‘credible’ female MPs is an oversimplification, and it glossed over ideological difference. Corbyn had placed his hard-left ‘close friends’, Abbott and Thornberry, into his cabinet and before these women even had a chance to achieve anything within the cabinet, they were labelled everything from ‘snobbish’ to radical. The press found Abbott a little more interesting when discovering her alleged fling with Corbyn, but again, this reveals more about the media and what makes a female MP ‘newsworthy’ than anything about her political integrity.

So, why were Abbot and Thornberry so ‘wrong’ for Labour? Again, one needs to look at the media tirade against Corbyn and his team. Their views were considered so left wing as to be contrary to women’s interests, with one female journalist suggesting they cared more about the rights of Palestinians and the poor than improved rights for women. Such criticism fails to take into account their voting records on welfare and benefits, issues which largely affect women. Both Abbott and Thornberry repeatedly voted against a reduction in spending on welfare benefits, including housing benefit. This was rarely discussed by the press, however, as reports that a number of female Labour MPs had received misogynistic abuse online was instead taken as further confirmation that left wing politics was ‘bad.’ Forget wider structural issues, the media made it clear that misogyny was Corbyn’s problem. Feminism became the battle cry of the right and centre-right news media, such as the Daily Mail and the Telegraph, who deployed feminist arguments to score political points. Corbyn received further criticism for ‘blanking’ the media and refusing to engage with accusations of sexism, but this says more about the relationship between politicians and the media, as opposed to Corbyn’s relationship with women. Female supporters of Corbyn hindered rather than helped the media’s project to discredit Corbyn, and so they were absent from such discussions. Indeed, while there is no denying that sexism has occurred at the hand of socialists, to consider women always victims of socialism is no more helpful.

This is not to say that socialism and women haven’t had an uncomfortable relationship over the years. Socialism has long been considered the preserve of men. Indeed, Labour Party’s original focus was on the male unionized industrial worker, and there was little room left for women. Female Labour MPs in the 1960s and 1970s had to fight to put women onto the agenda. By the time of Blair’s election in 1997, the number of female MPs had doubled and the media was quick to declare it a watershed moment for feminism. Exactly what type of feminist victory had occurred, however, was rarely discussed. Feminist writers have argued that a focus on descriptive rather than substantive representation has resulted in little policy change.When policies for gender equality were made, they were made against the backdrop of an economic case. This failed to recognize that a neoliberal economic paradigm sustained gender inequality. It was argued that a broader version of feminism was necessary which considered ‘gender rather than women, care as well as work, and equality in the private as well as public domain’. Put simply, we need to move beyond the ‘common sense of neoliberalism’. One only need to look at Abbott and Thornberry’s voting records to see that they are far removed from a neoliberal platform, and well placed to capitalise on anti-austerity politics.

Abbot and Thornberry were not new to politics; Abbott had been an MP since 1987, Thornberry since 2005. These women were, however, new to mainstream politics, and their views against trident and military intervention were condemned by MPs and the media alike. It was not just their views that were criticised, it was also their bodies. Abbott has been subjected to misogynoir, both racist and sexist abuse,  in the form of online and personal attacks. Despite this, she stayed true to her political beliefs and many now recognise that these women, spearheaded by Corbyn’s leadership, offered something that other Labour politicians didn’t, an alternative. While the media, noticing Corbyn’s gender, were quick to brand his supporters ‘brocialists’, it was his policies and his celebrity support (grime artists such as JME) ‘wot won it’ . Corbyn won support of 60% of female voters in the leadership election in 2015, increasing to 64% in 2016.In the General Election, more women voted Labour than men. Put simply, ideas matter.

Ideas also matter more than strength. During the General Election campaign, Thornberry and Abbott were on the frontline and they received media criticism for being human; forgetting figures, ‘reaching for a piece of paper to check figures’, and falling ill. A sign of a ‘new kind of politics’ was Corbyn refusing to condemn his colleagues for making mistakes, instead saying, ‘I’m not embarrassed in the slightest.’ This was in stark contrast to Theresa May’s attempt to position herself as a strong and stable leader, which reinforced gendered tropes that women must adhere to a masculine ideal of ‘strength’ to be taken seriously.

The media said Corbyn’s campaign was ‘in chaos’ following Abbot’s replacement as shadow home secretary. It turned out the media didn’t know best. Abbott won 75% of the vote in her seat, and increased her majority. One article quoted a banker that said, “I have spent a fortune expensively educating my kids and who do they go and vote for? Diane Abbott. The world’s gone mad.” She had apparently ‘risen from the ashes’, but many supporters had never doubted her credibility in the first place (for example, activist and journalist, Jack Monroe, who wrote an extensive blog post of her achievements). Thornberry, too, increased her majority, and received over two thirds of the vote in her seat. Like Corbyn, Thornberry has since been making the rounds of social media, being labelled the ‘Queen of Sass’ following an interview with BBC’s David Dimbleby. Following the increase in Labour’s vote share and the increase in Corbyn’s approval ratings, it is unlikely this public platform will disappear anytime soon.

Thornberry and Abbott were decisive players in the General Election campaign. Corbynism was the momentum behind their increased visibility during the campaign, but Abbott and Thornberry’s efforts played a decisive role in Labour’s success and as a result they have become household names. This is no mean feat considering they were labelled ‘irrelevant’ just two years ago. The women that were acceptable to the media and to the Labour Party prior to this election were moderate women, and this has now changed. Women are not homogenous, and neither is left wing politics.

An earlier version of this post first appeared on PoliticsMeansPolitics on 10 June 2017 and this amended and extended version is reposted here with permission.

Rosanna Hutchings is a former Gender, Media and Culture (MSc) student at LSE’s Gender Institute. It was here that she developed an interest in women and British party politics, and her dissertation was a gendered analysis of the media coverage of Jeremy Corbyn. She currently works at the women’s charity Girlguiding and is a campaigner for Renters Rights London.

Bad Behavior has blocked 309 access attempts in the last 7 days.