A proposal to increase restrictions on abortion in Poland generated several large protests across the country in early October, with the proposal ultimately being voted down in parliament. In this post, Magdalena argues that despite the apparent victory of the protesters, it remains likely that the government will nevertheless push for new restrictions on abortion.

On 3 October, more than 100,000 people in over 100 locations across Poland gathered to protest against proposed further restrictions to what is already one of the most restrictive abortion laws in Europe. The mobilisation received substantial international attention and support, and was hailed as a success by several commentators.

Most importantly, three days later the proposal was rejected by the parliament where the conservative right-wing Law and Justice (PiS) party holds a majority. Prepared by the Ordo Luris institute and entitled ‘Stop abortion’, the proposal called for a complete ban on abortions as well as for further restrictions on the availability of emergency contraception (with up to two years of imprisonment as a punishment for distributing the latter). Overall, 352 MPs voted to reject the proposal, 58 voted against it, while 18 abstained.

But despite this apparent victory for women’s rights in the country, the issue is far from resolved. On 12 October, Jarosław Kaczyński, the Chairman of Law and Justice, stated in an interview that: ‘We will aim to ensure that even in very hard cases, when the child has no chance of surviving, [or is] seriously malformed, there is delivery, so that the child can be christened and buried, [so it] has a name.’

If the ruling party did indeed take a step back due to the scale of the protests, if they listened to the women (and men) that took to the streets on 3 October, such comments, from the most powerful person in the country, suggest a desire to undo what has been achieved. And as much as the mobilisation of Polish women is both worthy of praise and significant in its own right, it needs to be understood within the historical and socio-political context of the abortion debate in Poland – even if such knowledge is bound to result in a dampening of enthusiasm among those campaigning for an improvement in women’s rights in the country.

Things can only get… worse?

Given the nature of the current debate, it is at times hard to remember that abortion for economic reasons was legal in Poland until 1993 when the so called ‘abortion compromise’ was signed. Since then, abortion in Poland is only permitted in three instances: if the life or health of the mother is in danger, if the foetus is seriously malformed, or if the pregnancy is thought to be a result of a ‘forbidden act’ (i.e. rape or incest).

Prior to 1993, abortion was also available for women in difficult life-situations. In 1992, over one million people signed a petition to hold a referendum on the matter of abortion. The initiative was ultimately ignored by parliament, despite the fact that over 72% of the population were in favour of having a referendum on the issue. According to the Central Statistics Office in 1992, 53% of Poles were in favour of an abortion law that permits pregnancy termination if a woman is in a difficult material or life situation and 29% were in support of making abortion available without restrictions.

If the matter had been put to a referendum it is possible that the rules in place at that time would have been maintained. As it transpired, the abortion ‘compromise’ referred to a deal between the government and the Catholic Church in Poland, rather than a broader compromise across society as a whole – some observers have suggested this ensured the support of the Church for Poland’s process of EU integration. Hence, the ‘compromise’ of 1993 and the recent developments in Poland stand as a reminder that rights are not given forever and that they can be taken away for political gains.

Considering the conservative basis of Law and Justice’s electorate, the party’s alliance with the Church is a significant source of legitimacy. Kaczyński’s statement can be understood in this sense as a response to the disappointment caused by the decision to reject the proposal to establish further legal restrictions on abortion. However, despite the heightened anxiety around the Ordo Luris’ project, the understanding has been that PiS is not in favour of an absolute ban on abortion and the project was thus politically uncomfortable for Kaczyński and his camp.

At the same time, having promised in the 2015 election campaign that civic initiatives will not be rejected at a first reading, PiS had no choice but to allow the proposal to enter parliament – though this did not stop a counter-initiative, ‘Save the women’, from being rejected at its first reading. The fact that PiS voted the way it did might be related to the protests, but considering it has ignored numerous protests that have been taking place in Poland since last year on other issues, it would perhaps be naive to assume that they were the decisive factor in this case.

Moreover, drafting an alternative framework, which remains committed to the idea that abortion should be permitted in two out of the three cases listed above, but states that it should be illegal when a foetus is seriously malformed, might be more in line with Law and Justice’s ideological position. The rise of a new idiom in the public debate ‘eugenic abortion’ suggests that might well be the case. Having rejected the extreme proposal of Ordo Luris, PiS has manoeuvred itself into a position where it can potentially frame its own project as another ‘compromise’.

The drop on the pro-choice side is significant, if we compare it to the data for 1992, but what is of importance in the present context is that the rise of ‘eugenic abortion’ as a new apparent threat in the anti-abortion debate might shift the balance in favour of further restrictions to the abortion law. If that happens, the pro-choice and feminist movements in Poland will once again be forced to fight for maintaining the status quo, in the face of yet another attempt to increase restrictions under the guise of a supposed compromise.

Polish politician, activist and writer, Władysław Bartoszewski used to say that ‘the truth does not lie in the middle, the truth lies where it lies’. In reality, the current abortion law was never a compromise and nor will any further restrictive changes to it amount to a compromise either. The protests that took place in early October remain part of a longer struggle for reproductive rights in Poland, a struggle that is characterised more and more by its defensive nature and one whose victory now feels further away, despite the apparent success of the protesters.

This piece first appeared on EUROPP on 18 October 2016 and is reposted here with permission. 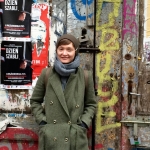 Magdalena Mikulak, member of our editorial collective, is a PhD Candidate at the LSE Gender Institute where her research is focused on religiously motivated sexual orientation conversion therapy and LGBT movements in contemporary Poland. Her research interests include sexuality, religion, post-socialism, LGBTQI activism, Central and Eastern Europe, social change and class.