Beyond Symbolism? The EU enlargement and Gay Politics

Beyond Symbolism? The EU enlargement and Gay Politics

On the occasion of the book launch of The EU Enlargement and Gay Politics: The Impact of Eastern Enlargement on Rights, Activism and Prejudice (edited by Koen Slootmaeckers, Heleen Touquet and Peter Vermeersch), Koen Slootmaeckers reflect on the contributions the book made to the growing literature on the Europeanisation of LGBT rights, and raises critical questions for future scholarship. 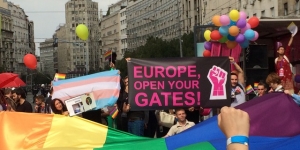 Over the last decade, lesbian, gay, bisexual and transgender (LGBT) people and their rights have become an ever more salient and controversial topic in international politics. In recent years, LGBT rights have become an important part of the EU enlargement process. In the context of the EU’s new fundamental first approach to accession process, LGBT rights have been declared in the 2013 Enlargement strategy. Moreover, the protection of LGBT rights and pride, in particular, have been used by EU actors to gauge the ‘Europeanness’ of candidate countries. For example, when the Belgrade Pride returned in 2014, Member of European Parliament Tanja Fajon said: ‘After three last-minute bans over the last three years, this year, the Serbian government will have the opportunity to right these wrongs. The values of tolerance and diversity that will be highlighted this Sunday are European, and Serbia fully belongs in Europe.’

A little over a decade since the first Eastern EU enlargement, we believe it is high time to analyse the impact of this process in the recent member states in Central Europe as well as to take stock of the lessons learned for the Western Balkans. In our recent edited volume, The EU Enlargement and Gay Politics: The Impact of Eastern Enlargement on Right, Activism and Prejudice, we and our contributors aimed to disentangle the symbolism from the actual advances on the ground and to determine more exactly the influence of the EU on LGBT rights in former or current ‘enlargement countries.’ In particular, we asked the following question: What is the impact of the EU enlargement on the political and legal contexts in which LGBT people live and claim rights?

Analysing the impact of the EU enlargement process on LGBT politics in Poland and Slovenia, the book, contributes to the body of literature examining the Europeanisation of LGBT rights by contextualising the impact of the EU within domestic politics. Both  of these case studies in the book have demonstrated that although the EU accession process can indeed shape the domestic political field in which LGBT activists manoeuvre, LGBT politics has never really Europeanized, i.e. advantages and backlashes in and against LGBT rights remain predominantly shaped by domestic political calculations. To illustrate, analysing 30 years of same-sex marriage debates in Slovenia, Kuhar and Mencin Ceplak, argued that domestic filtering of international norms on LGBT rights through the external and internal dynamics between parliamentary political parties in Slovenia share explanation for the delays and inconsistencies in the debates. Indeed, whilst early advances in the Slovenian same-sex partnership law was not used as a catalyst for or against EU accession, it was used as a part of a domestic political power struggle in an attempt by conservative forces to hijack the issue to serve its goals.

Also in the case of the Western Balkans, the book analyses how the EU accession process has contributed to advances in LGBT rights on the ground, whilst drawing attention to some of the unintended consequences of the process. For example, whilst the EU pressure has contributed to the return of the Belgrade Pride in Serbia, Bojan Bilic raises important questions regarding the event. In his chapter, Who’s Pride?, Bilic speaks to the more critical scholarship on EU enlargement and LGBT rights and argues that the EU’s current reliance on symbolic politics might negatively affect the goals of anti-discrimination it seeks to pursue. Such critical questions invite us to think about the future of the LGBT rights in the EU and its enlargement policy and introduce us to an important new research agenda – one that focuses on how to deal with the unintended consequences of EU pressure on the experiences of LGBT people in candidate countries.

In sum, the edited volume is part of the quickly developing literature on the interplay between EU enlargement and LGBT rights and hopes to invite critical thinking around the impact of the enlargement that goes beyond the symbolism of LGBT rights in European politics. It aims to draw attention to contextualise the role of the EU within the domestic political field and to move observers away from an overreliance on EU-centric frames on the study without completely discarding the opportunity structure created by the EU accession process.

All in all, we hope this book is to become part a much wider discussion on the European LGBT politics and how these play out in EU’s near neighbourhood. 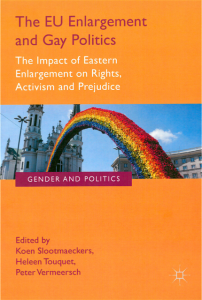 Koen Slootmaeckers is a PhD candidate at the School of Politics and International Relations, Queen Mary University of London. His doctoral research focuses on the impact of EU Accession processes on the LGBT movement in the Western Balkans, specifically Serbia. Koen is also a research affiliate at Leuven International and European Studies (LINES) at the University of Leuven (Belgium), and is the co-editor of the volume entitled The EU Enlargement and Gay Politics: The Impact of Eastern Enlargement on Rights, Activism and Prejudice (Palgrave, 2016).

Bad Behavior has blocked 599 access attempts in the last 7 days.