by the Engenderings editorial team 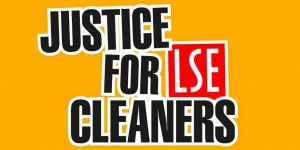 Did you ever stop to think what the LSE would look like, if the toilets and common spaces were not cleaned, and the bins never emptied? Would you be able to attend a lecture, or work in your office if someone had not performed this essential work for you?

This someone is a sub-contracted cleaner, likely to be an immigrant, a person of colour, a woman. They are under-paid, and made completely invisible, even though their work is absolutely essential to each and everyone of us – students, staff, administrators, and users of the LSE’s many services. They work before most of us even arrive on campus, at unsocial hours and over the weekends, and depart before their presence becomes visible.

A few weeks ago, many of us watched a shocking video in which cleaners at the LSE explain that they have been denied access to the 4th floor cafeteria during their breaks by their management, while wearing their uniforms. The problem is, however, that they only have a 15 minutes-long break, and no facilities to change. As such, given the rules in place they are effectively barred from any use of the cafeteria during their scheduled breaks. Following their campaign for access to the cafeteria for their rest breaks, LSE management clarified with the cleaners’ employer that the cafeteria is available for all to use as customers. However, most in-house staff have access to common rooms and kitchen space in their academic or professional service departments, which means they do not need to spend money to access a rest break space. Therefore, it is unfair to make the cleaners’ access to the cafeteria dependent on a purchase. The cleaners’ position on this is clear: it is a blatant act of discrimination, which segregates them from the rest of the staff working at the LSE.

But this is not an isolated incident. Indeed, a number of other exploitative labour practices reflect the unfair working terms and conditions to which the LSE cleaners are subjected. The key issues pertaining to the treatment of the LSE cleaners reflect the ongoing injustices they face as second-class workers at our institution. For instance,

In short, the cleaners are not asking for more than the living wage and parity in some of the most basic terms and conditions of employment. As a result of facing these injustices, the LSE cleaners, along with the union representing them, the United Voices of the World (UVW), are currently campaigning for parity with in-house LSE staff as well as the London Living Wage. The cleaners wish to resolve these issues amicably, UVW General Secretary Petros Elias confirms that:

[the LSE cleaners] have instructed their union, UVW to put the LSE and their contractor, Noonan, on notice that a refusal or failure to confirm by 5pm on Friday, November 18th, 2016, that the two tier workforce that has plagued the LSE for decades will be ended and cleaners will receive equality of terms and conditions with in-house staff, will result in the declaration of a formal trade dispute between UVW and Noonan, as defined by s.244 Trade Union and Labour Relations (Consolidation) Act 1992.

After November 18th, the cleaners will be entering into a formal labour dispute with the LSE, and will be poised for the possibility of a strike action. If they move to strike, this would be the first strike of cleaners at the LSE in the institution’s history.

This unfair treatment of the LSE cleaners, justified by the fact that they are sub-contracted to the LSE by the company Noonan, serves to reflect the broader trend of neoliberalisation of higher education in the UK. This has led to the deterioration of terms and conditions in sub-contracted labour more broadly within institutions, and not only for cleaners. The issue affects many of us in academia as well. For instance, according to the UCU, 45.4% of the teaching staff at the LSE are on a casual contract. Casual contracts can hinder career progression among academics, and offer little job security. Further, the gender pay gap at the LSE is at 18.9%. Given the high levels of inequality and precarity among its teaching staff, perhaps it comes as no surprise that the LSE ranked at 155 on the National Student Survey for overall student satisfaction in 2016.

We do not accept that our university actively reproduces the gender, race and class inequalities it should be resisting, particularly given the LSE’s commitments to build a “diverse, equitable and truly inclusive university.” It is no coincidence that it is cleaning services carried out almost exclusively by ethnic minority and migrant workers that are taken for granted and undervalued. As such, we have begun circulating an open letter addressed to responsible parties at the LSE imploring them to rectify this situation. As one signatory to the petition commented, the failure of LSE to live up to its commitment to diversity has not gone unnoticed by ethnic minority students and staff. So, if the LSE is serious about its Equality, Diversity and Inclusion agenda and understanding Race in the Academy, we urge the management to start with ensuring fair and equitable conditions for outsourced service staff. We join in the LSE cleaners’ demands for justice and equal terms and conditions and employment – they are neither invisible nor are they the dirt we leave behind. We encourage you to support their struggles, for a better, fairer LSE by signing here.

[1] Approximately 82% of professors are White, while for about 11.5% the ethnic group is not recorded in the data available.

Bad Behavior has blocked 401 access attempts in the last 7 days.