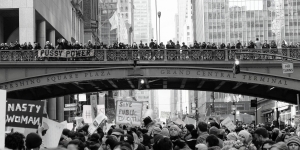 “Yes, fusion is possible but only if things get hot enough – all else is temporary adhesion, patching up.” The Welder, Cherrie Moraga

Recent weeks have felt white hot with mourning, filled with impotence at the path laid out—a path so many of us feel embraces our tendency towards darkness, rather than nudging us towards light.

Like many, I watched the results of the presidential election as if in slow motion, and muddled through the ensuing days with a palpable heaviness, dragged down by the weight of dread, in fear for the real bodies that match the description of “certain people” derided on our screens. But the quotidian beckoned, and life moved haltingly on. My young daughters still needed lunches packed, homework checked, tucking in at night. I began weaving together conversations with my children about right and wrong, about claiming their space and their bodies, about calling injustice by its proper name, for things that are not named crave power. I taught them that Spanish, the language of their mother and mine, is still beautiful on the tongue, and that kindness can still dance on our lips.

I wanted to protect my children, to prepare them, to help them navigate what is taking place. I was also helping myself come to terms with this realignment, deriving a measure of peace from the loving routine of twisting hair into braids and reading bedtime books. It dawned on me that this, this work of child rearing, the repetitive gestures of nurture and love, is also political. While the measure of a woman’s identity cannot and should not ever be tied to whether or not she chose to raise a child, it is also true that for many of us our children are central to what motivates us, to the lens through which we see the world and our obligations to its future. Mothering with intention can be a form of resistance, an act of healing.

I have come to a realization during this depleting election cycle, over 18 months of rhetoric that has done no more and no less than reveal the gaping wounds of this country and the seemingly insurmountable gaps in visions of an elusive and exclusive “real” America. We are not, as some believed, all in this together. That we are at a point of societal division reminiscent of the 1960s is a reminder that the changes begun then were incomplete, with the kernels of possibility and redemption, as well as retribution, sown long ago. The flames were simmering before being stoked, far before they lapped hungrily at our heels.

The “us vs them” narrative of exclusion that foresaw this outcome, seeking to carve the country into halves, is not new. This time, it was simply conveyed with a sledgehammer rather than a scalpel – its effect now clear and irrefutable. It is evident that the nation is divided along many intricate lines. While I empathize with those in economic distress and who have felt underrepresented by government, that empathy does not go far enough for me to participate in my own erasure and that of others, to accept without objection that those who voted in favor of perceived gains also voted against the very safety and existence of fellow humans in their midst, either by design or by accepted consequence. I do not pretend to know how to make the factions of this country intersect, much less unite. I do know that my efforts will be concentrated on the protection and support of those most likely to be affected by the incoming currents, rather than trying to convince significant portions of the population that such solidarity is even warranted. It is a time to conserve energies and choose our battles, to assess the landscape and see where our voices and care are needed most. We, particularly those of us knee deep in the labor of caring work, are already the refuge we seek.

Painfully, the way forward will involve some moving back. It will undoubtedly see losses in political and societal gains that sought to make us all equal under the law. For those who have never felt they had a seat at the table, the unraveling before us is fraught with a fear at once fresh and familiar. Yet I also see friends and allies standing by one another, the wonder of affirmation through dissent. We will have to practice how to look ourselves and our neighbors in the face again, to relearn that solidarity and understanding do not fully manifest online or by proxy, but in person and in real time. 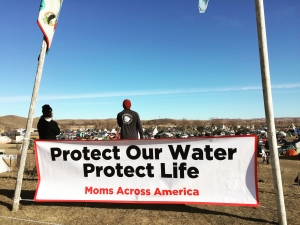 The well-being of those deemed “others” will only be enacted from the bottom up, fostered and nurtured in homes, communities, neighborhoods, and gathering places all over this country. Standing amid the storm will be an endeavor both extraordinary and banal, carried on alongside others in living rooms, classrooms, churches, doctor’s offices and bus stops. It is the work of the door opened, the hand held, the promise kept. A claiming of a sense of safety and belonging, for self and others, must unfold intimately, in the unmeasured moments shared. It is the messiness of daily living. This is the care work beyond the transactional that allows us to truly see and value one another. The personal is indeed political, and the political is stubbornly collective.

There is great power to be harnessed in creating community, in the distinct work of loving and parenting and teaching. When institutions fail us, as they often have women, people of color, and the most vulnerable among us, the intimate spaces are the cracks where the light streams in. Care work, and mothering in particular, possess an agency to be claimed as such, as has been done by women in many contexts and regions: Mothers Against Drunk Driving in the United States, the Madres de la Plaza de Mayo in Argentina, the “politics of nagging” and dogged engagement in education and sports by women in Iran, and many others have sought to leverage motherhood as both a relationship and a change agent, as a means by which to achieve social justice ends on behalf of future generations. In love, we find the battle. Women can be active not despite their motherhood, but because of it. Whereas our culture often defangs motherhood, idealizing it in image and rhetoric in ways that polish its hard edges and obscure the women behind the tasks, in truth nurturing another human being is raw, a self healing wound. There is something indomitable in the building of bonds, and a vulnerability in that fierceness. The willingness to both expand and cede of the self, to renew and stretch our limits for those who walk next, is radical.

I invite one and all who despair at the state of things, but especially those of us who have, by choice or circumstance, accepted the task of nurturing the next generation in any capacity, to tap into the power and the responsibility of our role. Engage your children in the work of acknowledging the intrinsic worth of others, in denying further debasement of what fraying fabrics may unite us. Teach them that fear, when detached from hope, makes the wolf look bigger. This is a time for nurture, but also of refusal. Ours is the moment of bearing witness to courage, such as that shown by First Nations water protectors at Standing Rock, whose labor of love is a repudiation of destruction: holding lands, holding each other, holding onto ourselves. Theirs is an unflappable act of devotion, an affirmation of interconnectedness and a claiming that we can all perform in our daily lives.

I will carry on much of my protest in the quiet space of my home, in the bland hallways of community gatherings, in the red bricked schools where the big hearts and open minds live. I will read to my children and teach them the value of a seed. The smallness of their hands gripping mine holds me accountable. My activism lives in their gaze, as I commit to fostering a world worthy of them.

Scholar-activist Audre Lorde once said, “Your silence will not protect you.” Capitulation erodes possibility and empties us of courage. Let us makes our voices heard, especially to those who hear us whisper comfort. They will inhabit our legacy, the measure of the space between us, hope forged in flame and in love.

Lara N. Dotson-Renta, PhD is a scholar at Brown University, writer, and yogi. She is currently completing a book of narrative nonfiction tracing the history of Puerto Rico through family narratives and shared experiences of womanhood.