About that march on Saturday 21st

About that march on Saturday 21st

An international march was organised by feminist groups across 20 countries last Saturday, 21st of January, following the election of Trump as the president of the United States. This march gathered an important diversity of organisations, making thousands of people unite around the world in protest to Trump’s election, in defence of woman’s rights, and against discourses of hate and racism. Here are the reasons why some of us attended the march, in London and Paris. 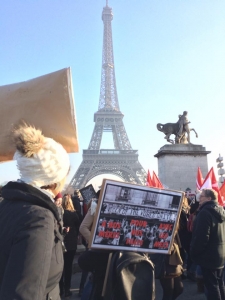 This was one of the chants heard in Paris on Saturday, calling for solidarity with women across the globe. An estimated 10,000 women, men and children marched around the Eiffel Tower from Trocadéro to the Peace Wall. We marched not only to protest Trump himself but to, as one fellow protester put it, “show up with my body and my voice to demonstrate that I do not agree with the racism, sexism, and homophobia that Trump has normalised.”

These are not issues that are unique to the USA and the Trump presidency. Against the backdrop of Brexit, the upcoming French election in which Front National is expected to gain power, and the tide of populism across Europe, the politics of hate is very much a trans-atlantic concern. That is why I marched: I hoped that my presence would contribute to a politics of friendship with all those who are worried and scared for their well-being and security. To be part of the million people across the world who got out to signal with their presence: You are not alone. I do not condone the hate that is directed at you, at us. We may not be scared about the same things, but let’s stand together.

“We don’t want your tiny hands, anywhere near our underpants!” 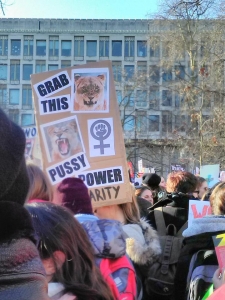 Because I still have not made peace with the fact that a rape apologist, and potentially a sex offender, has been elected at the head of the most powerful country of the world. Because it’s not okay to say we can be
grabbed and get away with it. Because I’m scared of the rise of right-wing populism here in the UK, across Europe, and in the US. Because we, migrants, and migrant women, are tired of being blamed for unemployment, public deficit, extravagant consumption of social benefits, the end of civilisation, and what not. Politicians who oppose immigration in their discourses, and pretend to be fighting for gender equality, are usually quite happy to use women’s labour – and women of colour in particular – in the care and cleaning industries for very low wages and precarious terms and conditions.

Because I don’t think we can promote the success of one country against the well-being of everyone else, and this aggressive nationalist rhetoric frightens me. After 16 years of “war on terror”, our governments are still too ready to accept the deaths of thousands of civilians in Syria and across the Mediterranean sea. Because every single life matters. Because enough is enough!

Be an upstander, not a bystander 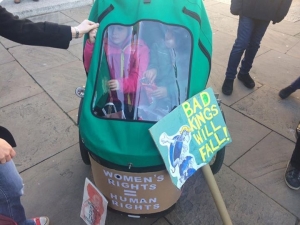 There were so many reasons that compelled me to get up and join the Women’s March in London with my kids. In part it was about a rejection of Trump and what he stands for, but it was also about the same issues on this side of the Atlantic. It was about standing up against sexism and lack of representation in the curriculum and filibustering to prevent a parliamentary debate on introducing proper sex and relationships education, including tackling LGBT bullying, in all UK schools. It was about the National Health Service excluding some women from access to free and legal abortions because of where they live. It was about the government doing too little too late for refugees, including unaccompanied minors; the introduction of fees to bring an employment discrimination claim to tribunal, and the public sector cuts that are closing women’s refuges. As one of my friends said: “This isn’t about the money, the money is there and we are not a poor country despite what people seem to think. This is about what gets prioritised and who is seen as less important”.

It’s so easy to feel overwhelmed, paralysed and on your own when politicians, the electorate and the media across Europe and the US seem to have collectively lost their moral compass; so I felt compelled to show my kids the masses that agree with us. I needed to show them, not just tell them, that while austerity politics and Brexit and Trump may appear to be legitimising misogyny, homophobia and racism, this is not ok, it is not normal and it is not acceptable. And we have to stand up and say so.

Aïko, Louisa and Jenny are members of the Engenderings editorial team.

Bad Behavior has blocked 405 access attempts in the last 7 days.