Masculinities at the Margins: A Feminist Curiosity of Gender, Militarism and War

Masculinities at the Margins: A Feminist Curiosity of Gender, Militarism and War

by Amanda Chisholm and Joanna Tidy 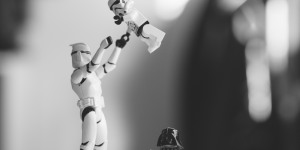 For scholars of feminist IR and those applying a critical lens to militaries, gender and war, military masculinities is a familiar concept—one that tells a story with which we are well-acquainted. This is a story of hegemonic gender power and its performativities and how they structure and sustain institutional violence. The concept has been a foundation for a rich terrain of empirical and theoretical trajectories. It has allowed scholars to approach military power as a question rather than taking it for granted and to deconstruct areas of “common sense” through which gendered military power is reproduced. In this familiar story, ‘the’ combat soldier remains the privileged embodiment of masculinity and privilege, a site where violence is inevitable and necessary and where validity in knowing continues to come through those who invest in and reproduce militarist logics of (in)security.

What, though, might happen to ‘military masculinities’ and the concept’s stories of war, violence and gender, if we begin to account for ‘the margins’ of war, of militaries and of masculinities? How and what might the silences, the ruptures and erasures within the concept tell us about gender and war? Feminist scholarship has begun to ask these questions and subsequently have produced fascinating accounts of where we see war and who we see as the actors (re)producing violence.  For example, Aaron Belkin, Alison Howell, Cara Daggett, Maria Eriksson-Baaz and Maria Stern, Orna Sasson-Levy and Claire Duncanson have all shown that by paying attention to the marginal masculinities, war and violence we can see how profound the reach of militarism is, but also where the ruptures and disjunctures lie in the familiar story of gender, militarism and war.

Like these feminists, we believe that paying attention to the margins of masculinities, war and violence necessitates a re-orientation of where and for what we look for the operation of gendered military power. This focus urges us to consider, for example, how concepts originating from marginal knowledges can be applied to the study of military masculinities, and our responsibilities to the politics of their origins; the (re)production of gendered military power within our conceptualisations; and the possibilities of looking beyond ‘the’ combat soldier, to war’s other people, other bodies and other subjectivities.

In the current special issue of Critical Military Studies we bring together scholars from a range of backgrounds and approaches who also consider these provocations. Individually and collectively these contributors challenge us to reorient and reconceptualise military masculinities, and war, beyond the hegemonic. Henri Myrttinen, Lana Khattab and Jana Naujoks contribute empirical insights that advance our account of masculinities in conflict-affected and peacebuilding contexts beyond the narrow focus on “men and their violences” through simplified accounts of hegemonic and hyper masculinities. Amanda Chisholm explores how the knowledge we produce about militarism, violence and gender cannot be separated from the gendered and raced embodiments of the researcher and those she researches. These embodiments that will always frame our research questions and mediate how we navigate and write about the field. Katharine M. Millar and Joanna Tidy trace how ‘combat’ has been mobilised as a common sense empirical category within critical feminist and gender analyses, importing its normative investments. Sarah Bulmer and Maya Eichler, through their focus on the experiences of veterans transitioning to civilian life, argue for a focus on the unmaking rather than the making of militarized masculinity to re-think key aspects of feminist analyses of war and militarization.

Marsha Henry traces the use of intersectionality in work military masculinities, raising the importance of connecting such analyses to intersectionality’s “‘originary’ black feminist project”. Critical Military Studies’ Encounters section – a space for multidisciplinary forms of critique – hosts a further set of reflections. Marysia Zalewiski asks What’s the problem with the concept of military masculinities?, taking as her starting point the “idea that the concept of military masculinities has become overly familiar and ‘comfortable’, at least within feminist scholarship, and that this ‘cosiness’ is problematic”. Anna Agathangelou offers a de-colonial feminist critique of military masculinities, reflecting on the “living” archival histories of her mother’s stories of war and violence in Cyprus. Finally, Catherine Baker draws our attention to the important work on militarism, gender and war being produced outside feminist IR spaces in her discussion of Holly Furneaux’s Military Men of Feeling (2016).

Each of these pieces speak to and navigate an unease with existing theoretical configurations of the masculinities-militaries-war nexus. Doing so, they open up new avenues and possible directions for future scholarship. These emerging insights by no means indicate that ‘military masculinities’ is dead as a useful concept, rather they explore how it, and we who use it, might remain curious, sceptical and uncomfortable.

This piece first appeared on E-International Relations on 10 June 2017 and is reposted here with permission.

Amanda Chisholm is a lecturer in International Politics at Newcastle University. She is a recent recipient of the ESRC future leaders grant “From Military to Market” and is conducting fieldwork on Nepalese security labour chains in the global security industry. Amanda’s work focuses on the racial and gendered logics and practices that underpin the economies of the global private security industry. Her recent work appears in Critical Military Studies, Globalizations, Security Dialogue and International Feminist Journal of Politics. She has also contributed to various edited collections and handbooks on gender and the military and global private security. You can find out more about her ESRC project here and follower her on twitter.

Joanna Tidy is Anniversary Postdoctoral Research Fellow in the Department of Politics, University of Sheffield. She has published, most recently in International Feminist Journal of Politics, Critical Military Studies, Review of International Studies and International Political Sociology, on a range of topics relating to war, militaries and gender. These include the gender politics of military opposition to war, the visual regimes of war, and everyday war commemoration, nostalgia and conscience capitalism.  Her main current research project focuses on soldiers in jobs that are associated with the ‘rear echelon’. You can find out more about her work here and follow her on twitter.