Bodily echoes: a performative reading of the Feminist Strike in Spain, and beyond…

Bodily echoes: a performative reading of the Feminist Strike in Spain, and beyond…

March 9 arrived, and what had been the first legally approved Feminist Strike in Spain left a vacuum on the streets. All Spanish cities –which had seen time stop for over 24 hours– were now back to the usual schedules, commutes and expenses that mark the routine of the ever-expanding precariat. A thousand individual paths racing across the cities, spurred on by a thousand individual worries. “These aren’t the same streets”, a friend told me over the phone, and I could sense her unease as she tried to get her eyes used to the restored emptiness. The purple and black that had stained Spanish cities all around the country had been washed away by the street cleaning services, leaving the occasional banner or ribbon as material reminders of the bittersweet feeling that follows such occasions: a sense of regression, of having to wake up, of swallowing the euphoric hangover as it turns into renewed resignation. My friend was right, it was unsettling to see the easiness with which normality can restore itself. Time to get back to the conversations that monopolise the political arena, whether it be the relentless touristification of urban territory, or the immobile negotiations between the Spanish and the Catalan governments. Feminism gets a day, move on.

Yet, despite the quick re-ordering of public space, those streets really weren’t the same, but not in the sense that my friend initially presumed. Something had been left, something that exceeded the time, space and bodies contained in the feminist mobilisations. Although the streets went back to their usual appearance, an invisible code of feminist alliance had been engraved on the pavement of all Spanish cities. A longing for collective acting, thinking and living flooded the streets with such unprecedented, and unpredicted, intensity that the tide left a permanent leak after its withdrawal. And, understanding this leak in consonance with Sara Ahmed’s playful theorisation of resistance against the hegemonic power of academic institutions –where, she argues, disruptive ‘uses’ of space can open the possibility of formulating a language of complaint– l agree that “a leak can be a lead”. [1]

This feminist ‘leak’ becomes especially meaningful in relation to a performative reading of street politics. Through performativity, we can understand subjectivity and precarity as resulting from (and contributing back to) hegemonic political scripts, which renew themselves in discursive re-iterations. That is, subjects are constituted as such through circular processes of re-signification, by which certain meanings become sedimented and normalised. What counts as ‘woman’ –for example– is not originary or particular in itself, but responds to a ritualised trajectory of re-deployment and re-adjustment. Along with this subjective entrance into social existence come one’s possibilities of either living a “liveable life”, or of being relegated to the margins of disposability (and all the countless positions between life and death).[2] Although vulnerability, as the prospect of death and suffering, is a shared condition of all bodies, the differential distribution of such a possibility –which Judith Butler has called precarity– is indebted to the particular forms that subjective scripts might take. And by subjective scripts I mean the discursively mediated marks through which bodies are read and ‘placed’ in society.[3] Now, while the weight of sedimentation seems to placate any possibility of conceiving of alternative modes of knowing, doing or being, the loop of signification is never closed. There are fissures, gaps, leaks, where discourse renews itself, thus leaving open the entire political imaginary that determines which subjectivities can count, exist, and live. The question that remains, then, is whether this can happen outside of theoretical speculation. How –if at all –can such performative caveats be seized and re-signified from a position of institutional dissidence? 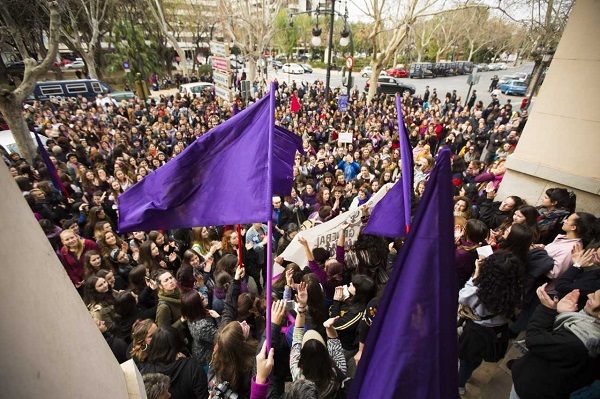 Gathering at the gates of the chancellor’s building at the University of Valencia
Photo credit: Estrella Jover.

When feminists took to the streets on March 8 in Spain, their vociferous presence did not only protest the most visible forms of gender precarity that traverse bodies –and, abstractions aside, I am talking about being systematically silenced, insulted, raped and killed. They also defied the very subjective logic by which bodies are injuriously categorised, named, and constituted. One of the core objectives of the Feminist Strike was to make visible the institutional normality and impunity of gender violence. Essentially, protesters claimed that femicide and rape are not isolated acts perpetrated by exceptionally abnormal or asocial individuals, but ritualised practices by which gender is re-inscribed on bodies. Violence does not happen as an accidental by-product of gender scripts; rather, gender scripts can only happen through violence.

Yet, the mobilisations were not merely responsive, but radically transformative. By turning to the streets, feminist protesters did not only formulate a response to institutional gender violence, but they also articulated the very ‘language’ through which such a response could be made meaningful, intelligible and contagious. Acting as a sort of collective call, the mobilisations stretched beyond the moment and place of action, ‘sticking’ to those dissident, precaritised bodies as a more affirmative mode of self-enunciation. And it is not only ‘women’–as that universalised, white, presumably heterosexual category– that I am talking about. Any body that is read as a threat to the legitimacy of heterosexist discourses –such as racialised groups, trans people, or sex workers– is targeted as a sexual dissident and violently “put in place”.[4] Under this underlying premise of institutional precarisation, the Feminist Strike witnessed the congregation of countless bodies with different bodily inscriptions, and thus different forms of disposability. However, the mobilisations also made evident the imperious need to question and challenge the very politics of representation and visibility within the feminist movement, especially in relation to those subjectivities that differ from, or contest, the hegemony of the white, heterosexual, legally employed, abled ‘(bio)woman’.

Despite the enduring overrepresentation of hegemonic forms of ‘womanhood’, March 8 turned the streets into a heterogeneous assemblage of bodies in dialogue. From this moment of hyperbolic plurality, the congregations started to leave their written trace of alliance on the streets. An alliance based not only on that which is shared and similar, but also on that which marks bodies with social difference. It is not –or it shouldn’t be– about adopting an attitude of political blindness towards the particular forms of violence and resistance that emerge from different bodily inscriptions, since that would only perpetuate racist, ableist, transphobic, classist and nationalist discourses. Rather, alliance must be articulated as an open, mobile, and polyphonic conversation; one which must be spoken from the spaces that open in between bodies, and not within the fixedness of individual borders.

It is precisely through this intercorporeal conversation that language can be re-signified. The body occupies an unstable and contested place within feminist thought; an important part of the movement –at least in its grassroots expressions– understands the body as a radical locus of resistance. I agree with that claim, insofar as it rejects essentialist notions of a pre-social or true ‘body’ as the marker of some universal category. When I refer to the body as resistance, I am not thinking about the body in relation to discursive constructions of identity, such as ‘the feminine’. Rather, the body I have in mind is the body as the sensory condition through which we can feel and make others feel; through which we can relate to others and to other dimensions of ourselves. The body as that relational and unfixable site where alliances can be formed. This body is also that which exceeds the regulations of performative language. In their immeasurable plurality, bodies escape the binding categorisation of social names. Think again of the word ‘woman’ and the infinite corporeal possibilities that are forcibly contained in it. The embodied plurality that took to the streets on March 8 made visible the inconsistency, and failure, of established gender identities; and, this failure or, rather, the disclosure of this failure, constitutes the very success of the Feminist Strike. By collectively disclosing the inherent openness of subjective possibilities, the mobilisations articulated a dialogue of alliance with the potential to defy identitarian positions.

In a sense, then, the Feminist Strike in Spain did not only occupy the streets; it also occupied the very gaps where subjective norms are re-iterated. And this temporary seizing of signification did not ‘go back to normal’ with the dissipation of protesters. As it has become evident by the recent wave of massive mobilisations in Spain against the sentence of the ‘wolf pack’ rape case, the conversations formulated on March 8 have re-signified the collective imaginary of subjective possibilities. The leak has persisted, and has flooded the streets again and again. Dissidence and resistance have been re-formulated as intelligible options, and feminist networks of support continue to expand. Feminist self-defence can take many forms, but, above all, it is the radical notion that a response to the ritualised violence of heterosexist scripts can, and must, exceed the regulations of institutional frameworks. As Verónica Gago asserts, making demands of the state is necessary, but it is insufficient on its own: some form of “collective self-preservation” is needed if we are to live liveable lives while resisting.

March 9 arrived. But nothing has gone back to normal. The streets speak the echoes of those who assembled; the echoes of those who were too many, too different, too loud. Most importantly, those who were there. The strike carried with it the force of past assemblies; those who took to the streets on March 8 embodied the memory of feminist histories of resistance. But also, the genealogy of the feminist struggle is one haunted by absences and silences: as the banners read on the day of the strike, “No estamos todas, faltan las asesinadas” (We are not all here, the killed are missing). Being there meant much more than what the claims, chants and speeches that were vocalised in the mobilisations could express. As Butler has argued, the embodied persistence of those bodies deemed disposable by dense narratives of death constitutes the most meaningful message: “we are still here”. We are here; the ones who assembled, the ones who will come after, the ones who will never come back. We are here with our hopes, with our pains, with our fury. We are here, even with our absences, our silences, our ghosts. We are here. And there. And this there is an unknown place. A constant travelling in between bodies, in between meanings. A fissure that opens. A leak that leads. An in(de)finite alliance of future possibilities. 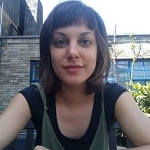 Amanda Mauri Riverola is an MSc student on the Gender programme at the LSE. Her research interests have been directly influenced by the massive feminist ‘turn to the streets’ in Spain, as well as by academic dialogues on vulnerability, performativity, rhetorical resistance and affect. Her dissertation develops a performative reading of feminist street politics, mainly arguing for a re-materialisation of bodily excess as a locus of plural alliances. She is particularly interested in developing the notion of autodefensa feminista (feminist self-defence) as a starting point to articulate collective responses against the institutionalisation of gender precarisation.