When ‘European values’ do not count: Anti-gender ideology and the failure to comprehensively address GBV in Ukraine

When ‘European values’ do not count: Anti-gender ideology and the failure to comprehensively address GBV in Ukraine

This blog post is part of a series of posts on transnational anti-gender politics jointly called by the LSE Department of Gender Studies and Engenderings with the aim of discussing how we can make sense of and resist the current attacks on gender studies, ‘gender ideology’ and individuals working within the field. This post discusses how anti-gender politics have prevented Ukraine from comprehensively addressing gender-based violence (GBV), putting into question the country’s adherence to the ‘European values’ which were at the core of the Euromaidan protests.

In December 2017, four years after the Euromaidan protests erupted, the Ukrainian parliament finally voted to criminalize domestic violence. This marks an important development as violence against women is pervasive in Ukraine, and the conflict which is currently taking place in the East of the country has increased women’s vulnerability to this phenomenon. The recent legislative victory, however, only came about after a majority of the very same parliament surrendered to pressure from the influential Council of Churches, and voted against ratification of The Council of Europe Convention on prevention and combating violence against women and domestic violence, better known as the Istanbul Convention. Ratification would have obliged Ukraine to adopt a far more comprehensive, and therefore likely also more effective strategy to address violence against women. This failure reflects a broader trend in Eastern Europe, with multiple countries having rejected this convention under influence of a strand of conservative, anti-gender ideology, resembling dominant discourse in Russia on this matter. Ukraine, however, is at war with Russian-backed separatist forces in Donbas, and during the last four years has been vocal about its desire to distance itself from Russia, and embrace ‘European values’. In this light, its rejection of the Istanbul Convention seems paradoxical to say the least. This blog, however, argues that this distorted use of the term ‘European values’ fits in a tradition where geographically defined value spaces, regardless of their nature, are prone to be used for the promotion of patriarchal interests rather than gender equality and women’s rights. 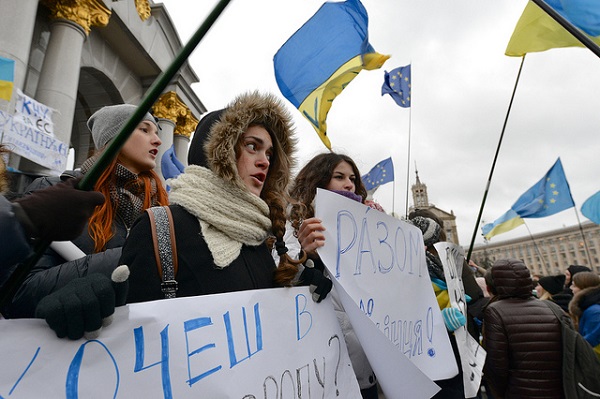 “Students are shouting out for the EU”, Euromaidan pro-EU rally in Kiev, 26th of November 2013.
Photo credit: Ivan Bandura.

Anti-gender ideology and Ukraine’s failure to ratify the Istanbul Convention
While international media have reported on the occurrence of conflict -related sexual and gender based violence in the context of the Donbas war, after the Office of the High Commissioner for Human Rights’ devoted a special report on this issue, little attention has been paid to the everyday violence women are experiencing in Ukraine. UNDP data however, show that while in 2016 174 women died as a direct result of the conflict, 601 were killed as a result of non-conflict related GBV. Women’s rights advocates have pointed out that this large number of deaths resulting from GBV is correlated with the fact that until recently Ukraine’s legislative framework did not recognize domestic violence as a crime. In this light, the criminalization of domestic violence is an important step. However, it also is a messy, second-best solution, as the country is a signatory to the Istanbul Convention, and was supposed to ratify it in 2016.  Ratification would have put Ukraine under a positive obligation to fully address GBV in all its dimensions, which means that it could have been held responsible in case of a failure to adopt measures to prevent violence against women, to protect its victims and to prosecute the perpetrators. However, the introduction of such potentially transformative legislation has been prohibited as a result of a carefully executed advocacy campaign by influential conservative actors, most notably the Council of Churches, who were alarmed by the Convention’s use of the term ‘gender’.

When it comes to its use of the term ‘gender’, the Istanbul Convention clearly states that it considers violence against women to be gender based violence, meaning that it understands that women become victim of this type of violence because they are women. It defines gender as ‘the socially constructed roles, behaviours, activities and attributes that a given society considers appropriate for women and men’ (Art. 3), and calls upon Parties ‘where appropriate’, to take ‘the necessary steps to include teaching material on issues such as equality between women and men, non-stereotyped gender roles […] in formal curricula and at all levels of education’ (Art. 14). These latter provisions have gotten the Council of Churches reeling: ‘such a twisted approach […] can make the Istanbul Convention an instrument for popularizing new “gender roles” and same-sex relations in Ukrainian schools and universities, which would be a disastrous way for Ukraine’. In order to avert such a catastrophic outcome, the Council of Churches successfully used its political weight to convince Ukrainian parliamentarians, who voted on individual title, to reject the ratification of the Istanbul Convention.

A clash of values?
This emergence of conservative, religious forces that engage in advocacy to block the adoption of progressive legislation, and promote the adoption of bills that curb the rights of sexual minorities in particular is not unique to Ukraine. All around what used to be the Soviet Union, countries have witnessed these types of developments aimed at the protection of religious sensitivities. Experts have argued that these developments represent an orchestrated effort by Russia to regain influence in its neighbourhood through the creation of a shared identity which is at odds with what is generally considered to be the Western identity rooted in liberal values. And indeed, during my fieldwork in Ukraine, several interviewees indicated that since 2010 Russia had installed so-called Parents’ Commissions in all former Soviet States, including Ukraine, with the aim to promote traditional/family values, and push back against attempts to introduce ‘gender-ideology’.[1] In relation to these interventions, one feminist interviewee stated that the materials shared by these organizations were so outrageous that ‘in the beginning [they] thought it was funny’. This sentiment swiftly changed when they noticed that these commissions rapidly developed ties with Ukrainian parliamentarians, and that their ideas found a warm reception with the Ukrainian Council of Churches.

However, what is interesting in the Ukrainian context, is that this embrace of ‘Russian values’ has coincided with a period in which Ukraine-Russia relations are at an all-time low. After the successful Euromaidan protests resulted in the ousting of the pro-Russian Yanukovych regime in 2014, Russia annexed the Crimea, and fuelled a separatist war in the Donbass region in Eastern Ukraine. As a result, Ukraine has lost control over large swaths of its territory and counted over 10,000 conflict related deaths. Faced with these grave attacks on its sovereignty, Ukraine has cloaked its current political transition in Russophobe, Europe-centred rhetoric, as reflected in President Poroshenko’s recent allusions that ‘nothing can stand between Ukraine and its European ambitions’. This includes a struggle for what is commonly referred to in the Ukrainian context as ‘European values’. While the notion of European values is not uncontested – more about that later – experts have found that since the Euromaidan, the EU, more than being a geographic area, has been conceived of as a ‘value space’ in Ukraine. This claim is substantiated by surveys that show that especially those who are in favour of closer integration with the EU strongly support the founding principles of the EU being respect for human dignity, freedom, democracy, the rule of law and – a particularly important one in the context of this piece – equality.

Taking into account the Council of Churches staunch opposition against the Istanbul Convention, one gets the impression that they must be against closer integration with the EU. However, nothing could be further from the truth. In public statements the Council of Churches has both rejected Russian interference in Ukraine, as well as called for closer association with the EU. In relation to Russia, leading figures in the Ukrainian Orthodox Church have pushed for a separation from the Russian Orthodox Church based on the observation that ‘Moscow is using its influence over Ukraine in the church as an instrument of hybrid warfare against Ukraine’. This results in a paradoxical situation where the Ukrainian Council of Churches is promoting ‘Russian values’ while advocating for Ukraine’s detachment from Russia.

European values interests
However, statements by prominent figures in Ukraine’s religious movement indicate that from their perspective there is no paradox, as in their understanding traditionalist values are European values. Patriarch Filaret, the head of the Ukrainian Orthodox Church, has for example stated that: ‘It is precisely because Ukraine is a part of Europe that we believe our people have no fewer rights than other peoples to maintain their own identity within the European family and to adhere to traditional spiritual and cultural values.’ And a joint statement by the Council of Churches before the outburst of Euromaidan even referred to Ukraine’s potential role in promoting these ideas throughout Europe:

It is clear that modern united Europe has achieved much, but there is still much that needs to be changed or corrected as in our own Ukrainian home. Traditional religious, cultural, family and moral values, which for centuries have served as the basis for life of the peoples of Europe, are a precious treasure which we should work together to value, protect, defend and multiply.

It is this mind-set, that has for instance guided coordinated advocacy efforts directed towards the Council of Europe, aimed at removing ‘gender ideology’ from the Istanbul Convention.

What this shows is that the concept of ‘European values’ can easily be co-opted by actors with a very different conceptualization of the ‘mainstream’ notion of European values. Now, should this come as a surprise? I already noted in one of the previous paragraphs that the concept of ‘European values’ has not been uncontested. Numerous critiques have explored the colonial connotations of this notion in the context of EU foreign policy. When it comes to women’s rights promotion specifically, experts have found that the EU uses the idea of European values to ‘other’ or exclude third states, rather than as a tool to improve its own actions in for instance the field of women’s rights promotion. And indeed, in Ukraine the EU, despite being a party to the Istanbul Convention itself, had until the end of 2017 not provided any meaningful financial support to combat and address the consequences of GBV, and had not used its significant political leverage to convince Ukraine to head forward in a different direction. So, while the EU does not go as far as conservative forces in Ukraine to denounce ‘gender ideology’, there definitely exists a parallel when it comes to selective engagement with the idea of ‘European values’.  Based on these findings it seems useful to question to what extent geographically restricted conceptualizations of values are useful in the struggle for women’s rights and gender equality. Both Ukraine’s failure to ratify the Istanbul Convention, as well as the EU’s approach to it, suggest that geographically defined values all too easily become a tool to advance the cultural and geopolitical interests of the patriarchal actors that position themselves as the custodians of these values. 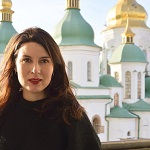 Elise Ketelaars is currently a PhD candidate at the University of Ulster, Transitional Justice Institute, where conducts research on EU support for gender justice in a neighbourhood in transition. She has conducted extensive fieldwork in Brussels, Tunisia and Ukraine. She tweets as @EliseKetelaars_.

[1] These ‘Parents’ Commissions’ have also been set up in Belarus, Armenia, Georgia, and Serbia

Bad Behavior has blocked 1519 access attempts in the last 7 days.